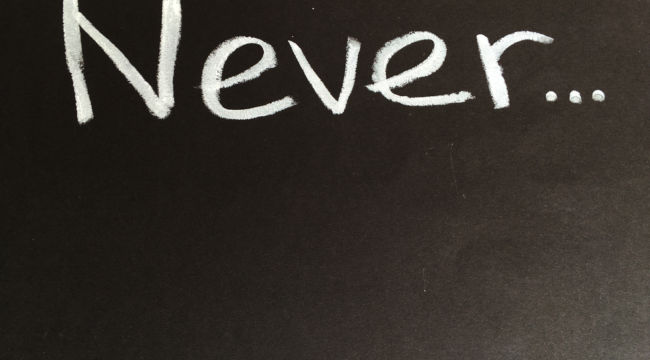 It NEVER Should Have Happened

Another 6.6 million Americans went upon the unemployment lines this week.

A combined 16.78 million have been turned out within the past three weeks — sledgehammering all existing records to pieces.

No superlatives in the English vocabulary equal the cataclysm presently unfurling. A graphic image tells a far more grisly tale: 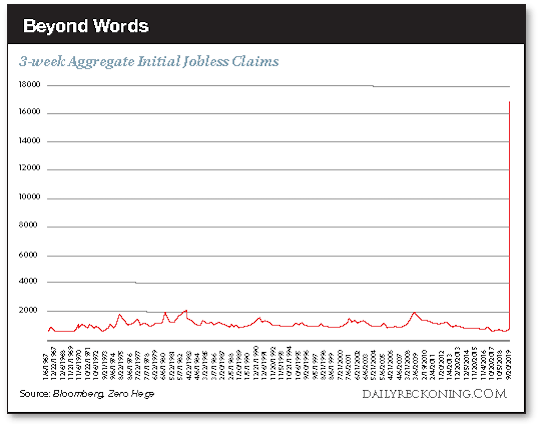 This week’s unemployment filings, compared to the last half century, are considered by frequentist statistics as a 30-sigma event: less likely to happen than if you had to select one atomic particle at random out of every particle in the universe, and then randomly again select that same particle five times in a row.

You proceed to empty it back into the grab bag. You shake the bag good and hard to mix things up. You reach your hand in again — and by a miracle of God — you bring up the identical particle.

You then repeat the process four consecutive instances. Each time you grab the same particle… on all six occasions.

Here you have a “30-sigma” event. This we have just witnessed.

A fellow going by the name Charlie Bilello directs research at Pension Partners LLC. He claims the likelihood of even a five-standard deviation event is “essentially zero” on any given day.

His researches further indicate that Black Monday was a 17-standard deviation event.

Probability theory suggests a 17-standard deviation event should never occur in the entire 4.6 billion year history of Earth. Not once. But it did on that October day in 1987.

That it should never occur in nearly two histories of Earth?

The odds are so staggering, it is as if a tornado roared through a town and the debris assembled spontaneously into a dozen aircraft carriers…

Or that Joe Biden babbled a coherent sentence. Or that Donald Trump recited all the sonnets of Shakespeare backwards.

It is impossible, that is. But there you are.

Is almighty God playing devilish pranks on us? Or are events more prone to these “Black Swans” than the laws of chance suggest? (See Jim Rickards below for the answer.)

But consider your fortune!

If your age exceeds 32.5 years — we presume it does — you have witnessed two events that never should have existed in the entire history of Earth. One should not have existed in nearly two histories of Earth.

“May you live in interesting times,” runs an old Chinese curse.

You do. And they are certain to grow more interesting yet…

The present jailing of the economy will likely continue. The tinhorn tyrants in practice among us insist the incarceration must endure until a vaccine is out.

That of course may be 18 months distant. How can any economy withstand 18 months behind the bars?

It cannot, of course. But assume patches of the economy open by June.

Will Americans throng back to the restaurants, the germ-riddled gymnasiums, the arenas, the theaters, the airports… while the prospect of death by COVID-19 dangles over them?

We are not convinced they will. We have all been conditioned to live in terror of it.

Entire sectors will not recover for years — if ever.

Meantime, the monetary and fiscal responses underway have no equal.

We are borrowing grandly from the future to keep us going today. Thus we are blocking off the channels of future prosperity, so chained down by debt shall we be.

This morning the Federal Reserve announced an additional $2.3 trillion of emergency loans. More will be forthcoming — depend on it.

The Modern Monetary Theory zealots will also leap into action to make a bad situation worse. The Green New Dealers will join them to compound the error.

Other cranks, bounders, charlatans and fools will pour from the woodwork with their own quack cures.

“A little patience,” said Jefferson, “and we shall see the reign of witches pass over, their spells dissolve and the people, recovering their true sight, restore their government to its true principles.”