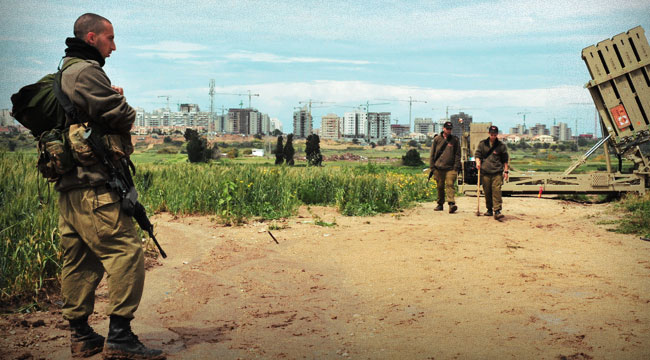 The Middle East mess affects all manner of scenarios for future price and availability of oil in the world. And later on, I’ll discuss a few scenarios.

Recent headlines from the Middle East describe the battle between Israel and Hamas in and around the Gaza Strip. It’s quite a display of ordnance. Since Nov. 16, Hamas has fired nearly 1,000 missiles at Israel — that’s 250 per day, over 10 per hour. In fact, that’s more missiles than the Germans fired at London in all of 1944-45. Most of the Hamas missiles were manufactured in Iran and smuggled into Gaza over the past few years.

Against this steel rain, Israel has employed a remarkable anti-missile system called “Iron Dome.” Basically, Israeli radars pick up Hamas missiles in flight and plot the course and trajectory. If a missile looks like it’ll hit an uninhabited area, the Israelis just let it fly to impact. So what if there’s a hole in the ground, right?

But if a Hamas missile is headed for a populated area, then the Israelis fire a low-cost (about $50,000) interceptor to kill it. The idea is that $50,000 is “cheap” compared with the damage a missile hit could cause, including injuries and deaths.

So far, the Israelis have shot down about 90% of Hamas missiles that could’ve harmed people and/or other high-value assets. Nice shooting, and there are several angles to consider:

As events unfold, other players have chimed in with standard, reflexive anti-Israel, anti-U.S. rhetoric. Neighboring Egypt, for example, is incensed about the conflict, if not very incensed. But not incensed enough to, say, annex Gaza to Egypt and offer citizenship and state-level protection to the people who live in that idyllic garden spot. No way.

Elsewhere in the Middle East, a spokesman for the Iraqi government expressed the idea of Arabs “embargoing” oil exports to the U.S., as punishment for the U.S. “support” of Israel. Of course, the Iraqis haven’t rejected the $4 billion per month of U.S. “aid” that still flows to that country. (Oh, you thought that the expense of the Iraqi war was over?)

Basically, the Israeli ordnance exchange with Hamas has generated plenty of outside blah, blah, blah. Shades of 1973? No, it’s not 1973. It’s a different world. The only gas lines we have in the U.S. are due to Hurricane Sandy, and not to another Arab-Israeli war.

To the north of Israel, there’s an ongoing civil war in Syria. This one is far more deadly than the Israel-Hamas exchange, with close-in combat all around. It’s a bloody, regional version of the “Oil War” scenario that we’ve advanced in OI over the years. Basically, Shiite Muslims are fighting with Sunni Muslims, settling a score that goes back about 1,300 years.

The fighting in Syria has more or less moved to the inner pages of newspapers, and away from network news. Still, every now and again, something interesting trickles out.

Just over a week ago, for example, a Turkish military helicopter crashed in Pervari, in Siirt province of southeast Turkey, near the Syrian border, killing 17 soldiers and aircrew. The official version is that the helicopter went down due to “bad weather.”

Oh, really? Another way of explaining the crash is “surface to air missiles” (SAMs). That is, according to Russian and Israeli accounts, the Syrian government had something to do with that Turkish helicopter going down.

The backstory is that the Syrian government is perturbed that its “rebels” have acquired SAMs from outside interests (guess who) via Turkish routes. In the past couple of months, rebels have shot down Syrian aircraft. Thus, there’s now payback against the Turks from Syria. It’s a tit for tat using SAMs.

Where is this all headed? Well, as they taught us back at the Naval War College, conflict is what often brings clarity to human struggle. Carl von Clausweitz stated it in his own, inimitable way, in his great book On War: “The maximum use of force is in no way incompatible with the simultaneous use of the intellect.”

Just as Israel’s Iron Dome is knocking Hamas missiles out of the sky, revolutionizing military operations and changing political equations on the ground, so is other technology revolutionizing the world of energy.

Last week, the International Energy Agency (IEA) released a report stating that North America leads a “sweeping transformation” in global oil and gas production, based on the fracking boom that we’ve discussed so often in Outstanding Investments and in Matt Insley’s free email Daily Resource Hunter.

In addition to new “supply-side” techniques, in the area of drilling and production, the IEA report focused on how the technology-driven energy revolution is accompanied by a “similarly transformative shift” in global energy efficiency. Indeed, efficiency has a critical role to play going forward.

“By 2035, we can achieve energy savings equivalent to nearly a fifth of global demand in 2010. In other words, energy efficiency is just as important as unconstrained energy supply, and increased action on efficiency can serve as a unifying energy policy that brings multiple benefits.” (Emphasis added.)

According to the IEA, extraordinary growth in oil and natural gas output in the U.S. will cause an upheaval in global energy flows. One section of the IEA report dealt with new policy scenarios, specifically how the U.S. could become a net exporter of natural gas by 2020. Overall, per IEA estimates, the U.S. could become net-energy self-sufficient by 2035 — but to be realistic, it assumes an almost explosive growth in non fossil fuel energy supply (meaning solar and windmills).

Furthermore, according to the IEA, North America is emerging as a net oil exporter, based on growing output from Canada’s oil sands.

North American oil exports will accelerate an ongoing massive switch in the direction of international oil trade. That is, by 2035, almost 90% of Middle East oil exports will sail toward Asia, where China and India will account for 60% of future global energy demand growth. In that regard, the Middle East will become somebody else’s problem. Not a moment too soon, some might say.

From the IEA’s perspective, and within North America and Europe, we’ll see a strong shift toward more energy efficiency, coupled with increasing use of natural gas and “renewable” energy sources. That certainly does seem to be how the current deck is stacked — and I have to note that the IEA report lacks much discussion of nuclear power, which is quite an oversight, in my view.

Overall, though, the new IEA report is useful analysis. It was put together by serious scholars and it’s based on hard data. Still, will things play out as the IEA forecasts? As with all such things, we’ll just have to live that long and see, but it’s always useful to think through the big scenarios.

Whether the IEA is right or wrong — in one respect or another — I believe that the energy biz will remain a key part of the U.S. economy. Energy accounts for literally millions of U.S. jobs, and hundreds of billions of dollars of revenue — including gigantic tax flows to localities, states and the federal government. Energy will grow, not shrink. It’s a goose that lays lots of golden eggs.

To sum things up, the global energy arena is changing in fundamental ways, based on new technology that’s evolving, and evolving fast. Even for energy insiders — and I’ve been watching and working with the energy biz for 37 years — it’s hard to stay abreast of developments that occur at breakneck speeds. Following the energy biz requires immersing oneself in several entire industries, reading trade pubs, wrapping one’s brain around all manner of new tech and visiting labs, facilities, policy salons and more.

By way of comparison, and just as with Israel’s astonishing success with Iron Dome, the new energy revolution is vast. The scope of energy developments has yet to be fully understood and absorbed by political and social thinkers, let alone the multitudes out there who are just doing their thing, following their own pathways through life.

It’s not wrong to say that almost everything that a lot of people thought they knew to be “true” has been overtaken by other events, if not by new technology. And do you know what? I’m thankful for that too. We have a wide-open world out there.