Jerome Powell has the situation in hand.

Most people who want to find jobs are finding them, and unemployment and inflation are low… We think that gradually returning interest rates to a more normal level as the economy strengthens is the best way the Fed can help sustain an environment in which American households and businesses can thrive.

We could lift an objection or three to the chairman’s testimony… but refrain on advice of counsel.

For instance, that nearly 102 million working-age adults are out of the labor force — a number that hasn’t changed in four years.

Or that median wages have gone nowhere for decades.

Or that the current 108-month “expansion” is the second longest in history… and recession is long overdue.

The Fed nonetheless expects to impose two additional rate hikes this year… for a total of four.

Additional hikes are on tap next year.

Six years into the Depression, the American economy was climbing from its sickbed.

The Federal Reserve feared any additional loosening could start an inflationary fever.

And it believed the economic patient strong enough to go on his own steam.

It was time to return to “normal”… as Jerome Powell presently believes.

Christina Romer, former chair of the Council of Economic Advisers, in The Economist:

In 1936 the Federal Reserve began to worry about its “exit strategy.” After several years of relatively loose monetary policy, American banks were holding large quantities of reserves in excess of their legislated requirements. Monetary policymakers feared these excess reserves would make it difficult to tighten if inflation developed or if “speculative excess” began again on Wall Street.

We cannot help but ponder… do not some of these conditions suggest something of today’s?

But the patient wasn’t as hale as the medical men assumed.

It was soon horizontal again … laid up with a wasting disease.

The “recession within a depression” was America’s third-largest downturn of the 20th century.

The Fed reopened its medical bag of easy money in 1938… and the recession ultimately ended.

But Romer warns that the 1936–37 example “provides a cautionary tale.”

The Fed wanted to return to “normal” — just as today’s Fed.

“The urge to declare victory and get back to normal policy after an economic crisis is strong,” affirms Romer.

The economy was too wobbly to stand on its own in 1936.

Is today’s economy too wobbly to stand additional rate hikes?

But comes your objection…

Unlike 1936, the economy is not sunk in depression. The comparison is off.

But here we resort to John Maynard Keynes’ definition of depression:

A chronic condition of sub-normal activity for a considerable period without any marked tendency towards recovery or towards complete collapse.

But it has not grown at 3% since the financial crisis.

Here you have your depression… as defined by Lord Keynes himself.

Regardless, at 2.2% growth, “overheating” would not seem to apply today.

But Jim Rickards argues the Fed isn’t raising rates to break a fever.

It’s restocking its medicine chest for the next recession.

History says rates must climb to 3% or more to tackle the next recession.

The Fed won’t reach its 3% destination until mid-2019 at the going rate — if it arrives at all.

Bank of America has canvassed the entire history of tightening cycles going back over 100 years. 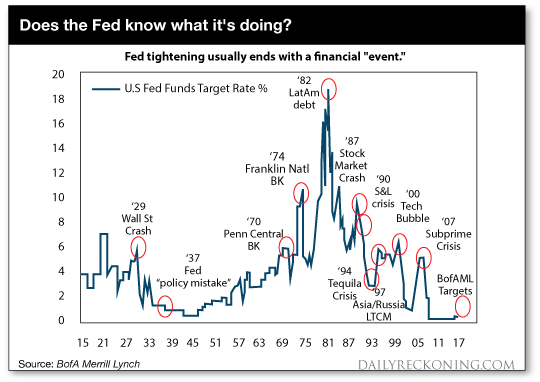 Sixteen of the past 19 rate hike cycles have ended in recession — 84% of the time.

Be it a financial “event” or general economic malaise, the evidence is overwhelming…

Will the Fed cause another 1937-like recession… or some financial “event”?

Jim Rickards believes it could.

The Fed is “raising into weakness,” says Jim.

And that it will have to turn around later this year once the business becomes clear.

We hope Jim is wrong… but fear he is not.

We learn one lesson from history:

That we learn little from history.

It is a lesson we could potentially learn once again — the hard way.