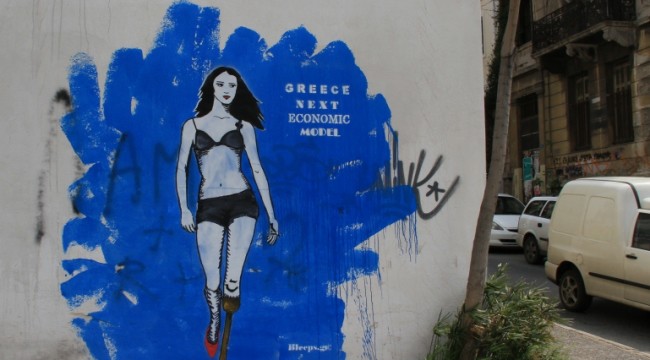 Greece Could Be A Template for U.S. State & Local Gov't Debt Crises

When you can’t pay your bills, you can either cut expenses, borrow money or if you’re extraordinarily privileged, print money.

If you borrow money without cutting expenses, the interest on the borrowed money piles up and you can’t pay that, either.

Then not only do you have a spending crisis, you have a debt crisis, and so do those who lent you the money.

Because the funny thing about borrowed money is it’s a debt to you but an asset to the lender.

Not only is your debt listed as an asset on the lender’s books–it’s collateral that supports whatever financial leverage the lender might engage in.

If you default on the debt, not only is the lender’s assets impaired–all his leveraged bets built on the collateral of your debt are suddenly impaired, too.

The preferred solution nowadays to a spending/debt crisis is to borrow your way out of the crisis: if you can’t pay the interest and debt that’s due, just borrow more to cover the interest payments and roll the old debt into new loans.

In a variation that we can call The Japanese Solution, the lender decides not to list your defaulted loan as impaired–he places your loan in a special zombie debt column–it’s neither a performing loan nor a defaulted loan; it is a zombie loan.

The other solution (again from Japan) is to roll the defaulted debt into new loans at near-zero rates of interest that allow the borrower to pay a nominal sum every month, just to maintain the illusion of solvency. If you owe the bank $10 million, the bank loans you $11 million at .01% rate of interest and you promise to pay $100 a month.

There–problem solved! The loan is now performing because the borrower is once again making payments. But is either the borrower or lender actually solvent? Of course not.

Another trick is to guarantee the borrower is solvent. It’s all smoke and mirrors, of course, but the empty guarantee is enough to smooth things over and maintain the illusion of solvency right up to the moment when the house of cards collapses.

Debt and all these tricks to mask insolvency are scale-invariant, meaning they work the same on household debt, corporate debt and national debt. Many of these scams were used to mask the subprime mortgage debacle, and they are being routinely applied to private and public debt.

To avoid the consequences of losses being forced on over-leveraged private banks and other lenders. Were those losses to be taken, those entities would be insolvent: their assets would be auctioned off, their shareholders, bond holders and creditors would receive pennies on the dollar (if that) and the lender would close their doors.

The losses to the Financial Aristocracy, pension funds, etc. would be immense. So rather than deal with the realities of an insolvent, over-leveraged, over-indebted and intrinsically corrupt financial system, everyone plays shadow games to maintain the illusion of solvency.

If you can’t print money or slash expenses, you have to borrow more money. The more you borrow, the greater the odds that in the next downturn, you won’t be able to pay your bills, the interest on the debt, and roll over debt coming due into new loans.

That’s the template not just for Greece, but for many state and local governments in the U.S. As Gordon Long and I discuss in GREECE: A US State & Local Template?, state and local governments share key characteristics with Greece: they have soaring pension, Medicaid and employee healthcare obligations, but their tax revenues are either stagnant or prone to boom and bust cycles–and the current boom cycle is now entering the inevitable bust phase, when tax revenues plummet but the obligations just keep piling up.

The template of over-indebtedness as a response to soaring obligations is scale-invariant, and it always ends the same way: default, more financial tricks to mask the default, and eventually, insolvency, bankruptcy and massive losses being distributed to everyone foolish enough to choose financial trickery over dealing with reality back when the pain would have been bearable.

As for printing your way out of a spending/debt crisis: that’s just another form of financial trickery that keeps the illusion alive for a few more years.