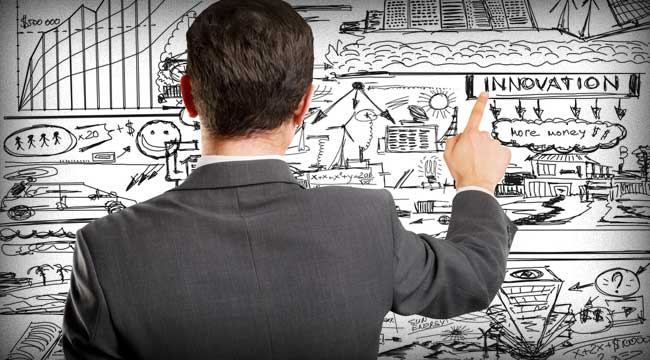 Investing in the New Captains of Industry, Part II

“The first generation of Silicon Valley giants got their start in a garage,” Anderson writes in Makers, “but they took decades to get big. Now companies start in dorm rooms and get big before their founders can graduate.”

That’s impressive progress… but it all takes place in the realm of “bits.” Social media, music, videos — it’s all digital.

“Now the same is happening with physical stuff,” he writes. “Despite our fascination with screens, we still live in the real world. It’s the food we eat, our homes, the clothes we wear and the cars we drive. Our cities and gardens, our offices and our backyards. That’s all atoms, not bits.”

You can have a great idea and design it on your own laptop using computer-assisted design, or CAD, software. Some of the software, like Google SketchUp, is free. Then, just as you can click “Print” on your 2-D printer now, you can click “Make” and send the design to a 3-D printer. “The 3-D printers and other desktop prototyping tools are the equivalent of the cameras and music editing tools” that ordinary people use nowadays in the realm of bits.

Or if your creation is too complex for a 3-D printer using simple plastics, you can send the design to someone across town or across the world to make it for you. “The world’s factories are opening up,” Anderson writes, “offering Web-based manufacturing as an on-demand service to anyone with a digital design and a credit card. They allow a whole new class of creators to go into production, turning their prototype into a product, without having to build their own factories or even have companies themselves.”

Can’t wrap your mind around it? Here’s an analogy from the realm of bits: You can email your digital photos to an outfit like Shutterfly, which sends you back a beautiful customized photo album.

3-D printers — the most basic are now available for less than $1,000 — are only one star in a cluster of technologies that will make it all possible. There are also laser cutters that can slice through wood, plastic or even thin metal. And there are CNC (short for “computer numerical control”) machines. They can work with almost any material in dimensions as complex as your mind can conceive; they’re like the jigsaw you used in high-school shop class, only a heck of a lot more versatile.

“What the new manufacturing model enables,” Anderson explains, “is a mass market for niche products… Products no longer have to reach global markets and find their audience. That’s because they don’t do it from the shelves of Wal-Mart. Instead, they use e-commerce, driven by an increasingly discriminating consumer who follows social media and word of mouth to buy specialty products online.”

Bypassing the Bankers and Venture Capital: Financing the Maker Movement

The means of financing the new industrial revolution are as groundbreaking as the methods of production. The innovators of the future don’t have to prostrate themselves in front of bankers or hand over a stake in their company to venture-capital investors before they even get off the ground.

Makers cites the case of Alex Andon, a guy in San Francisco who set out to make custom tanks for jellyfish. (“Don’t put a jellyfish in a regular fish tank,” Anderson writes. “What happens if you do is not pretty.”)

Ordinarily, such tanks cost thousands of dollars. Andon figured he could do it for less. For a while, he succeeded… but in time, he wanted to produce an entirely new design at a much larger scale. He had a great idea, but he lacked seed capital.

“Over the past few years,” Anderson writes, “a new phenomenon of ‘crowdfunding’ has taken off, by which supporters and potential customers collectively contribute the money necessary to get the product made.

“The one Andon chose was Kickstarter, a website where people post descriptions of their projects and anyone can chip in to help. Rather than just making a donation, most contributors essentially preorder the product by making a contribution above a certain level. In the case of the Desktop Jellyfish Tank, donors who gave $350 or more would be the first to get the tank when it was available, at a lower price than regular customers would pay.”

Under Kickstarter’s rules, Andon set a target to raise $3,000 in 30 days. If he hit the target, everyone who pledged money would have their credit card charged. If not, no one would be charged, and he’d have to figure out another way to scare up the money.

Kickstarter — and crowdfunding in general — started out in the realm of bits; people who wanted funding to record a song or produce an indie film pleaded their case on the Web and accepted donations from whoever was interested. Now crowdfunding is changing the world of atoms, and Kickstarter is itself a multimillion-dollar company.

Anyone Can Be an Entrepreneur: Innovation From the Bottom Up

The future of manufacturing, Anderson writes, is much like the Web today: “ever-accelerating entrepreneurship and innovation with ever-dropping barriers to entry.”

That’s good news for big developed countries like the United States. “Globalization and communications flattened the world once, drawing manufacturing to low-cost labor in the developed world… Now we’re flattening it again, but along a different dimension. Thanks to automation, labor costs are a small and shrinking fraction of the cost of making something.”

Anderson’s own firm, with factories in San Diego and across the border in Tijuana, is an ideal example: “For one of our products, such as a $200 autopilot board, the difference in labor costs between making it in Mexico and making it in China amounts to less than a dollar, or about 1% of the product’s cost.”

“The shape of the 21st century’s industrial structure will be very different from the 20th century’s,” Anderson writes in Makers. “Rather than top-down innovation by some of the biggest companies in the world, we’re seeing bottom-up innovation by countless individuals, including amateurs entrepreneurs and professionals.

“We’ve already seen it work before in bits, from the original PC hobbyists to the Web’s citizen army. Now the conditions have arrived for it to work again, at even greater, broader scale, in atoms.”