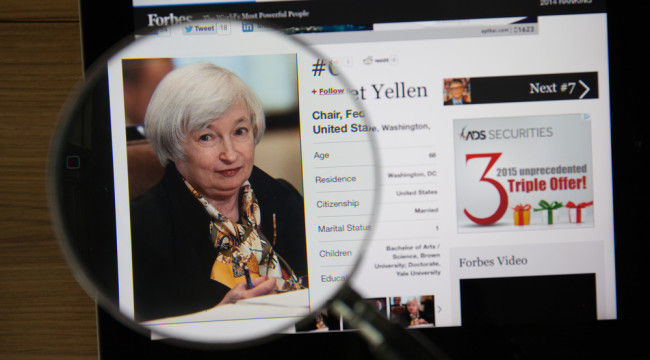 Inside Janet Yellen's Brain at 4 a.m.

Usually, we reserve our pity for the poor, the downtrodden, and the hopeless. But today, we spare a thought for the clueless… and feel Yellen’s pain.

Markets are tense. Investors seem to be holding their breath.

Everyone is waiting to see what the Fed will do.

There must be hundreds of thousands – if not millions – of well-educated adults sitting on the edges of their seats… eager to hear what this rather ordinary functionary will say.

No Return to Sanity

Will Janet Yellen proudly put the Fed on the side of the angels, announcing that she and her crew have decided to move the Fed’s key interest rate to a more normal level… regardless of how much it costs the cronies?

Will she admit that the Fed’s ZIRP and its three QE programs have been failures? Or that they have shifted trillions of dollars toward the rich while leaving Main Street poorer?

Will she beg forgiveness for such errant policy decisions over such a long time and vow publicly never to interfere with the market again?

She will say the outlook is favorable – generally, clearing skies and fair weather is in the forecast. But there are some clouds forming out to the east that could lead to stormy weather.

We don’t know. And it probably doesn’t matter much.

Once you begin manipulating markets, it’s a hard habit to break.

First, investors come to look forward to it. Then businesses become hooked on it. And then you can’t stop even if you wanted to.

After nearly seven years of emergency financial policies, we are now in a permanent emergency.

But it is a phony emergency. Markets are supposed to go down as well as up. They’re supposed to correct their mistakes. They’resupposed to destroy malinvestment to make way for new capital formation.

It’s never been a real emergency; it was capitalism at work.

Poor Janet Yellen must not know what to think.

On the one hand, she is lauded as the most powerful woman in all history. Helen of Troy was a bit player by comparison. Cleopatra was merely the love interest in the battle between Julius Caesar and Mark Antony.

Susan B. Anthony? No one knows what she did… if anything.

But Janet – she has the entire world economy in her hand. She can squeeze it. She can bounce it on the floor. She can do what she wants with it.

On the other hand, there are the dark nights… when she must realize she is in way too deep.

She is supposed to do what no mortal can do. She is in charge of fixing – at least to the extent she is able – the most important price in a market economy: the price of credit.

What’s going on? Has she been set up to take the fall for Greenspan and Bernanke?

But wait… in a fiat money system banks don’t lend out deposits… or even a fraction of deposits. Instead, with a few keystrokes, banks create money ex nihilo (out of nothing) when they lend.

Surely, the head of the central bank can decide at what price banks can rent out capital, no?

If I raise the rate, just a little, I’ll probably be hailed as a sober, responsible economist. After all, it is unnatural for the federal funds rate to be so low for so long.

And those charts and graphs on my “dashboard”… they seem to be saying that things really are returning to normal. People have jobs. The economy is growing. Why worry?

Of course, I know perfectly well those charts are mostly garbage. All the data is so jigged and jived by the back-office boys, who knows what is really going on?

And here I’ve got Bill Dudley at the New York Fed, Goldman Sachs, and Larry Summers all telling me that natural market forces are already tightening credit conditions… without waiting for the Fed. And that if we raise rates now, we’ll just be making a bad situation worse.

Maybe they’re right. But those zero-bound rates must be causing distortions that we don’t know about. The junk bond market, for one. And the corporate bond market, in general. How were we to know those rascal corporate execs would borrow money at our low rates just to goose up their shares, via buybacks, so they could earn even fatter bonuses?

And now, stock prices depend on our ultra-low rates. That’s crazy. They must know we’ll raise rates sooner or later. Then the people who bought stocks at some of the highest valuations in history… like those gamblers at Goldman… they must realize that they’ll lose money.

But what if all these dumb-heads who’ve been gaming the Fed… betting that we’ll keep ZIRPing along for far longer than we probably should have… what if they panic?

What if we get a couple days of 1,000-point drops on the Dow? Won’t they all start pointing their fingers at me… claiming I caused the panic?

Of course, I did nothing of the sort. It’s not my fault they bought stocks at such high valuations. We were just trying to boost asset prices so the “wealth effect” would make Americans rush out and spend.

We have to raise the interest rate at some time, or the entire system will become unmoored… drifting to who knows where… and washing up on who-knows-what rocks.

But what if Larry is right? What if a rate increase makes credit conditions too tight? What if that provokes a sell-off in stocks… and sets in motion a chain of events such as those that led to the Great Depression?

Then stock markets plunge. The “wealth effect” turns negative. World trade collapses even further. Unemployment rises. And we end up in a new depression that lasts 10 years…

Oh, no… It’s not fair… It’s not fair… Boo-hoo… sob… sob… I should have stayed at Harvard. I’d have tenure. I’d have a nice pension. George and I could go to Martha’s Vineyard in the summer. It would be such a nice life.