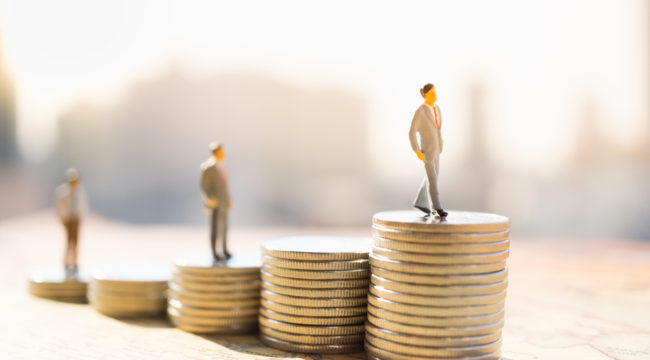 Inflation Can Return Much Faster Than You Think

Consumer price inflation has remained persistently low, despite the Fed’s best efforts. This has led many people to ask where the inflation is, because the Fed has created trillions of dollars since the financial crisis.

But there has been inflation. It’s just been in assets like stocks, bonds, real estate, etc. How about bitcoin? Bitcoin increased about $2,000 yesterday alone! It’s trading at about $16,000 as I write. We’ve never seen anything like it.

The bottom line is, we’ve seen asset price inflation, and lots of it, too.

But the question everyone wants to know is when will we finally see consumer price inflation; when will all that money creation catch up at the grocery store and the gas pump?

It’s difficult to say exactly. But once it does happen, it will likely strike with a vengeance. Double-digit inflation could quickly follow.

Double-digit inflation is a non-linear development. What I mean by that is, inflation doesn’t go simply from two percent, three percent, four, five, six. What happens is it’s really hard to get it from two to three, which is ultimately what the Fed wants.

It’s proving extremely difficult just to get up to two. Personal consumption expenditures (PCE) is the core price deflator, which is what the fed looks at. Currently, it is at about 1.4%, but it’s stuck there. It’s not going anywhere. The Fed continues to try everything possible to get it to two with hopes to hit three.

It’s also a partial function of behavioral psychology. It’s very difficult to get people to change their expectations, but if you do, it’s hard to get them to change back again.

This is another reason why having a gold allocation now is of value. Because if and when these types of development begin happening, gold will be inaccessible.

To this point, I am often approached on, “How can you say gold prices will rise to $10,000 without knowing developments in the world economy, or even what actions will be taken by the federal reserve?”

It’s not made up. I don’t throw it out there to get headlines, et cetera. It’s the implied non-deflationary price of gold. Everyone says you can’t have a gold standard, because there’s not enough gold. There’s always enough gold, you just have to get the price right.

That was the mistake made by Churchill in 1925. The world is not going to repeat that mistake. I’m not saying that we will have a gold standard. I’m saying if you have anything like a gold standard, it will be critical to get the price right. To this regard, Paul Volcker said the same thing.

The analytical question is, you can have a gold standard if you get the price right; what is the non-deflationary price? What price would gold have to be in order to support global trade and commerce, and bank balance sheets, without reducing the money supply? The answer is, $10,000 an ounce.

The math is where I use M1, based on my judgment. You can pick another measure if you choose (there are different measures of money supply). I use 40%. A lot of people don’t agree with that. The Austrians say it’s got to be 100%.

Historically, it’s been as low as 20% so 40% is my number. If you take the global M1 of the major economies, times 40%and divide that by the amount of official gold in the world, the answer is approximately $10,000 an ounce.

All those numbers are going to be different based on the inputs, but just to state my inputs, I’m using global major economy M1, 40% backing, and official gold supply of about 35,000 tons.

Change the input, you’ll change the output, but there’s no mystery. It’s not a made-up number. The math is eighth grade math, it’s not calculus.

That’s where I get the $10,000 figure. It is also worth noting that you don’t have to have a gold standard, but if you do, this will be the price.

The now impending question is, are we going to have a gold standard? That’s a function of collapse of confidence in central bank money, which is already being seen. It’s happened three times before, in 1914, 1939 and 1971.

Each bailout gets bigger than the one before. But the Fed is not in a position to handle another crisis with its traditional tools. It’s currently very low on“bullets.”

The Fed has been raising interest rates not because they’ve been justified by the economic data, but because it’s out of bullets and needs to raise rates so it can lower them again in event of another recession.

And despite the recent hikes, rates remain very low. If the next crisis is bigger than the last one, which I expect, the Fed is basically tapped out.

Of course, raising rates could cause the very recession the Fed’s trying to prevent. But that’s why it’s raising rates.

What about next week? Will Janet Yellen raise rates?

There’s not much middle ground between Democrats and Republicans on spending policy issues like immigration, Trump’s Wall, Obamacare bailouts, and a host of other hot button issues.

So, there’s an asymmetry in the probable outcomes. If you go long euros, gold, yen and Treasury notes, you won’t lose much if the Fed hikes (assuming no geopolitical shocks), but you could win big if they don’t.

That’s the kind of coin toss I like. Heads I win, tails I don’t lose.