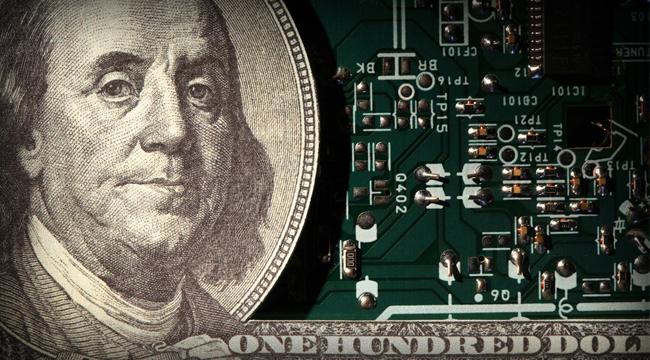 If It Moves, Tax It

A contributing factor in the rise of Internet commerce, a feature that gave it a kick-start, was that you didn’t have to pay sales tax on what you purchased out of state. Ah, the glory days of the 2000s, when you could order anything and, for once in your life, not get hammered by the government. It was not a free market, but freer than most anything else you could find.

This is a major factor in why, despite every prediction that it could never work, Internet commerce rose from the ashes of the dot-com crash to become a huge and growing profit center today.

Alas, those days seem to be coming to an end. And why? Because the U.S. Congress is highly sympathetic to the plight of its state-based cousins, who are starved for money. As a proposed fix, Congress is suggesting a new innovation. Congress wants to give the OK to states that want to take your money.

Here is one argument you will not hear in the debate over taxing Internet sales: This will be good for the business climate. Instead, the debating points concern how much revenue it will raise for states, how onerous the burden will be for small business, whether it is “fair” to brick-and-mortar shops to pay and for online sellers not to pay, and so on.

The real issue — whether this is good for business and prosperity — is not even on the table.

Will taxing all Internet purchases harm business, harm job creation, harm the profitability of those who have seized on digital venues as a viable commercial space? Of course it will. There can be no doubt. The question then becomes: Why is the political class interested in unleashing state legislatures to collect sales tax when it is so obviously harmful to prosperity?

Maybe the answer is obvious, but it still needs to be said. Despite the stump rhetoric, the political class is not interested in fostering a vibrant commercial life to help you and me get by in this world. Instead, it is interested in extracting as much revenue as possible from the existing commercial environment. The government elites want their cut, regardless of the consequences.

You can learn something about the way the world works just by watching the way this legislation is coming down the pike. Here we are, still in a deeply struggling economic environment. Young people have a hard time getting jobs. Growth rates are anemic. Families are still smarting from the surprise payroll tax increase earlier this year.

Online commerce — with low startup costs and a potentially unlimited market — actually represents a ray of hope. This is especially true for young and tech-savvy people.

So what do the politicians do? They plot another hammer blow. Even by old-fashioned Keynesian standards, this is the worst possible time to enable vast tax increases across all states that hit millions of people. But economic rationality is not high on the list of values held by Capitol Hill.

If it is true that political actors only want to get the government’s beak wet and otherwise don’t care a flying fig about the consequences for you and me, many theorists are going to have to go back to the drawing board. The bulk of writing on political economy over the last hundred years might as well be pulped.

There is also an interesting dynamic taking place in terms of those pushing for the change to allow states in which there is no physical presence of the relevant Internet retailer to tax purchase. The world’s largest and most successful Internet retailer, Amazon.com, is backing the change, and paying politicians left and right to go along.

Why? Here, we need to understand something about way regulations are used as a competitive tool in the world of enterprise. The larger the business, the more it is in a position to absorb new regulatory costs. The regulations will invariably hurt the little guy more than the big guy. Therefore, even though the big guy is paying more, the regulations end up working as a kind of subsidy to keep competition at bay.

Not to put too fine a point on it, but Big Business and Big Government work together. Does that sound like a wacky conspiracy theory? It shouldn’t. The reality goes back at least 100 years. Big Business was a huge supporter of the Progressive Era regulations of food and safety, the New Deal’s interventions on prices and labor, the Great Society medical expansions, protectionism during the 1980s, and almost every other major intervention in free enterprise in the annals of history.

Sometimes the biggest enemies of capitalism are not socialists, but the capitalists themselves. They don’t like capitalism because they don’t like competition, because it threatens their business and their profits. A real free market has winners coming and going. But a heavily regulated markets entrenches elites who are working with the political establishment.

You might think that this would cause left liberals pause, but apparently not.

Here is what the blog at National Public Radio said about an Internet sales tax:

“Collecting state and local sales tax all around the country would require a fair bit of effort on the part of online retailers, because sales tax rules vary from state to state. That’s not a huge deal for a giant company like Amazon, but it would be more of a burden for smaller online retailers. From Amazon’s point of view, that’s a good thing — it makes life harder for Amazon’s smaller competitors.

“That’s why big businesses, despite what they may say, often like regulations. They make life harder for small, would-be competitors.”

The Amazon sales tax case is complicated by the fact that it is already mostly paying these taxes because many states started interpreting the law to mean that if there is a warehouse in the state, it is subject to tax. Amazon has warehouses all over the world so that it can offer same-day delivery. That allows it to go after physical stores with even greater intensity.

The average eBay mom and pop is not going to be in a position to file tax statements to every state where it shipped goods. Amazon will be there to not only comply, but have the competitive edge on everyone. The battle between Amazon and eBay has been so intense that the Internet Association has refused to take a position.

This is how business becomes cartelized. There is still competition, but it is not on a level playing field. You have to be heavily capitalized just to get your foot in the door. Then people look at the configuration of the remaining industries and scream, “Hey, business is too big and too powerful!” But they don’t discover the reason. It is too far back in time. And the cause and effect is too opaque to the casual observer.

It’s not hard to imagine the consequences. There will be fewer startups because the accounting costs of filing with states every month will be too daunting. Consumers will start looking at overseas merchants to buy their goods — as they are already doing for cigarettes, prescription drugs, and electronics. Digital currencies will help facilitate this move.

Meanwhile, the domestic market using government currency will be dominated by just a few players.

Everyone these days is sitting around regretting the way the recession just goes on and on, seemingly without end. If you are looking for the answer, look to Capitol Hill. Every time free enterprise tries to come up for air, the Congress and the regulators are there to put it underwater again.

If you have money in GoPro, there’s one very important reason to get it out now. Ray Blanco examines this hot tech trend, and how to avoid making a common investing mistake. Read on to see why GoPro is a No-Go…