I Sure Am Glad There's No Inflation

I sure am glad there’s no inflation, because these “stable prices” the Federal Reserve keeps jaw-jacking about are putting us in a world of hurt.

We are constantly bombarded with two messages about inflation:

Those of us outside the inner circles of power are glad there’s no inflation, because we’d rather get more for our money (deflation) rather than less for our money (inflation).

You know what I mean: the package that once held 16 ounces now only holds 13 ounces. A medication that once cost $79 now costs $79,000 (this is a much slighter exaggeration than you might imagine).

Our excellent F-18 Super Hornet fighter aircraft cost us taxpayers $54 million a piece. Now the replacement fighter, the wallowing collection of defective parts flying in close proximity known as the F-35 costs $250 million each–unless you want an engine in it. That’ll cost you extra, partner.

I have to say, I’m scratching my head here because the cost of things has gone up a lot since 2000. 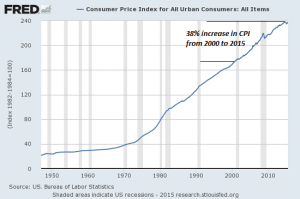 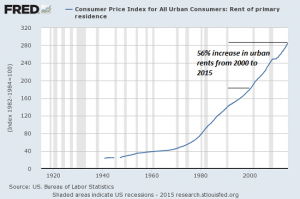 State and local government taxes are up 75% since 2000. And this doesn’t even include the rip-off fishing license fees that have gone through the roof, the boat registration fees that have shot to the moon, and the legal-looting parking ticket that used to be $12 and is now $60.

Taxes naturally rise with the economic expansion due to rising population, which has gone up about 13.8% since 2000: from 281 million residents of the USA to 320 million in 2015.

So taxes rising a few percentage points each year along with growth and population would make sense. But 75%? 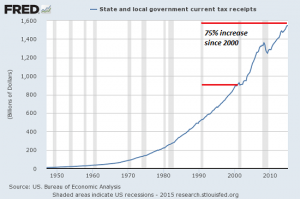 I’ve got a real treat for all you parents, uncles, aunts and grandparents who are planning to put the kids through college: the costs have only risen about 100% since 2000.

That means instead of scraping up $80,000 per kid (assuming they can get all their required classes and grind the thing out in four years) you now need to scrape up $160,000 per kid.

I’d say putting the increase at 100% is being conservative.

I sure am glad there’s no inflation, because these “stable prices” the Federal Reserve keeps jaw-jacking about are putting us in a world of hurt. If we had honest-to-goodness inflation, that would push us right over the edge.