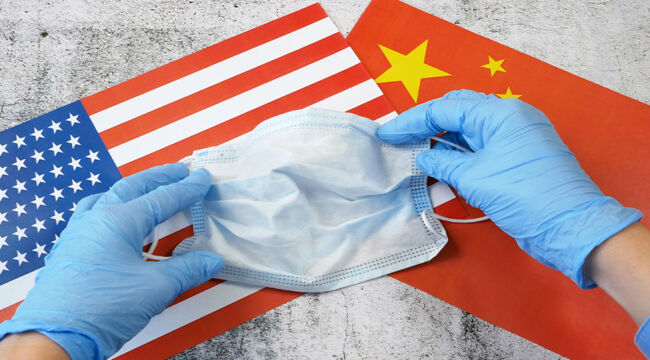 How U.S. Could Make China Pay for COVID

As my readers know, I don’t like to get into politics in my analyses; I cover economics and capital markets. That said, there are times when politics are so focused and powerful that we have to pay attention because the impact on markets will be enormous.

This could be one of those times. House Minority Leader Kevin McCarthy, a Republican, has written an open letter calling on Congress to investigate the origins of the COVID pandemic and to hold China responsible if the evidence points in the direction of intentional or reckless conduct on the part of the Chinese.

That much is part of the normal political give and take. Republicans want to focus on Chinese wrongdoing and evidence that Dr. Anthony Fauci facilitated such wrongdoing with U.S. taxpayer dollars funneled from the National Institutes of Health through third parties.

The investigation would look at so-called “gain-of-function” research in which virus genomes are intentionally manipulated to make them more dangerous. There’s even good evidence that the Wuhan Institute of Virology, where the virus likely escaped, is run by the Communist Chinese military.

The possibility is open that the virus that caused the pandemic was a bioengineered weapon designed to kill as many people as possible.

Whether it was released on purpose or, more likely, escaped through negligence does not alter the fact that the Chinese created a killer virus and covered up the initial release.

Of course, any talk that the virus came from a Wuhan lab was dismissed as a crazy conspiracy theory peddled by Trump. To acknowledge that possibility was seen as an endorsement of Trump, so the mainstream media reflexively dismissed any such claims. Social media banned any post alleging that the virus originated in a lab.

I argued that the virus likely came from a lab in my book, The New Great Depression. I came to that conclusion a year ago. Only now is the mainstream media and their social media bedfellows acknowledging that the lab theory is plausible (see below for one possible explanation for the media’s about-face).

Regardless, the result is almost 4 million dead worldwide, including more than 600,000 dead in the U.S. alone.

In contrast to the Republican position, Democrats led by Biden are trying to downplay any investigation into China’s role by fobbing it off on the intelligence community, which will result in inaction.

Well, here’s the market angle: the McCarthy letter includes the following in his demands:

How to Make China Pay

Skeptics then say that even if a judgment were obtained, it would be impossible to enforce the judgment against China.

Actually, that’s the easy part. A U.S. federal judge could order the transfer of China’s $1.4 trillion in U.S. government securities to a custodian to be administered for the benefit of COVID victims.

China could not stop this because Treasury securities are held in digital form on a ledger controlled by the Treasury and the Federal Reserve. A few keystrokes could deplete China’s liquid reserve position by more than half. I wrote about this possibility last year in The New Great Depression.

Now, it could become a reality if McCarthy’s legislation is adopted. This won’t happen until after the 2022 midterm elections at the earliest. But, you can be sure China is paying attention and is already reducing its Treasury position just in case.

But the theory that the virus came from a Chinese lab may be about to receive major support, coming from a source high within China’s intelligence services…

James Bond fans (myself included) imagine that the best intelligence comes from secret agents who move covertly in enemy countries, recruit sources, gain access to secret documents and then bring that information back to headquarters.

The name for this technique in the CIA’s clandestine service, officially the Directorate of Operations, is HUMINT, short for Human Intelligence.

There are significant collections from spies, but most intelligence actually comes from electronic signals (known as SIGINT) or from defectors. The defectors are the most valuable source. They can simply walk into a U.S. installation such as an overseas embassy or U.S. office of a branch of the intelligence community and offer to tell everything they know.

Sometimes the defection is more dangerous, such as when the defector is still in his home country and has to be smuggled out by some means to avoid arrest and certain death.

Their information is so valuable because it’s fresh, first-hand, and includes data and insights that no secret agent could ever get on his own.

The most knowledgeable defector in history may have just turned up at a U.S. agency with “terabytes of data” on portable electronic devices ready to provide inside information on the Communist Party of China.

The defector’s name is Dong Jingwei, and he was the second-highest-ranking official in the Ministry of State Security, which is China’s internal state intelligence service.

Dong reportedly has information on the Chinese spy network in the U.S. and on the fact that the COVID-19 virus was engineered in the Wuhan Institute of Virology.

There’s some debate about the authenticity of this story. Last week, China issued a news report saying that Dong was at his desk conducting business as usual. The problem was that no photos of Dong were included with the story. Some China experts say that the absence of photos indicates that the Chinese denial is propaganda and the defection story is true.

If the story is true, it explains why the mainstream media are suddenly giving credence to the laboratory leak theory of the pandemic after a year of denial. They know the true story is coming out through the defector, so they want to cover their own tracks as puppets of Chinese propaganda.

I’ll continue to follow this. For now, it appears the defection story may be true, and the U.S. may have been handed the greatest intelligence bonanza since…. well, since James Bond.