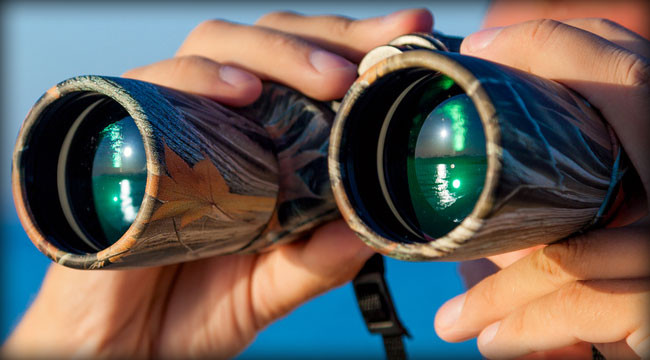 How to Profit From Stealth Inflation

Federal Reserve chairman Ben Bernanke climbed high on top of his monetary mountain last week and yelled down to the masses “Hey, you all down there… inflation still isn’t a problem! So I’m going to keep the possibility of more money printing on the table, OK?”

Could it be possible that the chairman is being a bit too overoptimistic about the stability of prices in the United States?

Is inflation as simple as Bernanke makes it out be — just a single, quantifiable number?

The economy is a complex system. Distortion in one of its key elements — money — can have many seen and unseen effects.

But there’s a far more vicious form of inflation that I have seen developing over the past few years — and no one is talking about it.

I call it stealth inflation. And as bad as it is, I’ve found a way for you to beat it. Let’s take a look.

Murray Rothbard describes this phenomenon on Page 40 of his great book What Has Government Done to Our Money?:

“…[inflation] will lead to a decline in the quality of goods and of service to consumers, since consumers often resist price increases less when they occur in the form of downgrading of quality.”

Take a look at Kimberly-Clark Corp., makers of Kleenex and other consumer products. A recent article in the Wall Street Journal points out that they’ve quietly… slowly… been “de-sheeting.”

De-sheeting is the reduction in the number of sheets of toilet paper or tissues in each package while holding retail prices constant.

You see, you used to have to buy a box of Kleenex’s every 50 sneezes. But now you’re only afforded 45 sneezes. Then you need a new box.

But the price of that box has stayed the same.

The beauty of the de-sheeting process is that it is very hard for consumers to detect. The product development team at Kimberly-Clark works to make sure that the consumer does not notice a reduction in quantity.

And they aren’t the only ones.

The article mentions two other large consumer goods manufacturers: Procter & Gamble and Georgia-Pacific. All of these big players engage in a similar strategy.

The Wall Street Journal comments on this trend of package shrinking and de-sheeting. They remark that this process is done “as an alternative to hiking prices in the face of higher raw material costs.”

We can even see the direct effects of this in the recent earnings released by Kimberly-Clark.

Their reported profit rose 5.6%, to $526 million. Yet sales stayed flat at $5.3 billion. This is where the stealth inflation comes into play.

It is a last-ditch effort for these large companies to meet — and exceed — Wall Street analyst estimates.

But stealth inflation goes only so far. Eventually, profits of these toothpaste, toilet paper and tater chip companies will stagnate.

Now, what can you do to beat the further price increases (or quality reductions) that are sure to come?

You can buy the small companies that — unlike the big boys — can still radically grow their earnings.

Oftentimes, these “small guys” produce very niche products that none of the bigger players make. Some have very few — if any — competitors.

Lower competition leads to stronger pricing power. As prices increase, microcaps can pass on these price increases to their customers.

Another benefit of these tiny companies is that they tend to go undetected by Wall Street (I should know — I used to work there).

With a lack of coverage, there is oftentimes an information gap. Key information may not be reflected in the current share price, allowing investors to profit if they do a little extra homework.

Within the microcap universe, you should look for a few things.

First, you should look at revenue growth.

If a company has been able to grow revenue during the past five years, it would appear they have strong pricing power. This means they are able to pass along price increases to their customers. Or their products are in such high demand or are so innovative that customers have no choice but to pay.

After looking at revenue growth, you should look at gross margin.

Is the company able to grow revenue and expand their gross margin?

To put it another way, is the company able to make more gross profit for every additional dollar in sales growth?

If it’s been able to expand this over the past five years — while at the same time increasing revenue — it could be a hidden gem in the microcap universe.

To help you get started, I found a few companies that meet these criteria. Of course, there is still more analysis to do before making an investment decision. But at an attractive price, these companies could be real winners in the long run… helping you beat the stealth inflation that’s here at our doors. 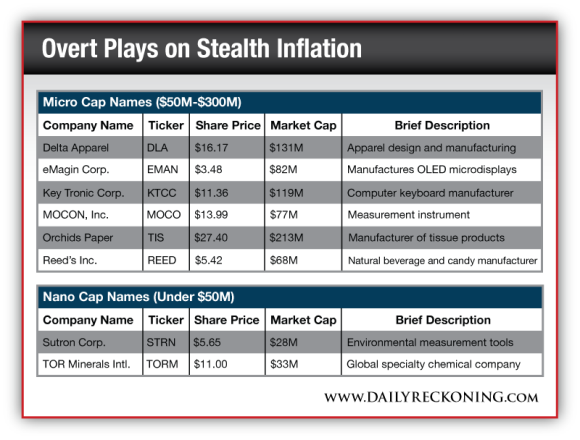 Ed. Note: As Thompson correctly points out, there are still some great ways to avoid the adverse effects of stealth inflation. These microcaps are just one example. Readers of TheDaily Reckoning email edition receive a wide variety of opportunities to profit, no matter what the market throws at them. If you haven’t done so yet, sign up for free, right here. You’ll receive The Daily Reckoning, straight to your inbox each day, around 4 p.m., complete with all of its useful insight and analysis.