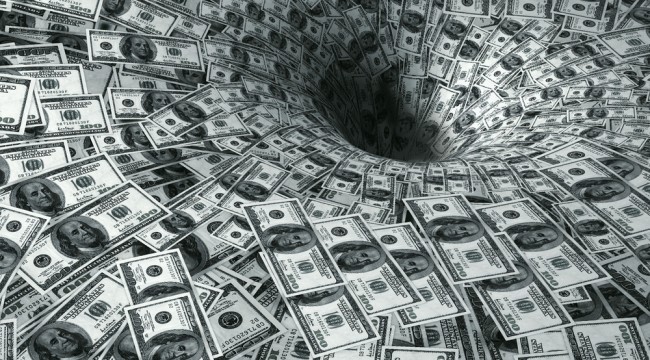 How to Prepare Yourself for the End of QE

Sometime this fall, the Federal Reserve will remove the punch bowl it has had out for more than 5 years. That is one long party! What will the party goers do when that bowl gets removed? The punch bowl to which I refer is Quantitative Easing (QE). QE was the Fed’s attempt to shore up the economy through the purchases of securities. The Fed made these purchases in order for banks to have more robust balance sheets and thus make more loans (i.e. expand the economy). The Fed was turning debt paper into cash. Of course, the Fed creates this cash with a keyboard stroke. As I noted in another article, that cash has not funneled into the economy.

There have been 3 phases of QE. In Phase I, the Fed purchased about $1.3 trillion of bank debt, mortgage-backed securities (MBS) and Treasuries. Phase II saw the Fed ponying up for $600 billion in Treasuries. The last phase witnessed Fed purchases of up to $85 billion per month of MBS with gradual tapering throughout 2014.

Consider that in the spring of 2009 the Fed owned less than $500 billion in Treasuries. That figure is now $2.4 trillion. So in 5 years they “bought” nearly $2 trillion in Treasuries. During those years, the federal debt increased $6 trillion, thus we can extrapolate that the Fed bought $1 of every $3 of debt issued. The next figure is sure to astound you even more (Figure 1). 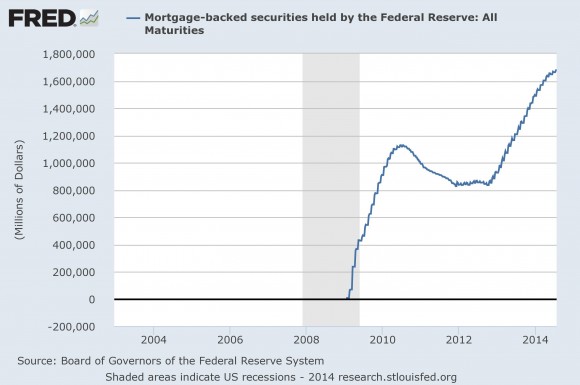 According to Fed data, the central bank of the USA owned no MBS until January of 2009. They now own nearly $1.7 trillion! In roughly 5 years the Fed added a little south of $4 trillion in assets to their books. This is $4 trillion in cash that, in theory, was available to circulate in the economy.

[On a tangential note, the Fed has an $11 billion dollar asset called a “Gold Certificate Account”. In 1934 the Fed had to give up its gold stock to the U.S. Treasury. The Treasury issued certificates against this transfer. The Fed values this gold asset using the statutory price of $42.22/oz (I am not kidding).]

Roughly 84% of the Fed’s $4.4 trillion dollar asset balance arrived in the books from 2009 to the present. In summary, the Fed purchased trillions in debt that the market was unwilling to buy at prevailing prices or perhaps was unwilling to even create under the extant credit conditions. For example, it’s probably a lot easier to make a loan if you know the Fed is going to take it off your books and turn it into cash no questions asked. Has all this Fed action helped, and perhaps more importantly, what will happen when the Fed decides to pack up and go home?

First, let’s take a look at how the mortgage business has been affected by the Fed purchases of MBS. During the 5+ year period of $1.7 trillion of MBS purchases, total mortgage debt fell by about $1.5 trillion (Figure II). 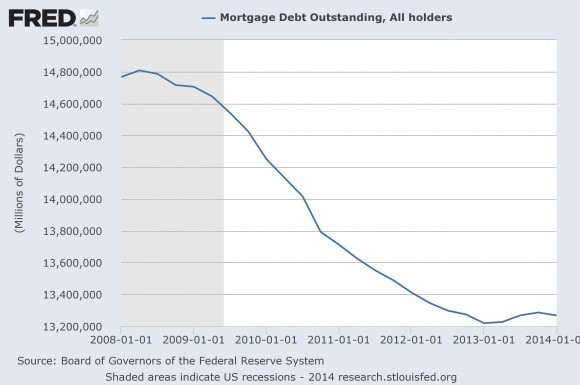 As I have written in E$caping Oz and other publications, the U.S. economy entered a new deflationary (deleveraging) phase that has very real psychological components (and yes some prices can rise during a deflationary phase). Rest assured mortgage rates would have been higher and some mortgages may not have been written at all without Fed or other Government Sponsored Entity (GSE) help. But it is apparent that Fed purchases did not expand the housing market – at best the rate of contraction slowed. It also appears that an unusually large number of real estate transactions are occurring with cash. Of course many of those cash transactions are not for owner occupiers, making the housing market more fragile. It’s one thing to own a home and be underwater – that is the roof overhead. It’s purely another to be an investor who is only looking for a return. The former cannot easily head for the exits, while the latter can.

The withdrawal of the Fed from the MBS market means other players will have to fill the void or quite simply the MBS market will be much smaller. Mortgage interest rates cannot maintain their attractive level if others do not fill the void. Foreign ownership could certainly increase. In fact, foreigners have not been shy about diving into the U.S. debt market as evidenced by their robust purchases of U.S. Treasuries (Figure III). 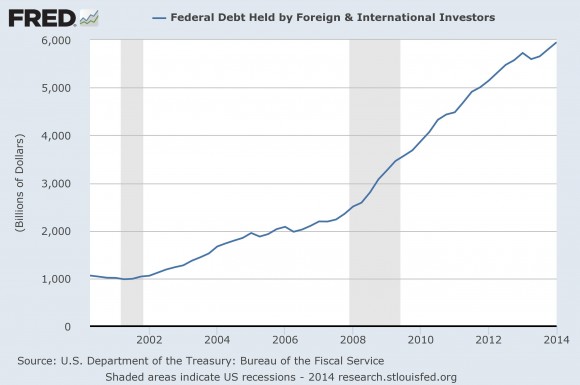 Another scenario could envision an increase in foreign cash purchases. Foreign in this case could refer to the Chinese who may flee their overheated property markets. That said, foreign investors are usually at the tail end of financial trends and this one is no exception. Recall Japan Inc. and their purchases of U.S. property in the late 1980s. Foreign investors could buoy the market but only for a limited time. Demographic trends are also not favorable to the real estate market with a Boomer population that is largely beyond its peak spending years, a smaller Gen X, and a student debt-laden Generation Y. Given the contraction of mortgage debt over the last 5 years despite aggressive Fed purchases, it is difficult to envision an increase in this type of debt when the Fed goes home. As I also stated, cash buyers probably have different intentions.

How might the Fed’s withdrawal from QE affect the U.S. Treasury market? The Fed has not been shy about purchasing Treasury debt (Figure IV) and neither were foreign investors. 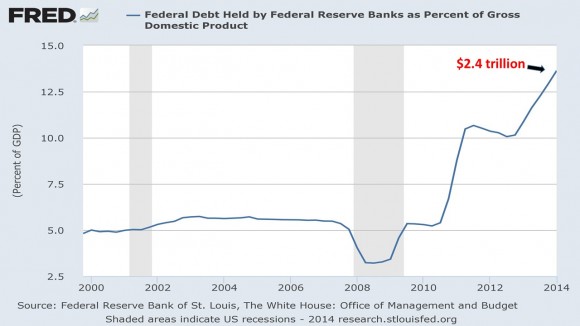 The U.S. public has not been shy either. As percentage of GDP, federal debt owned by the public was higher only in the late 1940s. This is understandable since the country mobilized for armed conflict (WWII) requiring the government to consume a large part of the economy through war production. I do believe a major low occurred in long-term Treasury rates in 2013. Even though rates are still historically low, Treasuries maintain their flight to quality status. When, not if, the stock market experiences its next major decline, investors will rush towards Treasuries. Long-term Treasuries, however, still do not reflect the credit risks attendant to a debt issuer even with the long history of the United States. From a historical perspective, considering credit risk, there are few reasons for rates to be this low. In 2007, 10-year rates were double what they are now and the U.S. is not a better credit risk now versus then. Our Federal debt exploded and contingent liabilities have gotten larger. E$caping Oz illustrated what a comparable FICO score might be for the U.S. government and it was considered a fair credit risk at best. So despite any future flight to quality, Treasuries will trend lower (higher rates) though the specific timing and level is difficult to know.

How might the withdrawal of QE affect other areas of the economy? One measure of economic activity is the velocity of money, which is the number of times a dollar is spent to buy goods/services over a unit of time. The faster money is turning over, the brisker the economic activity. Now there could be other reasons for money turnover other than just people wanting to buy things. If there was rampant inflation, people would want to get rid of their money more quickly, but that is not happening. On the contrary, the public is holding more cash or near cash.

Since the start of the Fed QE operation, the velocity of money has fallen for both M1 and M2 (Figure V). 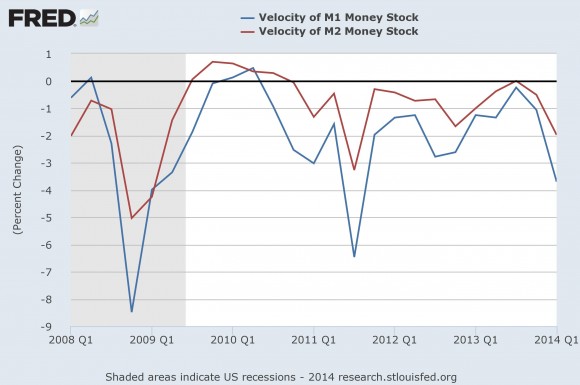 M1 money consists of cash and checking accounts while M2 includes M1 plus savings, small CDs, and money market accounts. As the figure illustrates both M1 and M2 have been in persistent decline. This is not surprising given the tepid economic recovery and other measures that show individuals holding more cash. It is fair to say that QE has done little if anything for general economic activity. Ergo, the removal of QE will do little to change this trend.

QE has done wonders for the debt and stock markets. Though QE did not specifically involve the stock market, the public still feels the Fed Wizards are in control. This is why the stock market always seems to wait with bated breath on the pronouncements of the Fed chairman/chairwoman. In 2008, the Fed saw an ailing market and followed their playbook. The metaphor I used at the beginning of the article was that of a punch bowl – the playbook said brew the punch. That punch bowl has mostly favored Wall St. and punished savers. The Fed Wizards are now taking away the bowl since they feel the party goers need no more. We’ll see how the market feels when that tasty punch is no longer available.

Ed. Note: Eventually the Fed will run out of QE bullets to fire at the economy. And when that happens, there will be hell to pay. It might not happen for several months, or even years. But when it does, you’ll want to be prepared. And signing up for the FREE Daily Reckoning email edition is the first step. In every issue, you’ll get expert insight and analysis from some of the biggest names in finance: including Bill Bonner, Addison Wiggin, Marc Faber, Jim Rickards, and dozens of other giants of the industry. Not only that, but you’ll also see exclusive opportunities to discover real, actionable stock picks that you won’t find anywhere else. So don’t wait. Sign up for FREE, right here, and start learning everything you need to know to safeguard and grow your wealth in any kind of market.

The Financial Road Map for 2018

Economist and best-selling author Nomi Prins reveals a Financial Road Map for 2018. Here’s what to expect with the markets and your money…