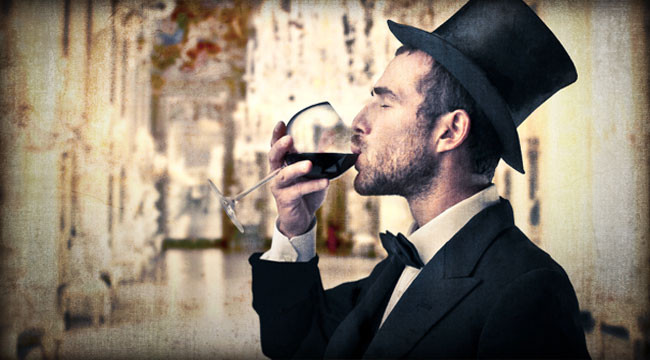 How to Inherit "An Embarrassment of Riches"

Turn on the TV today and you’re likely to hear stories about war, disease, corruption, terrorism, political dysfunction and nuclear proliferation. It’s easy to feel down, even depressed, about the circumstances we live in.

Yet the national media delivers the world through a highly distorted lens, emphasizing the negatives and ignoring or glossing over the many positives. So today let me offer an alternative view, the seldom-told story of your amazing world – and just how much you have to be thankful for…

…we are enjoying the greatest human accomplishment of all time: the near doubling of the average life span over the past hundred years.

Throughout most of human history, physical survival was the overriding problem confronting people. The bulk of each day was spent seeking food, water, shelter, warmth, and safety. Men and women lived lives that were, in Thomas Hobbes’s famous phrase, “solitary, poor, nasty, brutish, and short.”

Nobody worried about retirement because almost no one lived to be old. By 25, just about everyone was dead, usually of unnatural causes. We battled the elements and hunted and scavenged to survive. As a species, we existed on the brink of starvation in a world filled with danger. Even 200 years ago, more than 6,000 years after the advent of agriculture, the vast majority of the world’s population experienced the present standard of living of Bangladesh.

Today we have a great bias, a widely accepted belief in the steady nature of progress. Yet for most of human history, there was none. More has been invented in the past 100 years than the previous 5,000. Most of human history has been one prolonged era of non-progress. Gains in living standards were imperceptible. And the human population grew slowly—or not at all—because death rates often exceeded birth rates.

Things improved with the Industrial Revolution. But people worked much harder then than we do today. In 1850, the average workweek was sixty-four hours. In 1900, it was fifty-three. Today, it is thirty-five hours. On the whole, Americans work less, have more purchasing power, enjoy goods and services in almost unlimited supply, and have much more leisure time.

A century ago, most workers performed backbreaking labor in farming, forestry, construction, or mining. But just a small fraction of the population performs physically demanding work today. That leaves the majority of us free to offer restaurant meals, financial services, jazz concerts, or aromatherapy.

Thanks to advances in medicine and public safety, we are enjoying the greatest human accomplishment of all time: the near doubling of the average life span over the past hundred years. (At the beginning of the twentieth century, the average American lived just 42 years.) Life expectancy in the West is growing by three months per year. That means you’re gaining six hours of life expectancy a day without even exercising.

Living standards today are the highest they have ever been, including for the middle class and for the poor. Yes, the median family net worth suffered a hit following the financial crisis of 2008, falling well below the peak of $126,400 in 2007. But with home prices bouncing back and the stock market more than doubling from its lows, prosperity is on the rise again. The Federal Reserve reported in September that American household net worth had reached a new all-time high of $74.8 trillion.

Appreciating this legacy of wealth doesn’t require blindness to the tragic aspects of life or the suffering of others. Unlike Dr. Pangloss, I don’t believe that everything is for the best in this best of all possible worlds. There are serious problems and depressing or bittersweet aspects in every life, as there always have been for all people at all times and in all places. Yet if you were born into the affluent West, you live in a world that is vastly richer, easier, and more comfortable than your forebears’.

Some things, of course, are getting more expensive in real terms. Health care is one of them. But which would you prefer—today’s more costly, state-of-the-art health care or what you would have received at a lesser cost in, say, 1975? New therapies, vaccines and medical devices are extending our lives. And a recent study from the Centers for Disease Control and Prevention reports that overall rates of new cancer diagnosis have dropped steadily since the mid-1990s. (Yet the American Cancer Society reports that 7 in 10 Americans believe cancer rates are going up.)

The poor are better off, too. The average American living below the poverty line in the U.S. today has a telephone, toilet, television, running water, air conditioning and a car. Go back 150 years and the richest robber barons couldn’t have dreamed of such wealth.

Fifty years ago more than half the world’s population struggled with getting enough daily calories. Yet today the world’s poorest are actually experiencing the most dramatic rise in living standards. According to UNICEF, the global infant mortality rate is the lowest it has ever been, at 51 deaths per 1,000 live births. Child labor, while still too high, is a tenth of what it was five decades ago. The daily calorie intake in the developing world is up dramatically. There are roughly seven billion people in the world, but virtually everywhere health is improving and life expectancy is up.

The overwhelming majority of us are far better fed, sheltered, entertained, and protected against disease than our grandparents. Plus, the majority of our ancestors enjoyed virtually none of the political freedoms we take for granted in the West today: freedom of speech, freedom of assembly, freedom of religion, freedom from conscription, freedom to choose our leaders or to pursue our economic self-interest.

Educational attainment has never been higher. Eighty-eight percent of Americans are high school graduates. Over 57 percent have some college. And 40 percent have a bachelor’s degree. Yes, the cost of higher education has been growing faster than the rate of inflation, but there are signs this is changing, too. Online universities are revolutionizing higher education. And almost two-thirds of colleges now offer full online degree programs, nearly doubled what it was 10 years ago.

All forms of pollution – with the exception of greenhouse gases – are in decline. The world is getting steadily safer, too. Although you wouldn’t know it listening to your local TV station, crime is in a long-term cycle of decline.

This is the most peaceable era in the history of our species. The number of people who have died as a result of war, civil war, and terrorism is down 50 percent this decade from the 1990s. It is down 75 percent from the preceding five decades. And this greater stability has allowed the creation of a single global economic system, in which countries around the world are participating and flourishing.

Our circumstances are not just fortuitous but extraordinary. We should all recognize this and remember it. Human beings have never had it so good. Yet Americans don’t report being any more satisfied today than they did in the 1940s when we were in the fight of our lives against Hitler, Mussolini, and Hirohito.

It’s not uncommon to hear people grumble because they couldn’t get a high-speed Internet connection on the plane, or that Web pages are taking too long to load on their smart phone, or the supermarket is out of their favorite gourmet pet food. As essayist Randall Jarrell observed: “People who live in a Golden Age usually go around complaining how yellow everything looks.”

Most people—even scientists and sociologists—fail to recognize the incredible power of dynamic change. Human beings, technology, and capital markets now operate as a collective problem-solving machine. We tend to underestimate the power of human ingenuity and the enormous incentives that society provides for problem solvers. We focus on the daily white noise of setbacks, problems and negative developments and completely miss the real story.

So be grateful. (Psychologists say it is impossible to feel grateful and unhappy at the same time.) If you want to be wealthier, the first thing to do is adjust your perspective.

You are rich beyond measure, the heir to “An Embarrassment of Riches.” So you have much to be thankful for not just today … but every day.

Alex Green
for The Daily Reckoning

Ed. Note: The bottom line is, there are plenty of opportunities out there, if you know where to look. In every issue of the FREE Daily Reckoning email edition, readers are given no less than 3 opportunities to discover real, actionable investment plays. If you’re not getting it, you’re only getting half the story. Don’t miss out on any more of these great opportunities. Sign up for FREE, right here.

Alexander Green is the Investment Director of The Oxford Club. A Wall Street veteran, he has over 20 years experience as a research analyst, investment advisor, financial writer and portfolio manager. He is also Chairman of Investment U, an Internet-based research and education service with over 300,000 readers. He currently writes and directs the twice-weekly Oxford Portfolio Update e-letter and three short-term trading services: The Momentum Alert, The Insider Alert and The New Frontier Trader. Mr. Green is also the author of The New York Times bestseller The Gone Fishin? Portfolio: Get Wise, Get Wealthy…and Get On with Your Life.