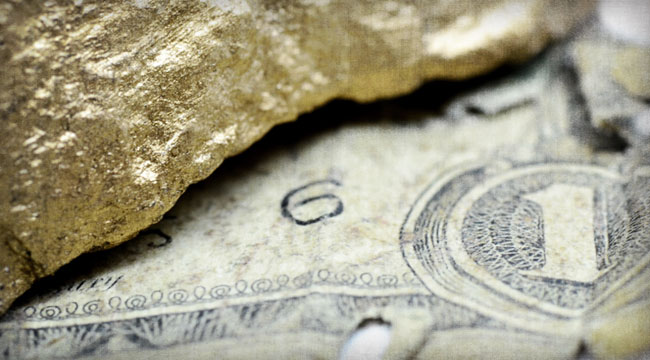 How the U.S. Changed the Nature of Money

The Occupy Wall Street movement and most of academia love to wail about the evils of capitalism. Economist Richard Duncan reckons it’s a bit late for that. About 100 years too late.

Capitalism died a grisly death in 1914 and 1939. What makes Duncan’s take unique is how he sees its replacement.

The hangover when debt stopped growing is now known as the Great Depression.

But first, how did Capitalism fall? It fell when the U.S. entered into the two World Wars. The government intervened heavily in the economy to mobilize and fund the war effort. Like all of the government’s temporary measures, they turned out to be permanent. The U.S. economy never returned to normal. Ever since, war and Capitalism’s replacement seem to be inextricably linked.

Creditism is all about keeping the amount of credit growing, explained Richard Duncan. That’s because credit growth looks a lot like GDP growth, wealth and prosperity. At least while it’s growing fast enough. If you can maintain this growth, the faux economy is surprisingly real.

Under Capitalism, the economic growth was driven by investment and savings. More specifically, savings funded investments which were invested in productive assets. Yes, that is as slow and tedious as it sounds. Today, the economy is driven by credit creation and consumption. Credit comes out of thin air and finances consumption. But that’s a temporary measure at best. And it creates a dangerous amount of instability.

The first experiment with Creditism Duncan covered was the roaring 20s, after the end of the First World War. After the wars, household credit growth took over from the government’s war spending. But the credit boom that gave us the roaring 20s left us with the first type of hangover we’ve seen periodically since. The hangover when debt stopped growing is now known as the Great Depression.

Skipping a few episodes in between, if you compare the experience of the 20s and 30s to today, Duncan pointed out it follows the script nicely:

3. Boom Leads to Bust When the Credit Can’t Be Repaid.

3. Boom Leads to Bust When the Credit Can’t Be Repaid.

There are some key differences too. For example, Duncan argues that this famous quote from Austrian Economist Ludwig von Mises is no longer entirely correct:

“There is no means of avoiding the final collapse of a boom brought about by credit expansion. The alternative is only whether the crisis should come sooner as the result of voluntary abandonment of further credit expansion, or later as a final and total catastrophe of the currency system involved.” – Ludwig von Mises, 1949

Because we now live in a world of fiat currencies, the collapse brought about by credit expansion can be delayed almost indefinitely. Almost.

The problem with delaying the inevitable is that it gets worse when it does happen. When credit growth does slow, the collapse could be severe:

The most interesting part of Duncan’s ideas is that he’s put a number on his predictions. Credit must keep growing at 2% in real terms to prevent collapse in the U.S. economy. That’s about $2.4 trillion adjusted for inflation at 2%.

Where did Duncan get his 2% from? Well, historically, every time credit growth fell below this level, a recession followed.

So who can borrow that much money to keep credit growing? The U.S. government’s deficit is falling. And the private sector isn’t filling the gap sufficiently.

Duncan’s hypothesis is that the government will ramp up fiscal and monetary stimulus at the slightest sign of trouble… indefinitely. There is plenty of room to do both. The world is going through deflation from technology and globalization, and Japan has shown how U.S. debt to GDP could double or more.

So how do you invest? Well, for now you can’t fight Creditism. It could last far too long. But be ready for when it ends.

Ed. Note: Creditism is here. And you have two options. You can stand down, allow this disease to eat away at your wealth and leave you nothing as those politically connected make off like bandits. Or you can take the advice found in Laissez Faire Today and learn how to protect yourself, your family, and your retirement from what’s to come. Sign up for Laissez Faire Today for FREE by clicking here, and learn everything you need to know.

This article was also featured in Laissez Faire Today

“The era of waste, fraud and living on borrowed money is dying…” The good news is that the outlines of a better world are emerging…