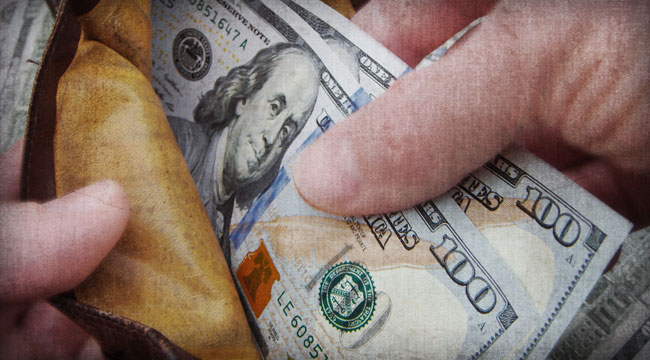 Our colleague and editor of the British magazine MoneyWeek Merryn Somerset-Webb, who lives in Edinburgh, Scotland, recently took issue with our suggestion that small governments are, ceteris paribus, better than big ones:

If Scotland votes for independence it will be as a socialist nation, not a wealthy capitalist one. The result will be profound misery. I really don’t think it is something to wish for. Already a disaster in the making. What small countries actually do these days if they aren’t tax havens full of educated people (Switzerland) is indulge in one variety or the other of nepotism/theft/corruption/public sector crowding out and then collapse.

Merryn is probably right. Big or small, the ruling elite always wants as much misgovernment as the country can afford – and often more!

The idea of modern government, we remind dear readers, is to pretend that the feds work for the citizen. The little guy is led to believe that his enemies will be smitten, that the rich will be robbed so that the stolen loot will be given to him, and that all he holds dear will be protected, enhanced and made obligatory.

That’s why it’s so hard to feel sorry for the guy… even when the feds clean him out.

Meanwhile, our colleague at Diary of a Rogue Economist, Chris Hunter, tells us that the US consumer is no longer deleveraging. Now, he’s borrowing again. Reuters has the story:

US household debt rose in the latest quarter by the most since before the recession, a sign that Americans may be nearing the end of a multi-year belt-tightening trend, data from the Federal Reserve Bank of New York showed on Tuesday.

But we give the American consumer his due: If there is any way for him to get himself into a deeper hole, he’ll get out the spade. The Fed’s low-interest rates are waiting for him. And now that he has a little more equity in his house, he may be inclined to start digging.

But he’s getting older. He tires faster. And he’s seen what happens when he gets himself in over his head. He remembers how uncomfortable it made him feel.

Besides, demography is starting to turn against the “borrow and spend” economy. So, it is not clear that he will continue to borrow at last quarter’s rate.

Age and population – along with debt – have big consequences for stock prices. At today’s levels — based on historical patterns since 1871 — some predict that stocks are going down… for a long, long time.

Demography is just one component. Our analyst tells us that demography alone would account for a negative pull equal to about 5% per year – the largest negative number ever recorded. Which makes sense; never have so many people in the US approached retirement at the same time.

But wait. Does an aging population in the US really matter?

This is a question we have been asking recently.

Deleveraging was the market’s natural reaction to excess debt. QE was the unnatural and monstrous response of the Fed.

“Nearly half of S&P 500 profits come from overseas,” Chris, who also serves as our family office project’s Investment Director, points out. “US demographics shouldn’t have so much effect.”

“But most of those overseas profits come from Europe and Japan,” counters Rob Marstrand, our Chief Investment Strategist. “And their demographics are worse than our own.”

Finally, we decided that the source of S&P 500 profits didn’t matter. The model looks at the effect of demographics on stock prices, not on earnings. Prices today are built upon today’s earnings – which include overseas sales and profits.

The study merely predicts that old people will sell stocks – no matter what their profits – reducing the P/E… and, of course, the prices.

For a nation, as for its capital structure, debt and demography are destiny.

Of course, any model based on history assumes that the future will be more or less like the past. It anticipates that extraordinary things that are happening today will be “normalized” tomorrow.

In the past, when stock prices, GDP, debt and demographics have been similar to today’s, the process of normalization brought stocks down – a lot… and over a long time.

But never in the past did a nation have QE and Janet Yellen.

As we’ve been saying, debt may be the kindly Dr. Jekyll when it is expanding. But it becomes maniacal when it contracts.

Mr. Hyde showed up in 2008, and the party was over. The US went into a debt contraction. We’ve been living with it ever since. Until the last quarter of last year, the private sector was either paying down or defaulting on its debt.

But since 2008, we’ve also lived with ambiguity, split personalities and confusion. As households and businesses deleveraged, Washington leveraged up.

Deleveraging was the market’s natural reaction to excess debt. QE was the unnatural and monstrous response of the Fed. It expanded its balance sheet to reach a staggering $4 trillion, as it tried desperately to keep the EZ credit flowing. From a recent Bank of America Merrill Lynch research report:

The US Fed’s modus operandi worked through asset prices, and animal spirits. This involved getting stock prices up, getting corporate animal spirits up by issuing cheap debt, buying back stock with cash or cheap debt to raise EPS, lowering government borrowing and mortgage costs, and raising consumer net worth/income ratios. Also, asset bubbles were generated in emerging markets, raising their growth labor costs and currencies.

Sharp operators followed the Fed like vultures trailing a sick cow. They borrowed at the Fed’s ultra-low rates… and bought stocks, real estate, contemporary art and emerging market debt. Anything that promised a higher yield than was available in the Treasury market.

QE has been the name of the game since 2008. But QE helped Wall Street, not Main Street. Just look at charts of shipping indexes, real wages or the velocity of money. You see lines that head down in 2008… and don’t come back up.

Eventually, we will almost certainly be right about future stock market performance. But eventually can still be a long way into the future. Which brings us to our updated, revised, and improved outlook. Recall six years ago, we wrote:

“Tokyo, then Buenos Aires,” we said.

The idea was that the US economy would stay in deleveraging mode for “7 to 10 years”… and then, it would be off to the races.

We suspected that the feds would get tired of Tokyo. We figured they’d be ready for some Latin-style action – a little central bank salsa… a bit of monetary mambo.

We predicted that QE wouldn’t work… and that the Fed would want to be more activist – probably by giving up on QE and directly intervening in the money supply (which it is currently constrained from doing; the effects of QE are limited to boosting only the monetary base).

So, what have we learned in the last six years? How has our view changed?

The answer to both questions is “not much.” As we guessed, an aging, deeply indebted, zombie-ridden economy will not improve by adding more debt. Instead, it is doomed to follow Japan down that long, lonesome road of low consumer prices, low growth and high debt.

This road leads to eventual destruction. But when? And how?

In the US, as in Japan, QE does not help stimulate a real recovery. But it does help simulate one.

House prices are up (thanks, in part, to ultra-low mortgage rates). The middle class has more “wealth” (albeit the paper kind) due to gains in their stock market portfolios. The rich are feeling fat and sassy, too.

The Fed can continue modest tapering. But this is likely to produce a selloff in the stock market. Then the Fed will stop tapering. But it will be too late to reverse the damage to equities. They will go down for many years… bringing us even closer to the Japanese model.

Our guess now is that this situation will persist for a few years. As long as the pain is tolerable, the Fed will not be so bold as to abandon QE or take up more daring measures.

Ed. Note: If you would like to learn more about the US economy’s phony foundations, how the whole mess will come crashing down, and what you can do right now to protect yourself, sign up for The Daily Reckoning email edition, right here. In addition to great commentary on the world of finance, the email edition also gives readers a chance to discover real, actionable investment opportunities. So don’t wait. Sign up for The Daily Reckoning, for FREE, right here, and start getting the full story.

This article was originally featured at Diary of a Rogue Economist.