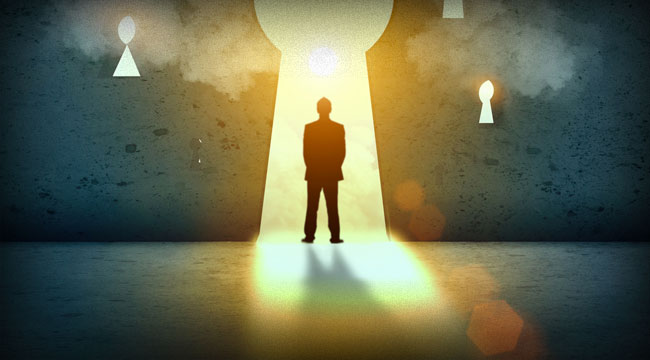 “As long as I live under the capitalistic system, I expect to have my life influenced by the demands of moneyed people. But I will be damned if I propose to be at the beck and call of every itinerant scoundrel who has two cents to invest in a postage stamp. This, sir, is my resignation.”

One of the rarely cited advantages of having money is that you’re less beholden to others who have it too.

The more you have, at least in theory, the more you can ignore the other fellow with it and go about your business. Nor need you drink the same cocktail or rush to the same mall so you can outfit yourself in the same duds.

In short, with a little cash of your own… you can do what you want.

And the fellow who said “Money can’t buy happiness” had apparently not read The New York Times:

“Broadly speaking, the data now indicate that as people get richer, they report getting happier too. Though it’s not quite that simple. Justin Wolfers, an economist at the University of Michigan who helps advise the U.S. government on happiness statistics, told me that poor people in poor countries are not unhappy simply because they don’t have wads of cash. They are more likely to have fewer choices, more children who die in childbirth and other grave problems. And while wealthier nations are generally happier, there is no evidence, Wolfers says, that an artist would be happier if she became a hedge-fund trader.”

But we’re talking capital, not cash flow. The trouble with cash flow is that it doesn’t spring ab ovo, from nowhere. It comes to your hands from the greasy mitts of someone else. If they don’t keep the cash flowing, you may not have any. Unless you’re a government employee or a tenured professor, a job is just a job. You serve at the pleasure of others. If you give them displeasure, they can cut off your income.

Capital is different. If you have enough of it, you don’t have to work for anyone. You can go fishing, pick your teeth, and maintain unpatriotic opinions.

Capital frees you from politics too. According to the most recent numbers, nearly half of U.S. households now rely on other people’s money for some or all of their income. They are beneficiaries of one or more of the feds’ transfer programs. Money is taken from others; it is transferred to them, as if to a getaway car.

The feds even have the chutzpah to give the recipients of this stolen loot an electronic card called the “Independence Card.” Independent is exactly what these people aren’t. Instead, they are like feudal serfs, says Charles Hugh Smith.

“The core of American liberty is widespread private ownership of property,” he writes. If you want to be free, you have to have your hands on the “means of production.” Otherwise, you’ve got to learn to bend.

Imagine that you have zero equity in the house you own, he suggests. How free are you then?

Or imagine that you need to buy a house and need a mortgage. The mortgage market is almost 100% controlled by the feds. How free are you?

He does not mention it, but imagine that you rely on the feds for unemployment compensation, food stamps, health care, or Social Security? Are you a free man? Or a serf?

Smith says we live in a condition of creeping “neofeudalism.” A few people own a lot of property. Most own very little. His attention is focused on housing, where he believes the feds are quietly taking more and more property out of private hands and putting it in the hands of rich, concentrated elites.

He’s probably right about that. But it seems to us that even more neofeudalism is taking place right out in the open… where large groups now depend on the feds… and on Fed’s EZ money… to maintain their current standards of living.

[Ed. Note: The budget, Fed, and interest rates?!? Bill, you set it up so nicely for us!