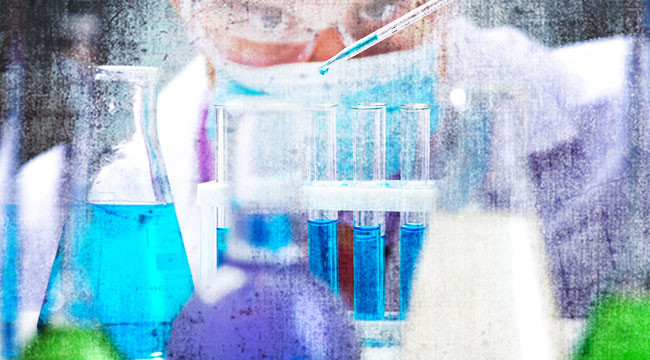 How Medical Innovation Redefines Our World

On a Sunday afternoon swim, a 6-year-old boy was bugging me in a sweet sort of way. He rode up and down the handrail on the stairs in the shallow end of the pool where I was trying to sit in peace. He was laughing and talking, but I couldn’t understand a word through the giggles.

I spoke to him to try to engage him in conversation.

His mother was sitting on the side of pool and said to me, “He can’t hear a word you are saying.”

I thought by that she meant that when he is having fun, he is not interested in adult conversation. So I laughed and tried again. She clarified what she meant: He is completely deaf. Literally, he can’t hear anything.

But then she added something that amazed and surprised me. She said that when he is not swimming, he wears equipment that allows him to hear completely normally. He just has to take off the equipment for the water.

I asked for details, simply because, for whatever reason, I hadn’t really known about this technology. As she explained, the boy’s disability became apparent in the first few weeks of his life. In any other era, he would never have heard a sound. Fortunately, starting in the year 2000, implants became available for children. The ear implants that give him hearing came after about six months. Since then, he has heard nearly as well as everyone else.

My jaw just dropped open. Here is a miracle of our time, a brilliant example of how technological progress isn’t really about machines and efficiency, but about the quality and vibrancy of human life itself.

Deafness has been part of human life as far back as we can look in recorded history. It is mentioned by Aristotle, and Socrates was said to have addressed the issue. It is mentioned in Hebrew law and by the fathers of the Christian religion. It figured into folklore throughout the Middle Ages. Most of what was written and said treated deafness as a curse.

With growing enlightenment as to the nature of disability, we began to see real therapeutic efforts toward helping the deaf. In the 19th century, universities were founded. Languages were codified. Activists worked to have society treat deafness not as a wicked malady, but as a condition that comes with special gifts. A more humanitarian approach replaced age-old bias and even demonization.

Then, suddenly, everything changed. In our own time, vast numbers of deaf people have been given hearing, even from infancy. Technology changed everything. “Cochlear implants” became accessible to vast numbers of people. These small machines are put deep inside the ear to fix what is really just a small physical problem, and they are operated by sophisticated equipment that is barely visible.

It is today entirely possible that a deaf person will never know the fate of millions and millions of people throughout history, that of never hearing a song or the spoken world. The world has been opened up to them through the efforts of scientists and commercial providers over the course of some 50 years. As usual, when the solution arrives, people tend to forget the problem ever existed. That is where we are headed with deafness today.

As alert as I am to the surprises brought to us by market-based experimentation and innovation, learning of this genuinely surprised me. I suppose I had thought deafness was a permanent accident that humanity would always deal with. Before the late 19th century, people probably thought the same about infant mortality and hundreds of diseases that have since been cured. In the Middle Ages, it must have been this way with tooth pain, the pain of childbirth, and the inability to communicate with anyone outside your immediate vicinity.

All human problems seem intractable and perpetual when they are ever-present. But there are always a few among us who do not see problems this way. They see problems as rooted in the lack of some technological solution. And they get to work on a fix. Given time, given resources, given an open market in which to sell their fixes, they change history.

Work on fixing the problem of deafness through cochlear implants began in the 1950s, but no technology works out of the box. It takes learning and trying among many people who attempt marginal improvements, one bit at a time. Work picked up in the 1970s as the prospect of commercial viability of implants inspired more manufacturers to work with doctors and scientists.

As always, it took longer than it should have, but implants for adults were finally approved by the FDA in 1984. It wasn’t until just 13 years ago, however, that the government approved them for use in children as young as 6 months old. Another factor that slowed down development, as always, was the patent, which essentially assigned a monopoly of knowledge to certain individual firms. Even now, the market is hobbled and the devices overly expensive because of them. In other words, without government intervention, we would have seen more progress sooner.

Even so, I was fascinated to see a real-life example of how science and commerce radically changes life itself. How many people would have even imagined such a thing 100 years ago? Very few. Here is a beautiful example of how allowing entrepreneurs to be free of restrictions gives rise to genius solutions to problems most everyone else thinks are permanent.

And there is a still a long way to go. Already, this nice family that I met is looking into getting the next edition of the implants the child is using, because the new version is actually waterproof. He will be able to swim and hear at the same time. There are still other factors that need improvement: battery life, cosmetic appearance, the stability of the machinery itself, etc. And everyone looks forward to the day when the entire apparatus can be implanted with no external operation at all. These times are not far off.

Oh, and by the way, the implants are all manufactured by those kinds of capitalistic institutions everyone loves to hate. There is Cochlear Limited in Australia, Advanced Bionics (in the U.S, but a division of a Swiss company), and Med-El in Austria.

All are for-profit enterprises.

As we think about such things — seeming miracles accomplished through science and market entrepreneurship — what can we say about today’s anti-technology and socialist attitudes among the educated elite? The greens are habituated to be against all industrial progress. The neo-Luddites put down every advance. The socialists tell us that all solutions come from the public sector. Books and articles appear daily that tell us about the evils of technology and how it is ruining human community.

Meanwhile, people sneer at smartphones, gaming, and social media, and speak with trepidation about how Google Glass is going to turn us into cyborgs. The romantics long for a return to the simple life.

But do these people consider the lives of people such as this boy I met? Here is the truth: The return to the simple life means that deafness will not be cured. The simple life means pain, suffering, hunger, disease, malnutrition, early death, and the horror of struggling every day just to live another day. Every bit of the progress humanity has made over the state of nature is due to the unleashing of human creativity in the framework of an open society and an open market. This is the way to unleash the genius of innovative human service.

This is the path of progress. The path of regress is the opposite: command, regulate, control, coerce, and rule by those who imagine that they know what we need and construct a political order to impose it on us. Under such forms of political management, answers to intractable problems do not emerge through the regulatory thicket.

In the end, this is what is most scary about health care solutions like Obamacare. It is not so much how such political solutions misallocate existing resources. The real problem is how such systems lock down and control human creativity and end up preventing us from discovering what we currently do not know. They stop the emergence of seeming miracles such as tools to allow the blind to see, the deaf to hear, and the lame to walk again.

Might we someday truly find a cure for the remaining horrors in our world, such as cancer? It can happen, provided we have systems that are open to experimentation, commercial creativity, and trial and error. I met the living proof of this, a happy boy who will never know a world in which there was no solution for his disability.