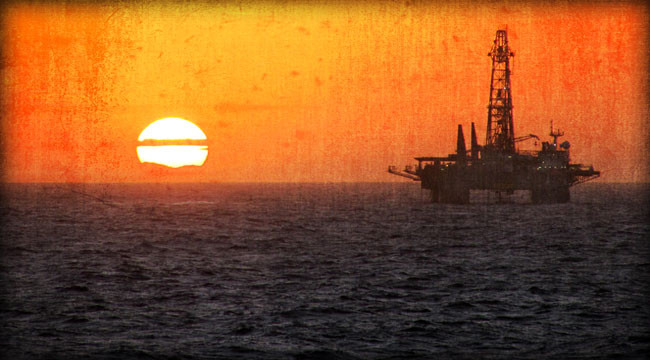 The recent uses for drones are not the first time they’ve been used to monitor oil spills.

In the spring and summer of 2010, during the BP oil well blowout in the Gulf of Mexico (GOM), the U.S. government approved several different kinds of military-operated drones to fly over the water — in very busy airspace — to perform imagery of oil slicks and such.

I know quite a bit about this because I covered the blowout, its effects and the aftermath in an extensive set of articles in my other newsletter Outstanding Investments.

[Ed. Note: From almost the first day of the BP blowout, Byron worked with Joel Achenbach of The Washington Post as the story evolved. He had many discussions with Joel, and explained the astonishing technology behind what was going on. Joel was kind enough to mention Byron in an introductory note in his book about the blowout, A Hole at the Bottom of the Sea: The Race to Kill the BP Oil Gusher. ]

At any rate… back during the BP blowout, I participated in a press conference with Coast Guard Adm. Mary Landry, who was in charge of the U.S. government response. I asked about the use of drones and the success in gathering data versus the risk of airspace management. Adm. Landry was very candid about how much effort went into airspace “deconfliction.” In other words, the U.S. military had Navy E-2C aircraft and Air Force AWACS aircraft flying high overhead to monitor the drone flight paths. The idea was to keep the drones far away from other air traffic flying over the GOM.

Having learned a few things from its near-death experience in the GOM, in late 2012, BP sponsored a drone flight for its own purposes. It was BP’s first foray into operating drones, and the flight lasted all of 20 minutes.

But that short BP flight proved a key point. The drone was an Aeryon Scout UAV guided by an engineer who was not even a licensed pilot. He controlled the drone from a hand-held tablet computer.

Looking ahead, this idea is going places. Drones are relatively inexpensive to purchase and operate compared with larger aircraft. And there’s no need for a human being to risk life and limb flying into extreme environments.

Or consider that if you’re an oil and gas company using drones, you don’t need a dedicated aviation branch on your payroll. You can utilize less-specialized engineering staff to operate drones when needed. Then when the flying is finished, everyone can return to other tasks. Plus, there are smaller ground crews and maintenance personnel required for drones as compared with those required for conventional aircraft. More savings.

Finally, even for jobs that don’t currently involve aircraft at all, like inspecting the outside of an offshore oil rig, drones could be one way to invest in the future. Drones can go to dangerous, hard-to-reach places where companies now assume liability for sending employees directly.

Consider an example such as inspecting hard-to-see nooks and crannies of an oil rig. Send a man topside in a harness to check for rust? Or instead, use a drone with a special camera precisely tuned to detect the wavelengths of light given off by rust or other corrosion? The human operator looks through a camera from a safe, dry location.

Oh, and did you know there are drones for underwater jobs, too? I’ll save that for another day.

Safe to say U.S. oil and gas companies and others have lots of reasons to incorporate former mil-tech UAV platforms into their business. It’ll take time, but we’ll live to see it sooner, rather than later.

The army has been using designs for a decade now, well before we began seeing photos of the Predator drone all around the media a couple of years ago. And while the platform is sound, optics and small electronics have advanced a lot in that time. So now they’ll upgrade.

From where we sit, looking at a year or 18 months or so before the FAA comes up with new rules for drones in U.S. civilian airspace, it’s a good time to think about ways to play this pending opportunity.

Put simply, oil companies look for oil, which doesn’t shoot back. It’s not like hunting terrorists in hostile lands. In most cases, oil companies could do the job just as well the old-fashioned way — with manned aircraft or ships sailing across the wine-dark sea. But then again, manned aircraft and ships are expense elements that drive up the finding cost. And deploying drones to do the work — at least, the routine work — saves money.

If you’re still cautious about investing in UAV technology, you could wait and see how fast the commercial drone market grows after the FAA ruling. There’s nothing wrong with that approach.

But even though we don’t know exactly how the FAA will allow drones to operate in the hands of American businesses, we know they will, and it’s safe to say we’ll be seeing more drones as the years go on. Maybe one day we’ll think no more of it than seeing a conventional airplane in the sky.

Ed. Note: From military to commercial to personal use, the future of drone technology does not seem to be slowing down. In fact, it’s actually ramping up. And a few “in the know” investors could be making some huge gains in the process. Readers of today’s Daily Reckoning email edition had a shot at becoming one of them. If you’re not a member, not to worry. You can sign up for FREE, right here.