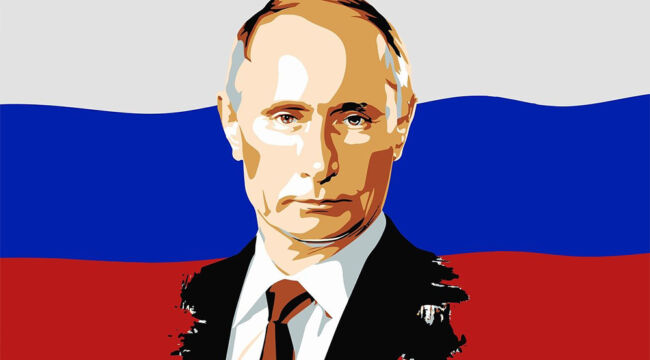 How Bad Is Putin? Ask the Devil

Mainstream Spokesman: Putin’s invasion of Ukraine is a severe breach of international law and a crime against humanity. He is a ruthless thug.

Advocatus Diaboli: It is true — the fellow is a ruthless thug — and plenty more. I can assure you the Boss has space set aside for him once he pays his debt to nature. He has a reservation, so to speak.

Or, for the matter of that, under which international law do American soldiers presently occupy the sovereign nation of Syria?

Russian troops are also there, it is true. But Putin was invited in by the Syrian government. Where was your invitation?

Mainstream Spokesman: That’s ridiculous. These were evil regimes that killed their own people and threatened their neighbors. They were bad guys. We liberate oppressed peoples. We’re the good guys.

Advocatus Diaboli: Let us assume — arguendo — that you are the good guys. And compared with the Saddam Husseins of your world, you certainly are. But it strikes me as rather hypocritical that you cite international law only when it suits you.

I’d rather you simply admit that you are willing to overlook international law when freedom and democracy are on the line. That would at least be more honest.

Mainstream Spokesman: Oh, please. Don’t compare our attempts to spread freedom and democracy to Putin’s brutal invasion of Ukraine. Putin hates democracy, as all dictators do. As the world’s leading democracy, we must support democratic values. The Ukrainians want democracy. They also want to join NATO and the EU. And Russia is one of the most corrupt nations on Earth.

Advocatus Diaboli: I see what you mean. But let me address your points, beginning with the last. It is true, Russia is one of the most corrupt nations on Earth and the most corrupt in Europe.

But do you know which is the second-most corrupt nation in Europe? You guessed it, buster — Ukraine.

And I would remind you that this Ukrainian democracy of yours isn’t especially democratic. Did you know that its President Zelenskyy, now so bravely defying Russian authoritarianism, arrested the leader of his opposition party — and banned three television networks?

Is this your idea of democracy? That strikes me as rather Putin-esque.

Mainstream Spokesman: Don’t get cute with me. You can’t compare Zelenskyy to Putin. The opposition leader was a puppet of Russia and a traitor. What Zelenskyy did was appropriate.

Advocatus Diaboli: I see. So you must subvert democracy in order to defend democracy.

Advocatus Diaboli: You say Putin is Hitler. If he’s allowed to gobble Ukraine, in no time flat he’ll be gobbling all of Europe. Do I have that right?

Advocatus Diaboli: Mmmm. Let me ask you this: Are you willing to fight for Ukrainian democracy?

Mainstream Spokesman: We will do everything we can to help Ukraine defeat the Soviet — sorry, Russian invasion. But we don’t want to intervene militarily because it could start a war with Russia, which could potentially go nuclear.

You wish to bring Ukraine into NATO. But recall Article 5 of the NATO Charter. An attack on one constitutes an attack on all. All members must rush to the defense of the besieged.

That means NATO — the United States, essentially — must defend Ukraine if attacked, presumably by Russia. And then you might have your dreaded nuclear war. Does this make sense?

Mainstream Spokesman: Collective defense is meant to deter aggression. That was the idea behind Woodrow Wilson’s proposed League of Nations. Bringing Ukraine into NATO will deter Russia because they don’t want to risk a larger war with us.

Advocatus Diaboli: There appears to be some logic in your argument. But you are willing to tie your security — and perhaps your very survival — to the decisions of unpredictable people thousands of miles away? You become a sort of prisoner to fortune.

Assume Ukraine joins NATO. What if, in the future, Russia decides its interests are so threatened in Ukraine that it is willing to risk nuclear war?

What if your lovely deterrence fails?

Why should anyone think you can predict future events? Have you thought this through?

Mainstream Spokesman: Yes, absolutely. The world would be a safer place if Ukraine joined NATO.

You know where the path of good intentions leads to, right? Well, old Wilson can personally attest to that. The Boss particularly enjoys pitchforking him in the buttocks. He yelps like you wouldn’t believe. I enjoy watching it, I must admit.

Mainstream Spokesman: The League of Nations was a good idea. It was just that Wilson couldn’t get enough support for it. It might have stopped Hitler, as we must now stop Putin.

Advocatus Diaboli: Have you considered the possibility that your own policies are at least partly responsible for Putin’s actions?

Mainstream Spokesman: Here we go — another Putin apologist. You and Trump should get together.

Advocatus Diaboli: Believe me, we will. But nevermind that. Just hear me out…

Putin has warned for years that Ukraine was his line in the sand. He would not accept Ukraine within NATO, menacing at his doorstep. In reality, no Russian leader would. But you people just kept poking the bear.

Victoria Nuland, some understrapper in your State Department, actually bragged about engineering a coup against Ukraine’s pro-Russian president in 2014 (incidentally, the Boss is keeping a dossier on her for future reference).

To you people, Ukraine is a sort of pet project. To Russia it is a strategic imperative. Now that Putin has pounced, you clutch your pearls. HELLO! He warned you this would happen.

Mainstream Spokesman: Why should we listen to an anti-democratic dictator? Who cares what he wants? We don’t base our foreign policy on what Vladimir Putin wants.

Advocatus Diaboli: Well, maybe you should take his security concerns into consideration. He does, after all, have nuclear weapons — and may be prepared to wield them. Is a democratic, NATO-joined Ukraine more important to you than avoiding nuclear war?

Look at what your Pat Buchanan said over 20 years ago:

By moving NATO onto Russia’s front porch, we have scheduled a 21st-century confrontation.

But it is not just the “isolationist” Pat Buchanan who warned about NATO expansion. Shall I name some?

No, you say? But I insist. Take, for example, Henry Kissinger:

To Russia, Ukraine can never be just a foreign country… Ukraine should not join NATO.

Or a certain Jack F. Matlock Jr. — former United States ambassador to the Soviet Union. This fellow argued that NATO expansion was:

The most profound strategic blunder, [encouraging] a chain of events that could produce the most serious security threat… since the Soviet Union collapsed.

The idea that Ukraine might join a Western military alliance would be quite unacceptable to any Russian leader [and Ukraine’s desire to join NATO] is not protecting Ukraine, it is threatening Ukraine with major war.

If we move NATO forces… toward Russia’s borders […] it’s obviously gonna militarize the situation [and] Russia will not back off, this is existential.

Ukrainian entry into NATO is the brightest of all red lines for [Russia] and I have yet to find anyone who views Ukraine in NATO as anything other than a direct challenge to Russian interests.

Moving so quickly [to expand NATO] was a mistake. […] Trying to bring Georgia and Ukraine into NATO was truly overreaching [and] an especially monumental provocation.

[Pushing] Ukraine into NATO… is stupid on every level… if you want to start a war with Russia, that’s the best way of doing it.

NATO enlargement is utterly misguided and risky. True friends of Ukraine, and of global peace, should be calling for a U.S. and NATO compromise with Russia.

Mainstream Spokesman: Enough! Stop! You’ve made your point, even though I disagree. I stand firm in my resolution that Putin must be stopped and that Ukraine must be allowed to have a democracy.

Advocatus Diaboli: Even if it means war with Russia?

Advocatus Diaboli: Well, it’s been fun. I hate to run, but the Boss is calling for me. I’ll be seeing you.