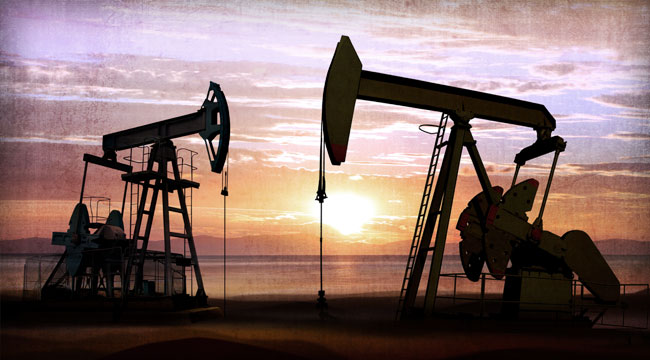 What the Turmoil in Iraq Means for U.S. Investors

It’s all part of a larger story, one that’s been relegated to the back pages of the mainstream coverage, especially with Iraq going up in flames this past week.

Over the past three years, production and export capacity from the once-strong oil exporter have fallen off a cliff. At current rates, Libya is exporting 220,000 barrels of oil per day — that represents a mere fifth of the country’s total export capacity of around 1.2 million barrels per day (mbd). And there’s no real sign of improvement ahead.

Since the Libyan uprising began in 2011, clashes between government forces and rebels have led to a tense situation, at the middle of which are the country’s coveted oil assets.

He who controls the assets wins. Of course, that’s much easier said than done in a country that’s yet to move forward since the ousting of Muammar Gaddafi.

And remember, there’s another outcome that’s slowly baking into the pie. If conflict continues and tempers erupt, there could be an irreversible destruction of the country’s oil infrastructure (in the near term at least).

As the rebels hold the coveted oil export terminals (seen on the map below), there’s a high degree of “rebel risk premium.” 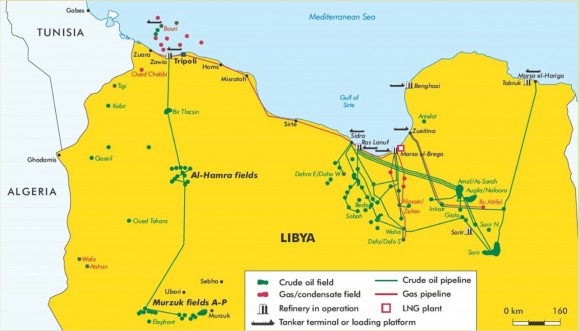 Put simply, if things go bad (and let’s be honest, it looks like we’re headed that way), exports could grind to a complete halt and oil infrastructure could be completely wiped out. It takes only a few rocket-propelled grenades or improvised explosives to wipe out millions of dollars of oil infrastructure — processing plants, loading facilities, pipelines, etc. And those things don’t get built over night.

The outlook isn’t good, and the stakes are high. Indeed, it could take decades to regain production and export capacity. All of which leads to the next point of discussion…

Using the price of oil as a barometer for the conflict, the market looks to be pricing in a long-term conflict and potential total loss of Libyan crude oil. That’s why we’re seeing stubbornly high prices — currently perched at $105.

And it’s not just Libyan oil disruptions that are having an effect on the market. When you add in Iraq, Nigeria and Iran, we’re looking at 3 million barrels per day in “disrupted” oil production. That’s a lot of oil off the world market.

Iraq is another good example. The country was just last year the great hope of the Middle East. Production was set to skyrocket (on its way to 10 million barrels per day), and exports were soon to rival those of Saudi Arabia. However, that storyline has slowed to a near crawl.

Iraq’s oil production is growing. Before word of ISIS came to the U.S. we learned over the past 12 months that its production wouldn’t be a quick ramp-up. I don’t know how long it’s going to take to get from Iraq’s current production of 3.6 mbd to 10 mbd, but it wasn’t coming fast enough to have an effect on oil prices before the country descended into civil war. Now, with ISIS rebels making their way towards Baghdad, it seems even less likely.

There’s a similar story with Iran. Sanctions are still hampering the production growth from the Islamic Republic, but that’s not the only limiting factor. The country needs massive infrastructure and capital investment to keep production heading higher. That said, the current sanctions could be just the beginning of Iran’s economic problems.

And then there’s Nigeria. According to the Financial Times, the country is facing its “worst oil crisis in five years,” with output dropping below the 2 mbd threshold.

Add it all up and the Middle East isn’t the growth story it needs to be. In fact, as time goes past, there’s more reason to believe that struggles in Libya, Iraq, Iran and Nigeria are all but to be expected from here on out.

You probably know where I’m going with this.

Yes. It is a godsend that while havoc slowly rises in the Middle East, the U.S. has seen massive production growth to the tune of some 3 million barrels per day, helping to ameliorate any global oil pinch due to Middle East disruptions.

But I’ll take it a step further.

The major player that we haven’t named is Saudi Arabia.

Right now all’s well with OPEC’s largest producer. Production is varying between 8-10 mbd, and for the most part, this “swing” producer has been able to keep the cash rolling in.

But that begs the question: Could the plague of disruptions reach the shores of Saudi Arabia?

The verdict is still out. But in a world where we’re coming to expect the unexpected, OPEC’s top dog stands alone. And any disruption in that massive oil flow would send prices skyrocketing…well over oil’s recent high-water mark at $147 a barrel.

What does this mean for you?

Well, like we mentioned earlier this week, if Baghdad falls, expect to see the national average gas price hit $4 very quickly. If trouble starts to head south in Iraq, where the major exporting oil fields are, we could be at an average of $4.50. And if any of the firestorm hits Saudi Arabia? We’re over $5…

This would be much to the dismay of oil buyers the world over… and you too if you own a car. But it will be much to the delight of well-run U.S. oil producers and refiners like Valero (NYSE:VLO) and Tesoro (NYSE:TSO). And if you’re a shareholder for a handful of these companies, you’ll be able to go along for the ride.

P.S. Clearly, the U.S. oil boom is doing much more than contributing to the growth of the U.S. economy. It’s also helping to make the U.S. more energy independent, adding a measure of insulation from any current or future oil crisis in the Middle East. And best of all? You can still make a fortune because of it. Sign up for the FREE Daily Reckoning email edition for your chance to discover real, actionable investment opportunities you won’t find anywhere else.