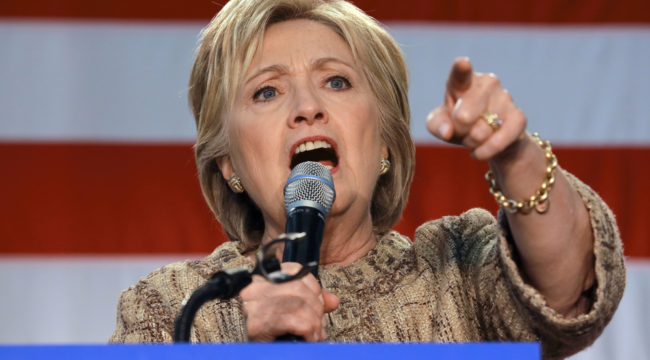 Are you “Ready for Hillary”?

It doesn’t matter. She’s in charge. You, the proletariat, have no choice.

That also means the Democratic primary voters have no choice either. The empty pantsuit always gets what she wants.

Clinton’s cronies made sure she was the winner before the first vote was cast.

And now, thanks to Putin’s Russia via Wikileaks, the old-style Chicago way to “win” an election is on full display as a “dirty politics” case study.

Anatomy of a Scam

Let’s break this down into its component parts…

Throughout the primaries, Bernie Sanders repeatedly accused the DNC of rigging primaries in favor of Clinton.

His campaign knew the process was fictitious, but they lacked hard evidence.

Now the proof has been dropped…

In 19,000+ DNC emails released by Wikileaks late last week, the detailed blueprint of exactly how to steal a nomination is revealed.

Instead of an impartial process where Democratic voters could select the candidate of their choice, DNC officials pretended there was a primary process, selected Clinton because they could, and then made Sanders roll over, look like a fool and finally endorse the Queen.

You have to admire the chutzpah of how Clinton operates.

Play to win, rules be damned.

Here are some of her operative’s “techniques” for eliminating the Sanders’ threat. And yes, this is straight out of “House of Cards”…

Don’t kid yourself. The fix was always in. DNC officials made sure Sanders was eliminated African dictator-style.

Look, occasionally, I’ll get an email telling me that I’m making too much of Clintocracy… or that I’m a conspiracy theorist.

My public response: Are you that naïve?

My private thought: Another brain-dead lemming.

Consider this DNC totalitarian take down of Grandpa Bernie. There’s no explaining away what’s in these emails.

Clinton’s political goon squad subverted the democratic process in a presidential primary to make sure she won.

It’s plain as day to anyone, on the right or left. Let me be even blunter: It’s like O.J. handing over the bloody knife.

But even though the truth’s now out, no one has the power to stop any of this…

DNC chair Debbie Wasserman Schultz resigned this weekend, falling on her sword to great fanfare. And then within hours she was hired as an “honorary chair” to the Clinton campaign.

Wasserman Schultz knows how the game is played. She knows where the bodies are buried and who pays the bills. So Clinton took the next logical step and bought her silence – while the world watched.

That’s a straight up “Sopranos” move. Doing it in your face and with that sickening Clinton cackle.

The bottom line is it’s never been more evident that we have a rigged system that places insane power in the hands of a small, privileged ruling class. We don’t have a functioning republic, let alone a viable democracy.

As since you can now see behind the curtain at the DNC, you know the elites will do whatever it takes to maintain their power and use that power to take down their enemies…

To them, an outright subversion of the Constitution is no matter. Remember when it was just obscene cattle futures windfalls for the Clintons? Oh my, have they grown!

They’ve gotten away with it all for so long they don’t care that you know what they do, how they do it or how rich they get from it.

They know you can’t do a damn thing about it, so they actually have fun rubbing your nose in it and then asking how it smells.

Some may stick their heads in the sand, pretend this twisted reality doesn’t exist and bend over and take it. But I refuse to sacrifice my dignity to join the “kumbaya” crowd.

Changing this mess in the voting booth is a long shot because the Deep State tentacles squeeze from every direction.

You saw how Obama deployed the IRS to eliminate political opposition? Obama was JV. The Clintons are varsity—and you know it.

The only way to stop this rank cronyism is to call it out loudly by name… wherever and whenever it exists.

And frankly, I don’t care if that makes some uncomfortable.

You want to lick the boot? Go for it.

Jim Rickards reveals how cyberattacks may have already compromised our national security, and how they can turn a bad day on Wall Street into a full-blown crash…