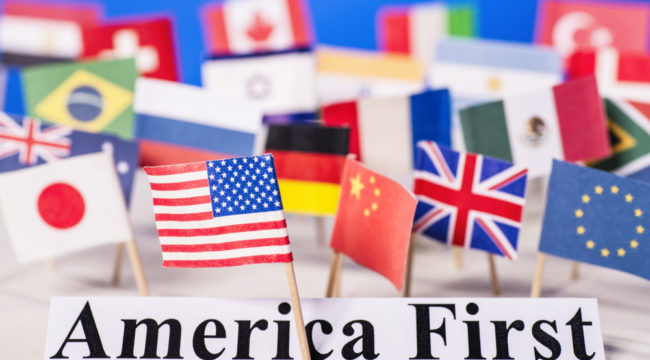 Here’s Why You Shouldn’t Fear a Trade War

Down too was the S&P… and the Nasdaq.

For the explanation, we turn to CNBC:

It is the trade wars — again.

Trade-sensitive stocks such as Boeing and Caterpillar took the heaviest rattling yesterday.

“The focus has been back on tariffs,” confirms Michael Hans, CIO of Clarfeld Financial Advisors.

But in the face of trade upheaval, where can the smart investor find refuge?

Or something else altogether?

We put our agents on the case:

“Go find us an investment that will advantage our readers while trade war hammers the markets!”

Dutifully, they soon reported a beacon of light… an investment class that has soared as trade war fears shake the overall market.

“While the U.S. and China are embroiled in an escalating trade war,” affirms ETF Trends, this investment is “outperforming.”

It is “mostly immune to any external shocks,” says Zacks.

In fact, it tallied an all-time high on Wednesday… while the overall market sank in trade-filled despair.

The asset under discussion is not gold. Or Treasuries.

The answer is… small-cap stocks.

Small-cap stocks are the antidote to trade-war fever.

The Russell 2000 has registered 23 record highs this year… even as the overall market “corrected” 11% in February.

But why are these small fry doing circles around the Dow Jones and the S&P?

The answer begins with the dollar.

We must first look to the stronger dollar…

Large U.S. multinationals earn vast revenues overseas — but they are earning these in weaker currencies.

When they convert these revenues from softer currencies to stronger dollars… the conversion leaves them short.

Their dollar earnings are depressed.

And according to FactSet, S&P 500 companies earn 38% of their income abroad.

On the other hand… S&P Small Cap 600 businesses only generate some 20% from overseas sales.

Thus, much of their earnings arrive in stronger dollars.

“We continue to like small-cap equities because they have a more domestic focus, [and are] less impacted by trade or dollar fluctuations,” explains Angus Sippe, fund manager at Schroders.

And the National Federation of Independent Business reports small-business profits have notched their highest reading since records began in 1973.

This pleasant fact they attribute to the Trump tax cuts.

Small caps are being favored because they’re less exposed to foreign markets, and because they don’t have currency issues, which is becoming a problem for bigger names. Also, they should derive a disproportionate benefit from the tax bill, because the larger firms have big teams that were already working to minimize their tax burdens, so lower rates will mean less for them.

And so we rest our case on behalf of the small-cap stock.

Our default setting is one of detached indifference — we are observers, not drummers.

And detached observers we remain.