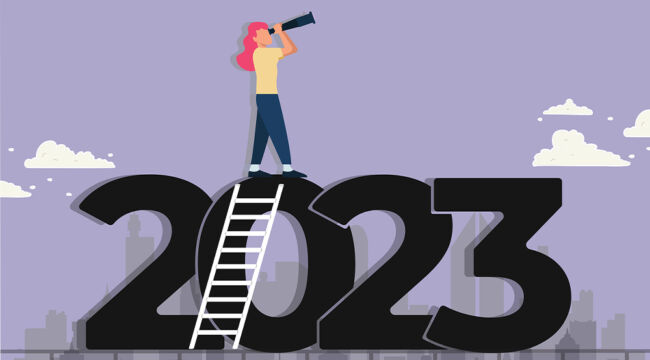 As a financial newsletter, we are duty-bound to hazard our annual market forecast — such as it is.

So today we fetch our crystal ball from storage, blow away the dust… and gaze for images of the year ahead.

How will the economy fare in 2023? Where will the stock market end the year? Gold? Oil? Bitcoin?

Yet before we glimpse how markets will end 2023, let us observe how they ended 2022…

The Dow Jones Industrial Average shed 8.7% on the year — a barren field. But the Dow Jones sprouted a bumper crop against the other main indexes.

Not All Is Lost

Yet among the barren soil and the choking weeds some meager flowers emerged.

And so the man who clung exclusively to oil and gold reaped a relative jackpot in 2022.

Yet we will glance backward no more. Let us instead look forward into the year beyond. What can you expect for 2023?

For now we limit our crystal-gazing to Wall Street and the stock market.

“So goes January, so goes the year.”

Does this Wall Street lore have anything in it?

The Stock Trader’s Almanac — a sort of Old Farmer’s Almanac for the stock market — argues yes.

Its producers have thumbed through the stock market’s diary entries since the year 1900. This drudge work reveals this curious and relevant fact:

Yet 75% represents what the numbers men term “statistical significance.” And plenty of it.

It is but five days into January and therefore far too soon to pull conclusions. Yet early indications are not entirely auspicious.

The Dow Jones has shed some 300 points since Jan. 3rd’s opening whistle. Both S&P and Nasdaq have endured parallel losses on a percentage basis.

Yet for emphasis: January is youthful and the stock market may end the month very deeply in clover.

We merely note its early doings.

Yet here is one ill omen for the stock market: positive economic news, this morning released…

That is, positive news for Main Street is negative news for Wall Street. We have observed the phenomenon several times these past several years, and remarked about it.

The entire business wars against the natural intuition.

Yet today’s stock market runs to very strange and perverse settings. Positive economic showings leave Wall Street wringing its hands in dreadful worry… as Yahoo Finance reports… and for the reason it cites.

Positive economic showings blast a powerful signal that the Federal Reserve will stick to the warpath and continue raising interest rates.

Yet Wall Street takes it quite heavily. That is why your editor takes any notice of it whatsoever.

How much more positive economic news the stock market can absorb… real or imagined… we do not know.

Yet we hazard it may go to pieces in the face of additional economic joy.

But wait, what is this we learn? We have shoveled up news disturbing for Main Street — thus salivating news for Wall Street.

That is, the rate of money supply growth did not merely slacken. It went into actual contraction — again, for the first occasion in 33 years.

And that is a poor economic augur, a worrying straw swaying in the wind. Ryan McMaken of the libertarian Mises Institute:

Money supply growth fell again in November, and this time it turned negative for the first time in 33 years. November’s drop continues a steep downward trend from the unprecedented highs experienced during much of the past two years…

Once again, and to emphasize: Not only has money supply growth diminished — it has slipped into actual reverse. More:

That is generally a red flag for economic growth and employment. It also serves as just one more indicator that the so-called “soft landing” promised by the Federal Reserve is unlikely to ever be a reality.

We are compelled to agree. Any “soft landing” promised by the Federal Reserve is unlikely to ever be a reality.

The foregoing constitutes reliable evidence — in our estimation at least — that the United States economy is careening toward recession.

We estimate further that the gathering recession will settle in during 2023’s first quarter.

Thus we satisfy one of our predictions for the year. The economy will enter recession at one point during the first quarter — the second quarter at the very latest.

Wall Street Gets Its Pivot

Even the Federal Reserve will be unable to miss the recessionary realities. It will then take to the straightabout… and reverse course. It will begin lowering interest rates — and at a clip.

This we forecast for May, no later than June.

Wall Street will finally have its desperately desired “pivot.” That in turn brings us to our second 2023 prediction:

The stock market will recover its bounce this year — even if perhaps January ends in red.

Finally — though unrelated — the United States House of Representatives will elect a speaker sometime before midnight strikes on Dec. 31.

Yet it may be a near run thing.

Thus concludes our crystal-gazing for this year. We advise you to invest accordingly.

Our advice is free of course. And as you know, a man gets what he pays for in life…