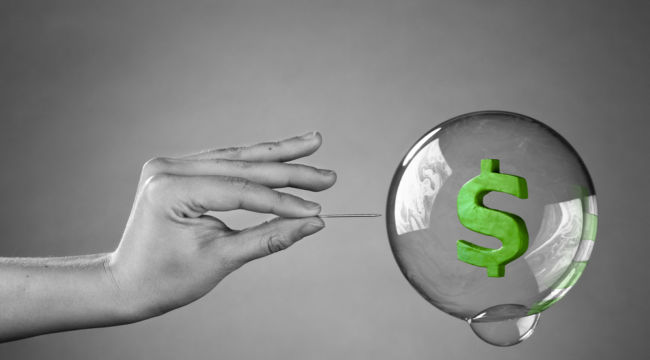 Here’s What Could Deflate the Bubble

Many investors think that nothing can stop today’s stock market bubble.

Today’s bulls rest easy with the notion that central banks “have their back.” Central bankers have promised not to raise interest rates for years, so there’s no perceived threat of tighter financial conditions.

Euphoria in last year’s market exceeded that of the dot com mania. Most expect that good times will continue in 2021.

However, they shouldn’t rest easy. Many trends – including the rapidly shrinking risk appetite of the wealthiest cohort of retired Baby Boomer investors – suggest that we will see lower demand to hold the riskiest stocks in the years ahead. Yet, most people are acting as though demand for the riskiest stocks will remain at 2020 levels for years to come.

Right now, a slow-moving threat to the bubble environment is emerging: an influx of new stock shares. As long as demand for stocks trading at ludicrous valuations remains high, more and more supply of stocks will hit the market. How is that a threat to the bubble?

A rapidly growing supply of new shares can impact pricing for the entire market (even companies that are shrinking supply through stock buybacks). If enough supply of new shares arrives, it can put downward pressure on the prices of existing shares. Think of it as depressurizing a bubble slowly, rather than popping it quickly.

The mainstream financial press often mentions the image of “cash on the sidelines.” Here’s why this image is misleading:

At any given point, every security that has been issued – whether it’s a stock, bond, option, or ETF – must be held by someone until it is retired. Stocks and bonds can be retired in mergers, acquisitions, buybacks, refinancings, tender offers, or bankruptcies. Options must be held by someone and can be actively traded until they are exercised or expire and become worthless.

Since every security that exists in the market must be held by someone, there is no “cash on the sidelines” in the aggregate. If money market fund balances rise (which appear to be a rising tide of “cash on the sidelines”), they do so because corporations and governments chose to issue more short-term debt, and some entity was willing to buy it.

If one’s assets are 100% in stocks, one might perceive that other people who currently hold cash are on the sidelines. This perception has a bullish, hopeful slant. It presupposes that it’s only a matter of time before the folks holding cash will enter the market and buy stocks (maybe your stocks) with their cash.

Yet, if these potential buyers enter the market, they will simply exchange their cash for shares when the trade settles. The seller of the stock will then hold the cash that the previous cash holder had in his account. Before a trade, one person held cash, the other shares. After a trade, they switch holdings.

So the “cash on the sidelines” mantra can be very misleading. And there’s no guarantee that cash will come “off” the sidelines into stocks. If it doesn’t buy up the new supply of stock, the price of the stock should come down.

If an imagined future wall of cash does not necessarily determine pricing changes in the stock market, what does?

The eagerness of buyers and sellers to transact is the key factor. If buyers are very eager to own the shares that are offered in the market, then they’ll bid up the price. If sellers are eager enough to dump their shares, they may accept a bid far below the last quoted price.

My key point is that the relentless supply of new securities (stocks, corporate bonds and more) could ultimately be the pin that pricks today’s bubble. Or if it fails to prick the bubble, the new supply of shares will, at least, depressurize the bubble.

There is one more thing to consider. It could cause the new supply of stocks and corporate bonds to be bountiful in the future…

Thanks to repeated interventions and bailouts, the global economy has become steadily less efficient at allocating capital to its best uses. Instead, capital gets trapped in companies that should have gone bankrupt long ago and in capital goods that will ultimately deliver a deeply negative return.

For example, there was overbuilding of fiber optic communication lines in the last dot com mania. A parallel today could be online fulfillment centers or electric vehicle factories.

Few investors are imagining a future in which the most popular stocks and companies have vastly overestimated demand for their products and underestimated competitive supply. But history shows that these mistakes happen all the time. It’s an open question whether public market demand will remain strong enough to absorb all the supply at high prices.

The critical difference between historical examples and today is that the astonishing flood of capital, plus easy corporate bond and stock financing conditions along with aggressive central banks and governments, suggests that the reckoning for the most popular stocks will be big.

Maybe investor demand for speculative stocks will remain high or even intensify in 2021. However, data and history both suggest that demand rarely gets more intense than it was in 2020.

Unlike reasonably valued stocks, which are priced in fairly close relation to the free cash flow that they can deliver to shareholders, bubble stocks are driven by faith in narratives about the future.

When narratives break down, and money flows reverse, there’s no support from the underlying businesses to cushion the fall until prices crash 80%, 90% or more.

Many companies, both large and small, are venturing far from their core specialties to participate in bubble activities. This phenomenon happens in any financial system which penalizes saving and promotes speculation.

Here is an example, which reflects how extreme risk-taking is spreading from day traders to corporate boardrooms…

In the U.S., just a few years out from the last Bitcoin bubble burst, we see corporate treasurers speculating on Bitcoin with scarce shareholder capital.

Bitcoin has a devoted following. But Bitcoin’s key weakness is that if the monetary and fiscal authorities ultimately decide it’s a threat, they could crush it. Is it wise to speculate on Bitcoin with scarce capital that could otherwise strengthen its business? What if Bitcoin crashes?

Bitcoin proponents reply that such action would drive usage to more hospitable jurisdictions that are more forward-looking. However, if U.S. authorities penalize or block the connections between Bitcoin and the dollar-based payments system, it would significantly reduce demand to hold this popular cryptocurrency, which would crash its price.

And the higher the Bitcoin price rises, the larger the threat it poses to the dollar-based payment system.

Gold is a different case; not only because it has been a universally recognized store of value for thousands of years, but also because gold is a bedrock reserve asset of the world’s major central banks.

In a worst-case scenario collapse in confidence in fiat currencies, central banks can try to rebuild confidence by re-pegging their currencies to the gold that they hold in reserve.

However, gold standards are unlikely to be attempted in the near future, because central banks and governments wouldn’t want to preemptively handcuff their flexibility to print and spend unless confidence in their paper money and their bonds collapses.

Gold prices in the private market would need to first rise substantially as confidence in currencies falls, and then paper would be re-pegged to gold.

It’s very difficult to imagine Bitcoin taking the place of gold in this scenario. Gold is a form of insurance that’s stood the test of time.