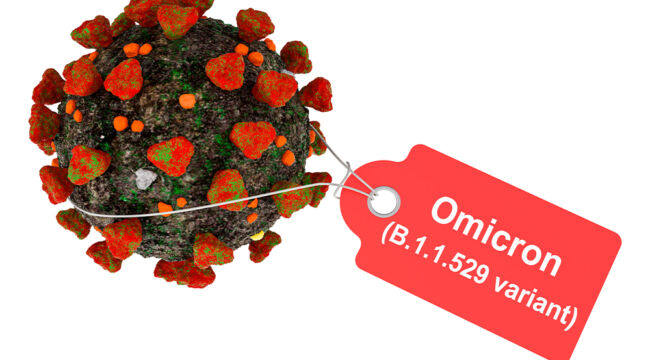 It was the worst Black Friday performance in history.

Usually stocks rally on news of shoppers breaking down doors to buy bargains. The reason for the decline was reported to be new fears of the COVID pandemic in the form of the so-called omicron variant.

With exponential spread, the total caseload will overwhelm public health systems in a matter of weeks.

How long will a surge of cases last? And what should be the public response to the new variant?

Here are a few tips to guide you through this variant outbreak: It will get worse but will fade by early February. That’s been a consistent outbreak pattern (about ten weeks start to finish) since the pandemic began.

Masks and lockdowns won’t help; they never do. But they will be imposed anyway by clueless politicians, so get ready for the economy to slow down again.

Vaccines won’t help (same with boosters). The vaccines appear to reduce symptoms and fatalities, but they don’t stop the spread. You can still become infected and spread the disease even if you’re fully vaccinated.

So don’t buy the official propaganda you’ll be hearing in the coming days and weeks.

What You Should Do

The best approach is still to get outside without a mask, get fresh air, exercise and wash your hands. And in case you get sick, there are effective therapeutics you can take to stop the virus from progressing (hydroxychloroquine and ivermectin are just a couple).

The key is to start getting treatment early. Unfortunately, the CDC has told people to wait around until they have trouble breathing before going to the hospital for treatment.

But by that point the virus is already deeply entrenched and much of the damage is done. Treatment becomes very difficult at that point.

That’s why early treatment is essential, despite what the public health authorities urge. It prevents the virus from replicating beyond control.

Other than that, we just have to wait this out. Politicians only make things worse.

The fact that the variants keep coming (the Italian Strain, Delta, now Omicron), is a sign that the original virus was bioengineered in the Wuhan laboratory.

That’s because a natural virus mutates, but it becomes weaker over time. But this virus shows a remarkable ability to mutate around antibodies and other defenses.

The World Health Organization (WHO) skipped Nu (N) because of potential confusion with the word “new.” They also skipped Xi in order not to embarrass Chairman Xi of the Communist Party of China.

The next letter is O, called omicron and that’s the one they selected. In case you were wondering whether the WHO kowtows to Communist China, there’s your answer.

Regardless, bureaucrats and the politicians who listen to them are going to resort to the only tricks they know. Expect more lockdowns and other futile, counterproductive measures that have been proven to fail.

Add the new virus variant to an economy that’s already slowing down due to supply chain disruptions and labor shortages, and we could be heading into recession very soon.

This reality will catch up to the stock market. It’s time to lighten up your equity exposure and allocate more to cash and hard assets like gold.

Here’s another reason you should acquire hard assets like gold: Inflation.

The Highest Inflation in 30 Years

Since the COVID crash of March 2020, the Fed has printed over $5 trillion in base money (called M0).

The Trump and Biden handouts and other programs in 2020-2021 have added $6 trillion to the deficit over and above the baseline. Another $2 trillion in deficits will be on the way soon with Nancy Pelosi’s legacy entitlement bill now pending action by the Senate.

We’re now seeing the highest consumer inflation in over thirty years. The price of everything from gas at the pump to meat and milk in the grocery store is soaring.

Inflation has many causes. Both the money printing certainly contributes to it. The greatest danger is when inflation expectations rise and consumer behavior causes inflation to feed on itself in the form of bringing demand forward and hoarding goods.

That’s not a particularly rosy scenario for the U.S. economy. Then, why is the U.S. dollar so strong?

How do we reconcile U.S. economic vulnerability with the demonstrated strength of the U.S. dollar?

The answer to the strong dollar conundrum is to look for another measuring rod.

It’s true the U.S. dollar is strong against the euro, yen and Swiss franc. Yet, those are all paper currencies and none of them is backed by gold.

When you compare one paper currency to another, it tells you something about paper money capital flows, but it tells you little about the value of currencies measured in hard assets such as land, gold, silver, oil or other natural resources.

That’s where gold comes in. It is a form of money although central bankers won’t acknowledge it.

Central banks collectively hold 35,554 metric tonnes of gold or 20% of all of the above ground gold in the entire world.

The answer is obvious – gold is money. Central banks simply won’t admit it.

Yet, gold is a different kind of money. Gold is not paper money and cannot be issued in unlimited quantities. Paper money is a liability of the banks that issue it. (Just read a twenty-dollar bill next time you have nothing to do. It says “Federal Reserve Note” right on the front. A note is a liability).

Gold is an asset, but it’s not anyone’s liability. That’s what makes it different.

For this reason, gold is the best way to measure the value of any currency. It gives an objective measure by weight. You’re not comparing one fiat currency to another. You’re comparing a fiat currency to real money. That’s how you know if the fiat is strong or weak.

When we use this measure, we see that the U.S. dollar is not actually getting stronger; it’s getting weaker.

There’s a one word explanation for this phenomenon — inflation.

Currencies may fluctuate freely against each other, but they all fall in real terms when inflation is taken into account. Gold is the yardstick that is most immune to inflation. That means it’s the best way to measure currencies in an inflationary environment.

We may be in an age of King Dollar, but the king is about to lose his golden crown.