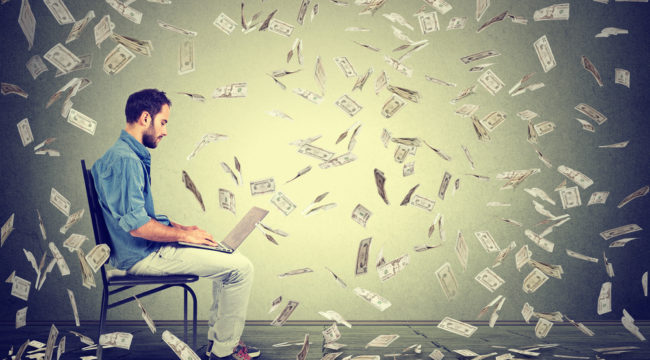 But exactly what is helicopter money and what connection does it have to stock valuations, if any?

Broadly speaking, helicopter money is government deficit spending that is directed to households rather than the financial sector. Deficit means the government doesn’t have extra cash to pay for the stimulus program — it borrows it by selling government bonds.

Typically, bonds that mature (i.e. the principal must be returned to the owner of the bond) are replaced with newly issued bonds. In other words, government debt never declines, as new debt is issued to replace bonds that come due and to fund additional spending.

The nearest household analogy is a mortgage which you “pay off” by borrowing an even larger sum every few years. The debt just keeps getting larger as time goes on. The assumption here is that there will be more of everything in the future: more taxpayers paying more taxes, more consumers consuming more, more workers being even more productive, more corporations earning even more profits, and so on: more, more, more, more.

More of everything means it will be easier to pay the debt we borrowed from future taxpayers. The economy will be larger, tax receipts will be higher and productivity will drive profits and consumption higher. This assumption worked for a few hundred years, but now it doesn’t. In Japan (and many other nations are soon to tread the same path), population is declining and GDP, profits, productivity and tax receipts are all stagnating.

This raises the terrifying prospect that there won’t be more of everything in the future. If there is less of everything, sacrifices must be made to roll over the mountain of debt accumulated in the past, and it soon becomes impossible to do so.

Here’s the magic part of helicopter money: to avoid all the problems of ever-rising debt in a stagnating economy, the central bank creates money out of thin air and buys the government bonds with the newly created money.

This is called monetizing the debt as new money is created out of thin to buy the debt. No tax revenues are needed, and so no sacrifices must be made to accumulate more debt. All the helicopter money is in effect free money because nobody has to pay anything for it.

Monetizing helicopter money is like a perpetual motion machine: it’s a magical machine for creating free money the government can spend any way it likes.

From 2008 to 2016, government and central bank stimulus policies were aimed at restoring the financial sector. Quantitative easing (QE) boosted stocks because QE flooded the financial realm with free money for financiers and corporations.

Households did not get any direct benefit from QE. Households didn’t get to borrow unlimited sums at 0.5% interest, and we didn’t get a check from the Federal Reserve or the Treasury.

Now that it’s widely recognized that QE just made the rich richer and did essentially nothing for Main Street, central banks and governments are rushing to launch helicopter money programs that funnel money directly to Main Street and households.

Helicopter money can take a variety of forms. Everybody’s favorite spending programs on infrastructure (a.k.a. bridges to nowhere in many cases), push money into construction materials and labor.

Student loan deferments and forgiveness programs don’t put money into students’ pockets, but they do put the money the students would have paid in student loans back in their pockets.

Tax credits and rebates put money that households paid in taxes back into their pockets.

The assumption here is that helicopter money will trigger a virtuous cycle of growth in stagnating economies: once this tide of new money washes over the economy, people will spend, spend, spend, entrepreneurs will start new business, corporations will expand production and this new expansion of activity will enable the state/central bank to withdraw the helicopter money.

The problem with helicopter money is what I call the Ghost City Syndrome: helicopter money floods into a barren landscape and constructs a new city from scratch. The idea here is that the new city will magically attract residents, entrepreneurs, etc.

Boosting government spending via helicopter money will not boost corporate profits or household borrowing beyond brief spikes in specific industries. Spending helicopter money on bridges will boost profits for construction materials companies, but only as long as the helicopter money is flowing.

As for boosting household borrowing and spending: what does a desperate policy like helicopter money say about the economy and our leadership? It tells us things are bad and likely to get worse. So the only rational response is to save more, not less, especially since savings earn nothing in a zero-interest rate environment.

In effect, helicopter money feeds the perverse incentives that have crippled our economy and society. Rather than be forced to choose priorities and rid centralized systems of wasteful corruption, bloat and graft that siphon off wealth and destroy productivity, helicopter money enables the continuation of all the inefficient, corrupt, bloated and unsustainable systems that make up the status quo.

Things look busy and productive until the day the helicopter money runs out. From that day on, everything crashes back to reality and tumbleweeds are soon blowing down empty streets.