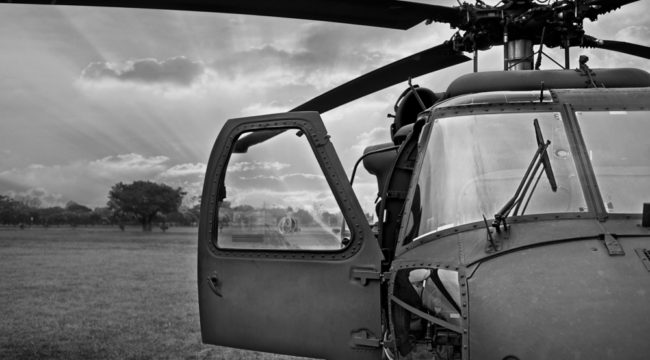 Get ready for the first drop of “helicopter money”…

Details are vague. Rumors, innuendo swirl. But speculation is that he met with BoJ Gov. Haruhiko Kuroda and Prime Minister Shinzō Abe. Reuters was unable to confirm the meeting. But Bloomberg says “a person familiar with the matter” confirmed it did, in fact, occur.

The alleged purpose for the meeting? To crank up the choppers — it’s time (again) for the Japanese government to spend, spend, spend. With (more) borrowed money.

Yes, it’s time for even madder music… and even stronger wine. It comes none too soon…

The Japanese economy is a shambles. It’s contracted in five of the past 10 quarters. The yen’s already up 20% this year, killing exports and tilting the economy further toward a menacing deflation. Enter helicopter money. It combines open monetary spigots with a blank government check to keep the deflation bugaboo at bay.

Analyst Sean Derby penned a report called Japan: An Equity Investor’s Guide to Helicopter Money to explain it. From which:

Deflation in the extreme cases epitomizes falling prices, declining wages and a lack of demand. In order to overcome this “nightmare” scenario, an expansionist policy would need to combine both fiscal and monetary policy. The important distinction of helicopter money compared with QE or conventional deficit financing is that it is a combination of extreme monetary easing and fiscal relaxation.

What’s a little more debt when your debt-to-GDP ratio is already 250%, the highest in the world?

Ben’s appearance in Japan today makes perfect sense. Prime Minister Abe’s ruling party just won an important election yesterday. So he has renewed political capital to launch another boondoggle. With that fresh wind in his sails, and a vandal’s disregard for his nation’s currency, Abe pledged to begin a fresh, 10 trillion yen round of “fiscal stimulus.”

Bloomberg says Abe’s fiscal stimulus plan includes more infrastructure spending, such as the additional construction of high-speed trains. Will it work? Jim Rickards wonders: “In Japan, the infrastructure is so good it’s hard to imagine they can spend any more.” But spend they will.

And if there’s one thing this welfare-dependent market likes, it’s the promise of fresh stimulus…

And like Pavlov’s dogs, the Nikkei spiked 4% this morning on the news. That’s its biggest gain in almost five months. “These expectations are spurring a surge in stocks and selling of the yen,” explains Yuji Saito, a Tokyo-based foreign-exchange analyst.

Hiroaki Hiwada, a Tokyo-based strategist, confirms the reason for today’s action: “With hopes that stimulus will come earlier than expected, investors are seeing it as an opportunity to buy.”

And here’s the smoking gun proving Bernanke’s role in today’s surge. The Washington Post quotes Hiwada: “The report on Bernanke’s visit ‘makes it natural for speculation to emerge on additional easing.’”

But a thought occurs: Is Japan’s looming venture into helicopter money a taste of what’s to come? ZeroHedge steals our thunder:

Japan… has given the world a glimpse of not only how “helicopter money” will look, but also the market’s enthusiastic response, which needless to say, is music to the ears of central bankers everywhere.

So well done, Blackhawk Ben: While you never managed to unleash helicopter money in the U.S., you finally succeeded in bringing it to Japan, which will now be a trial balloon for the rest of the world: If it works, expect many more instances of “extreme monetary easing coupled with fiscal relaxation” around the globe.

And that’s how the central banks get their inflation. At long last. But here’s another question: Once the genie’s out of the bottle, will they be able to cram it back in?

If you think gold’s expensive now…