The Health Care Version of “Too Big to Fail”

During a frenzied Friday afternoon, on March 25, House Speaker Paul Ryan trudged over to the White House, head bowed in apparent humility. He was there to tell the big boss that they weren’t going to get the 216 votes needed to pass the legislation that would “repeal and replace” Obamacare.

The GOP bill wouldn’t pass even though they controlled the House.

It was obvious the House Democrats weren’t going to let any part of Obamacare go (despite its many flaws). What was less apparent before March 25 was the extent to which sub-factions within the Republican Party felt the same way, although for different reasons.

The more conservative House Freedom Caucus (with about 30 members) thought that the proposed American Health Care Act, dubbed “Ryancare,” was Obamacare-lite. If it had passed, health insurance companies would have received an estimated windfall of $1 billion or more.

But it didn’t extinguish the biggest thorn of Obamacare for the Freedom Caucus: required participation. The plan would still have banned discrimination against individuals with pre-existing health conditions, as a concession to voters.

The Tuesday Group of Republicans (50 moderate GOP House representatives) were also worried about the loss of coverage to their constituents. And the quickly drafted piece of legislation did not address loss of coverage.

Perhaps because the Tuesday Group is larger, Trump chastised only the Freedom Caucus along with the Democrats in a tweet and left the Tuesday group alone. But that action doesn’t mend GOP fences for fast passage of a future Republican healthcare bill.

Health insurance companies kept quiet during this run-up to Ryan’s worst day at the office. That’s because they are fans of Obamacare. Since it was signed into law on March 23, 2010, the stock prices of the big five insurers (UnitedHealth Group, Anthem, Aetna, Cigna, and Humana) have soared.

It would be wise to expect the health industry to continue to strengthen, and for some to play this trend profit over the next year.

Health Care’s Version of “Too Big to Fail”

First, it’s important to remember that before Obamacare passed, the health insurance industry was already formidable. As Dr. Paul Song mentioned in an interview, before Obamacare “there were 3,300 registered health care lobbyists for the 535 members of Congress, and more was spent in the run-up to the Affordable Care Act (Obamacare) than what was spent on the Bush-Kerry election.”

While the health industry wasn’t hurting before, it has flourished under Obamacare. The total amount of health related expenditures by the government, businesses and households combined, reached $3.2 trillion in 2015. That was a 5.5 percent increase over the prior year. These industry expenses accounted for a whopping 17.8% of U.S GDP.

It’s not just insurance companies that account for increased spending in the health care sector. Below is a chart that shows the increase in hospital care, professional care, long-term care, and more. 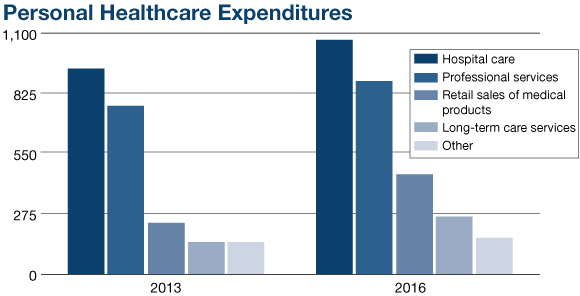 Judging from the sector’s 2016 profits, it’s likely another increase is coming. The increase is largely because of expanded health coverage under the ACA and greater use of all health care services, the journal Health Affairs noted. In 2013, 86% of the population was insured. By 2015, that number reached nearly 91%.

That’s how insurance companies have reaped record-breaking profits. Obamacare delivered them more customers and they charged customers — whether they had kept their old plans or elected to be covered under Obamacare — higher premiums.

The big health insurance companies haven’t used the extra premium money from their new subscribers to reduce other premiums or enhance coverage. They did things like purchase $30 billion worth of their own shares to inflate their stock options and executive bonuses.

The Institute for Policy Studies calculated that in 2014, the 10 biggest insurance companies paid their top executives a total of $300 million more than the prior year. United Healthcare CEO Stephen Hemsley pocketed $66 million in 2014. In 2016, Humana CEO Bruce Broussard’s compensation hit $19.7 million, nearly double his 2015 $10.3 million take. (One wonders what exactly these CEOs are doing to help people get well.)

They also used the combination of more premium funds and self-inflated higher stock prices to engage in a slew of mergers that further concentrated their control of the sector, allowing them the privilege of continuing along this path under Obamacare.

Even if there is a new health bill coming from the Democrats or the Republicans to alter Obamacare, and even if the biggest mergers are halted due to anti-trust laws (as they have been), the big five insurance companies are starting in a position of power.

The big five and the firms with which they most engage on the administered health care (as opposed to just health insurance) will have a lot of leeway to push through advantageous policy, just as they did with Obamacare.

In the wake of the bi-partisan Obamacare repeal “hiccup”, health insurance companies don’t have to worry — for now — about losing premium paying customers. As the insurance industry tries to leverage whatever bill the Republicans put forth in the next round of the health insurance, the status quo will remain.