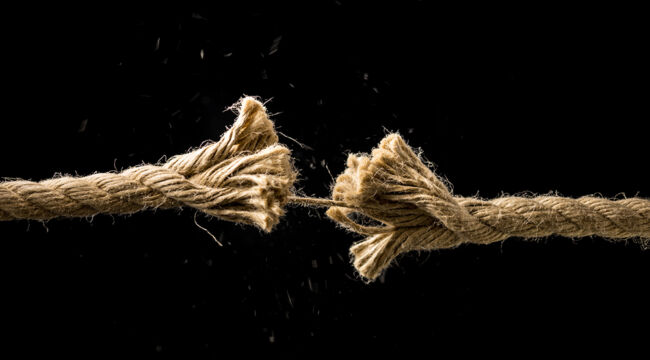 Hanging on by a Thread

Of course, we still have three weeks left in the quarter, and we won’t know the actual first-quarter figure until the end of March, but the Atlanta Fed’s GDPNow estimate has a good track record, and it uses real-time data rather than model-based estimates.

TV talking heads will brag about how real incomes have gone up, according to the latest employment report from the Bureau of Labor Statistics.

The most recent employment report showed weekly earnings rose to $1,096 from $1,092 the month before and the year-over-year change in average hourly earnings last month was 5.1%.

Great news, right? That sounds healthy, but it’s important to know that those numbers are nominal and not real.

Not so healthy after you factor in inflation. Talking heads may not know the difference between nominal and real gains, but everyday Americans do, at least intuitively. They’re the ones paying more at the cash register. Consumer price inflation is the highest in 40 years.

But the story gets worse. With or without inflation, there are certain things Americans must buy regardless of price. Gasoline for the car is near the top of the list. Prices for regular gasoline have risen nationwide from $2.76 per gallon to $4.01 per gallon in the past year.

That’s a 45% spike in prices. Just in the past month, gas prices have jumped 17%. The price spikes for mid-grade and premium gas are even higher. And this surge is not over. The administration is trying to blame it all on Putin, but those price increases were mostly before the war in Ukraine.

Less Money to Spend on Everything Else

With the recent and expected price hikes as a result of the war, gas will soon be $4.50 per gallon. The price is even higher in places like California and New York.

At current prices, the average consumer is spending almost $2,000 more on gas today than a year ago. And when Americans spend more on gas, they have less to spend on everything else. It’s that simple.

When it comes to cutting back, things like vacations, movies, dining out and other forms of entertainment are cut in order to leave enough for gas, food and heating bills. This is true even if there is no recession and gets even worse if there is. That has a negative ripple effect on the economy.

These trends were in place before the Russian invasion of Ukraine. When you add in the economic impact of the war, the likelihood of recession increases significantly.

I mentioned gas prices. One drag on global energy output is the fact that major energy companies are reducing their investments in new exploration and development. Because of sanctions, Exxon Mobil has announced that it is pulling out of an oil and gas project in the Russian Far East. Energy majors BP, Shell and Total have announced similar pullouts from Russian energy joint ventures.

These shutdowns come on top of what was already a global energy shortage. There are numerous suggestions being offered for how Europe can deal with an energy shortage if they are unable to buy Russian oil and gas or if Russia imposes an embargo on energy exports.

None of these solutions is practical in less than three or four years. Biden suggested that Europe could obtain natural gas from the Middle East, particularly Qatar. This ignores the fact that China has been buying all of the natural gas available under long-term contracts, so spare capacity is minimal.

Moreover, spare import capacity for liquified natural gas (LNG) in major countries including Spain, France, Italy and the U.K. is quite low compared to the amount needed to replace Russian exports.

And that leads me to the administration’s dirty little secret…

The dirty little secret among White House policymakers is that they like high energy prices because they help to promote the Green New Deal (really the Green New Scam) goals of wind and solar power to replace oil and gas. The more expensive gas is, the more feasible alternatives become. That represents the triumph of ideology over common sense.

There’s a role for wind and solar, but even if you favor them, one has to recognize that they’re non-scalable and intermittent and cannot come online fast enough to close the gap between existing energy supplies and growing demand for energy.

Given the opposition to oil and gas from climate alarmists and do-gooder ideologue investors like BlackRock’s Larry Fink, major oil companies are reluctant to invest large amounts in projects that may be deemed unwanted or even banned in years to come. This can be reversed in future years, but not in time to alleviate the current shortages.

While Ukraine is well known as an agricultural nation and energy transit hub, its role as a major manufacturing center is not as much appreciated.

Going back to the former Cold War economies in the 1970s and 1980s, much of the manufacturing capacity and high-technology development of the former Soviet Union was based in Ukraine.

Today, Ukraine has an important role in global manufacturing supply chains both in terms of finished products and intermediate manufacturing to supply parts to German auto manufacturers and other key industries in Western Europe.

The most long-term legacies of the war in Ukraine will be disrupted supply chains, shortages of consumer goods and much higher prices. Modern supply chains took 30 years to build and are being blown up in a matter of months. They will take years to rebuild.

In the end, we may have 1970s style stagflation which includes both weak growth (due to monetary tightening) and higher prices (because of supply disruptions). That’s literally the worst of both worlds.