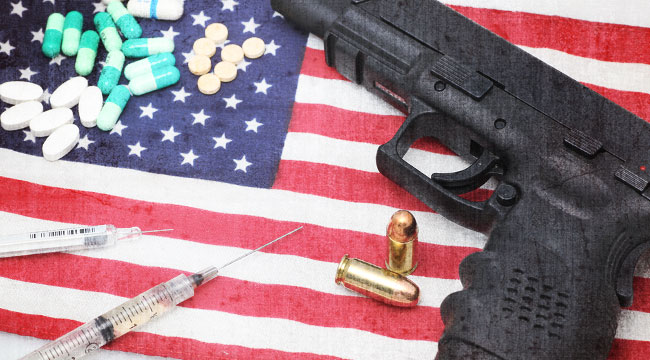 Gun Control and the War on Drugs

Many opponents of gun control support the war on drugs, and many critics and reformers of America’s drug laws tend to believe in gun control. Conservatives tend to fall into the first category and liberals into the second.

In reality, these two issues are more similar than many people might think.

Both types of laws are terribly immoral, as they are affronts to basic personal liberty. In a free society, all individuals own themselves and the products of their labor and exchange, and are free to do as they wish so long as they do not commit violence and fraud against other people. Arresting, prosecuting, and incarcerating people for the weapons they choose to own or the drugs they choose to consume are immoral violations of the rights of self-ownership and the corollary rights to control one’s own body and property.

Gun laws have rendered millions of Americans defenseless; drug laws, as in the case of medical marijuana, have left thousands of cancer, AIDS, and glaucoma patients helpless without the medical benefits of their preferred treatment. The interference with the right of people to choose their own medicines and means of self-defense has been a tragic matter of life and death for all too many peaceful Americans.

The most fundamental argument against drug laws and gun laws is moral: People have a right to own themselves, defend themselves, possess property, and control their own bodies. In practice, when this right is thwarted, disaster ensues.

Because of the particular nature of possession crimes, the similarities between gun control and the drug war do not end there.

Possession laws are very difficult to enforce in a free society. Since no one’s rights are being violated when someone owns a banned gun or smokes marijuana, there is no victim to report these “crimes” to the police and little natural incentive for third parties to report their neighbors to the authorities.

Instead, the police have to actively search for the offenders, an approach that predictably leads to the destruction of other civil liberties, such as rights to privacy and freedom from unreasonable search and seizure. Wiretaps, random searches and roadblocks, and spying become common.

Since few people are naturally willing to turn in their neighbors for victimless activity, the government has to create perverse incentives for people to turn in lawbreakers. The drug war and war on the Second Amendment have inspired the government to pressure teachers and pediatricians to ask children about what drugs or guns their parents might have.

Drug and gun offenders are also encouraged to testify against other offenders — oftentimes ones who committed much more minor offenses — in exchange for lowered prison sentences. This often leads to small-time offenders getting longer sentences than the big-time dealers. Such government programs to incite tattletelling belong in history book chapters about the Soviet Union; they have no place in a free society.

In addition, since victimless crime laws are difficult to enforce with due process, the burden of evidence becomes horrifically lowered. All that is needed is the presence of guns, drugs, or money alleged to have been used in illegal transactions — and, thanks to more recent changes in the laws, not even that. Often only a testimonial from someone who was offered lenient punishment by the prosecutor will do.

So thousands of people who didn’t even commit the crime — much less were proven guilty beyond a reasonable doubt — end up in prison. Restrictions against entrapment and the planting of evidence become increasingly eroded and ignored in a legal regime that prohibits peaceful possession of contraband.

Since millions of Americans violate gun laws and drug laws, and since it would be an economic and logistic impossibility to catch and punish even most of them — nor would most Americans want to see them all punished, whereas most would probably want to see all murderers punished — the punishments against people who break these laws end up being grossly unjust and disproportionate.

There are few crimes that have mandatory minimum punishments designated by the federal government, drug and gun offenses being the main ones. So we see drug offenders and gun offenders receiving prison sentences of five, 10, 20, or even 50 years; meanwhile, actual criminals who stole property or committed violence receive relatively light sentences and are released early owing to prison overcrowding.

Federal prisoners convicted of violating drug and firearms laws receive longer sentences, on average, than criminals convicted of sexual abuse, assault, manslaughter, burglary, or theft. This is a horrifying injustice, but it is inevitable once it is illegal to do something peaceful that people want to do.

Of course, the drug war and gun control have led to huge black markets in drugs and guns. With millions of potential customers, people who enter the illegal businesses are people who are likely to take risks and perhaps break laws in other ways. Without the legal mechanisms of arbitration, disputes are often settled with violence. The more money spent on enforcement, the more lucrative and risky the business, and the more violence results.

Economists have estimated that the drug war increases homicides by as much as 50%, and the Justice Department has estimated that 2 million crimes are stopped every year by private gun ownership. Few policies would cut down on crime more than ending the drug war and repealing America’s gun laws.

The violence caused by gun control and the drug war leads, predictably, to more government spending, more Draconian laws and enforcement, yet more crime and violence. The black-market money also leads to incredible corruption in the police and judicial systems. Bribes become commonplace, and in some places the line between organized crime and the police departments becomes dangerously blurred.

The massive amounts of money in black markets have also inspired the advent of asset forfeiture — an un-American, unconstitutional assault on liberty and property rights whereby the government can confiscate property that is suspected to be involved in these “crimes,” even if no one is formally accused. (In 80% of the cases, no one is actually accused.)

This has led to more police corruption, with departments and even individual law enforcers having a twisted incentive to confiscate as much property as they can to line their coffers and pockets. Asset forfeiture has mainly been rationalized as a gun control and drug war measure, but it has become a monstrosity of its own.

It’s led to such atrocities as the killing of Don Scott, a millionaire slain by LA County Sheriff’s Department agents who raided his Malibu home in the middle of the night, supposedly looking for marijuana, suspiciously shortly after Scott refused to sell his valuable land to the government. The Ventura County DA concluded that the agents were motivated by the prospect of using asset forfeiture to seize the land he refused to sell.

The vast black-market money in drugs and guns has also spawned more victimless-crime laws against “money laundering.” In a free society, people would be free to do with their property what they wish, so long as they don’t commit violence. This would include transferring it or moving it out of the country. This too has become heavily regulated by the government, thanks mainly to the impossibility of succeeding in the wars against guns and drugs.

The elevated crime associated with the black markets in guns and drugs has, predictably, led to more laws against guns and drugs. Instead of punishing the crimes themselves — and, ideally, ending the prohibitions that foster such crimes — politicians have focused on guns and drugs as if these inanimate objects were the root causes of gang violence.

The relationship between drug prohibition and gun control goes way back: The organized crime of Al Capone and the Mafia, which flourished as a result of alcohol prohibition, was the inspiration and rationale for the first major federal gun control, the National Firearms Act of 1934. It is interesting to note that instead of convicting Al Capone for either breaking laws against liquor or the actual commission of violence, the government used tax laws.

It then proceeded to find ways to ban the firearms used by organized crime. Instead of addressing the violence — which is hard to do when a vibrant prohibition-caused black market corrupts the justice system and amplifies violent crime — the government created more crimes out of peaceful behavior, which only made the problem worse, in the long run. Bad laws beget more bad laws.

Three years after passing the National Firearms Act, the federal government passed the most sweeping national drug law since alcohol prohibition, the Marijuana Tax Act of 1937, followed a year later by the Federal Firearms Act of 1938. Politicians stretched the Commerce Clause of the Constitution to pass both of these blatantly unconstitutional laws.

Particularly egregious are today’s laws that connect guns and drugs and punish people worse for possession of both than for the sum of each. Even the otherwise legal possession of a gun during the commission of a drug “crime” carries a federal five-year mandatory minimum sentence. Sometimes, sentences are doubled. And when drug offenders are released on parole or probation, they are often stripped completely of their right to keep and bear arms.

This atrocious assault on the basic human right of drug offenders released from prison has gotten precious little attention, partly because many supporters of gun rights are not sympathetic toward drug offenders, and many drug war reformers are all too apathetic about gun ownership rights.

As long as gun rights advocates don’t see the direct threat to all our civil and financial liberties that inevitably follow from the drug war — and as long as opponents of the drug war fail to understand the evils that predictably come from a war on guns — Americans will continue to see their priceless liberties steadily stripped away by both programs, in all their unconstitutionality and immorality.

If proponents of civil liberties, on the other hand, become more principled in their opposition to overbearing government laws against possession — or, more ideally, if they come to embrace the moral rights of all individuals to own weapons to protect their lives, families, and property and of all persons to possess and ingest what they wish — we can unite against both kinds of oppression and have a fighting chance of restoring two of the most fundamental freedoms we have tragically lost in this country over the last hundred years.

And because of the way these freedoms relate inextricably to so many others that affect all Americans, and because of their connection to violent crime, restoring the right to bear arms and ending the drug war would result in one of the greatest revivals of liberty and civility in the history of America.

The Marijuana Miracle That Saved Biotech

Biotech stocks are exploding. As oil reverses lower to begin the new trading week, the hot money is flowing back into drug stocks. Greg Guenthner reports…

Anthony Gregory is a research analyst at the Independent Institute, a policy adviser for the Future of Freedom Foundation, and a columnist at LewRockwell.com. Anthony’s website is AnthonyGregory.com.

Gold will return to the global monetary system. The only question is how…

“The first shot of World War III has been fired”…