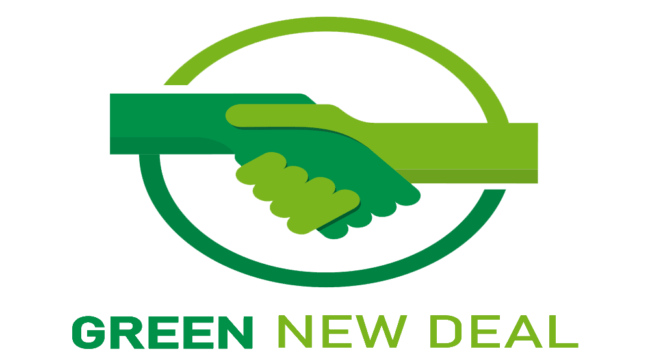 By now, you’ve heard of the Green New Deal, an ambitious agenda to decarbonize the economy. The overall Green New Deal calls for ending the use of oil and natural gas, moving to electric vehicles, solar, wind and geothermal power, imposing carbon taxes to reduce C02 emissions and providing government subsidies to non-carbon-based energy technologies.

The U.S. would also seek to embed these policies and priorities in new trade treaties and multilateral agreements. President Biden has already begun this process by rejoining the Paris Climate Accord, which actually doesn’t mean much; it’s mostly for show.

The Paris Accord is also a platform for pursuing the Green New Deal.

But it’s difficult to conceive of any other program that would do more harm to the U.S. economy and give more of a boost to the Chinese, Russians and Iranians.

Biden has temporarily halted all new oil and gas drilling leases and permits on federal lands. He’s moving quickly to make the ban permanent. This ban will kill the fracking industry and help to destroy what’s left of the coal industry. Because of reduced supply, it will raise energy prices globally. New carbon emission taxes will raise prices even further.

Why Kill the Keystone XL Pipeline?

Very significantly, Biden has also canceled the Keystone XL pipeline. This is a pipeline that brings oil from Alberta, in Canada, to the central United States. The pipeline would then go to Nebraska, where there would be a hub and a distribution center.

Killing the pipeline would cost tens of thousands of jobs. And when you count suppliers and subcontractors, it could be at least 100,000 high-paying lost jobs, mostly union jobs with benefits.

They release much greater CO2 emissions. All these trucks and all these trains are putting more CO2 into the atmosphere than a pipeline would. Again, that’s why you build a pipeline.

This is a good example of what I call the triumph of ideology over common sense. Common sense will say, build a pipeline for the reasons I just mentioned. But that doesn’t fit the ideology or their worldview. They’re immune to the facts. They just say pipelines are bad, so get rid of them.

A Propaganda Cover for the Real Objectives

Biden justifies the Green New Deal based on fear of climate change. I don’t want to dive into the climate change debate today. But there’s good science that says CO2 is more or less a harmless trace gas, not the existential threat that many environmentalists would have you believe.

Climate science provides almost no evidence that slight observable temperature changes have anything to do with C02 emissions. It is far more likely that any temperature changes are the result of solar flare cycles and volcanic eruptions. Some data strongly suggests that the earth is slowly cooling, not warming.

Scare tactics about the “costs” of hurricanes have more to do with expensive homes built on exposed barrier islands (subsidized by federal insurance programs) than the intensity of storms, which were actually greater and more frequent in the 1940s.

Climate change is a propaganda cover for the real goals of higher taxes, more regulation, slower growth and favors for tech entrepreneurs. It’s a globalist’s dream.

When you add it all up, Biden’s proposals will destroy high-paying jobs with benefits in the energy sector, raise energy costs for consumers and help flat-line economic growth.

Still, given the ideological momentum behind the Green New Deal and the imperatives of getting policies enacted quickly, it seems likely that some of these misguided provisions will become law at great cost to consumers and the economy as a whole.

But the prospects of the most radical parts of the Green New Deal becoming law are problematic. The projected adverse economic and geopolitical results will possibly derail the program in Congress. But, there can be no assurance of that. This will be one of the legislative priorities that Biden puts on a fast track because a Republican takeover of the House in 2022 would stop it indefinitely.

But the climate change agenda is seeping into all aspects of policy, including monetary policy. The original role of central banks was to provide a sound currency, which, in turn, facilitated government borrowing.

By the late 19th century, a new mission was added, which was to be a lender of last resort to banks themselves in a financial crisis. It held that in a crisis, the central bank should lend freely to solvent banks against sound collateral at a high rate of interest. That’s been flipped on its head.

Today’s version is to lend freely to anyone without collateral at a zero rate of interest.

From Lender of Last Resort To Climate Savior

With the job creation mandate in its portfolio, the Fed was empowered to interfere with almost every aspect of the real economy, including jobs, inflation, interest rates, liquidity and financial regulation.

As if that weren’t enough, economist Barry Eichengreen now calls on central banks, especially the Fed, to use their regulatory powers to control climate change! Part of the agenda would address racial inequality, income inequality and credit access for underprivileged groups.

These may be laudable goals, but it’s a long way from the Fed’s role as lender of last resort.

What’s frightening about this push to expand the Fed’s mandate is not that it can’t work, but that it could. A central bank could require commercial banks to lend money to solar and wind generating companies and deny credit to oil companies.

A central bank could require more loans to disadvantaged neighborhoods and require that no credit be made available to gun manufacturers or gun dealers.

There is no aspect of the economy and business activity that could not be affected positively by mandatory credit or destroyed by the lack of credit and access to the payments system. This is already being done to some extent by cabals of commercial banks. It would be even more powerful if required by central banks.

This is exactly the outcome that has been warned about for centuries by philosophers and political scientists. It is exactly the reason Americans abolished two U.S. central banks in the 19th century.