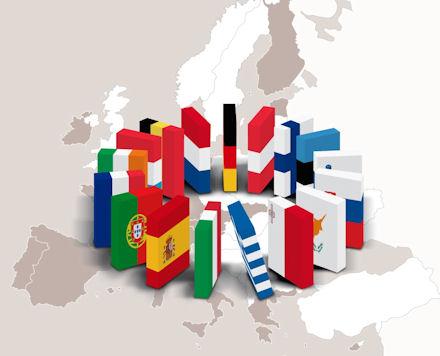 Greece and the End of the Euroland Fantasy

The one undeniable truth about the debt drama in Greece is that each of the conventional narratives—financial, political and historical—has some claim of legitimacy.

For example, spendthrift Greeks shunned fiscal discipline: here’s an account from 2011 that lays out the gory details: The Big Fat Greek Gravy Train: A special investigation into the EU-funded culture of greed, tax evasion and scandalous waste.

Or how about: Greek reformers want to fix the core structural problems but are being stymied by tyrannical European Union/Troika leaders: The Greek Debt Crisis and Crashing Markets.

Rather than get entangled in the arguments over which of the conventional narratives is the core narrative—a hopeless misadventure, given that each narrative has some validity— let’s start with the facts that are supported by data or public records, and move to the inevitable consequences of those facts.

Events in Greece are not just a template for sovereign debt crises to come; they also spell the end of the Euroland Fantasy of ever-greater prosperity as a result of ever-greater centralization and integration of European nation-states, economies, fiscal policies, banking, trade and currencies.

Here are the basics of Greece’s economy, via the CIA’s World Factbook:

Note that the euro fell sharply from $1.40 in 2014 to $1.10 currently, so any Eurozone GDP data stated in dollars has to be downsized accordingly. Many sources state Greek GDP was $240 billion in 2013; adjusted for the 20% decline in the euro, this is about $200 billion at today’s exchange rate.

What can we conclude from this data?

The problem with not having a national currency is that there is no mechanism to rebalance trade (current account) imbalances.

Ideally, a nation’s exports and imports balance, but in the real world, nations generally run trade surpluses or deficits. A trade deficit is a negative balance of trade incurred when a country’s imports exceed its exports. A trade deficit is settled by an outflow of domestic currency to foreign markets.

Trade must balance: every nation cannot run a trade surplus. The problem for nations with current account deficits is: where do they get the money to settle their negative balance of trade?

Nations with their own currencies can simply create the money out of thin air. This is in essence how the U.S. supports its massive trade deficits: the U.S. imports goods and services and exports U.S. dollars in exchange for the goods and services.

This works as long as the country running trade deficits doesn’t print its currency with abandon.

If a nation prints its currency in excess, the currency loses value, and imports become more costly to residents.  As imports rise in cost (priced in the local currency), people can’t afford as many imports as they once could, and imports decline, reducing the trade deficit.

On the other side of the trade ledger, the exports of the nation that is depreciating its currency becomes cheaper in other currencies. This makes the nation’s exports a relative bargain, and this tends to increase exports as global buyers take advantage of the cheaper goods and services.

With no currency mechanism left, nations borrow money to fund their trade deficit.  This is the engine of Greek debt since that nation adopted the euro in 2001.

If Greece had kept its national currency, trade deficits would have declined as the Greek currency depreciated and the cost of imports soared. Lenders would not have based their loans on the illusory guarantee of Eurozone membership.

There is no way for Greece to fix its debt problem if it keeps the euro as its currency.  Every purported solution that doesn’t address the core cause of the debt is mere theater.

In the subprime mortgage bubble of the mid-2000s, people with modest incomes were able to buy costly McMansions under false pretenses by exaggerating their income (via “stated income” or liar loans).

The mortgage originators issued the mortgage under equally false pretenses—that there was proper risk assessment/due diligence and a fair appraisal value for the property.

These false pretenses enabled unqualified buyers to borrow enormous sums—for example, someone with an actual annual income of $25,000 borrowed $500,000 with no down payment and very low initial rate of interest.

While the borrower bought into the dream of get-rich-quick “house flipping,” the real money was made by the originator and the lender.

It is widely accepted that Greece was admitted to the Eurozone under false pretenses—national debts were masked or understated, reportedly with the assistance of Goldman Sachs.

That a few at the top of the political/financial heap gained from Greece’s entry into the Eurozone is demonstrated by the “Lagarde List” of 2,000 individuals who transferred 50 billion euros out of Greece to Swiss banks in 2010, when the debt crisis was first making headlines.

These are clearly not middle-class households getting their assets out of risky Greek banks; these are oligarchs and the top .1%. (Source)

Since these transfers do not include money that fled Greece into the shadow banking system or hard assets, we can estimate the total sum taken out of Greece by the top 2,000 is more on the order of 100 billion euros—roughly half the nation’s GDP.

It is also widely accepted that at best 10% of the bailout funds trickled down to the Greek people—the vast majority bailed out private banks and other lenders. (Source)

These charts demonstrate how private loans to Greece have been transferred wholesale to the public ledger, i.e. taxpayers: 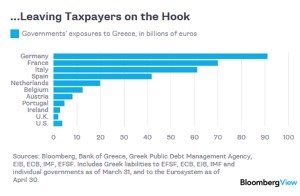 This is roughly the same template the too big to fail banks followed in the subprime mortgage crisis: after skimming vast profits from originating the loans, the banks faced insolvency as the phantom collateral of subprime mortgages evaporated.

To rescue the financial markets, the federal government bailed out the banks.

Faced with the prospect of a Greek default bringing down their over-leveraged banking sector (i.e. the European equivalent of a “Lehman Moment”), the EU leadership opted to bail out their own too big to fail banks on the backs of their taxpayers.

There are two conclusions to be drawn from all this, and they have nothing to do with who is demonizing whom or the political theater currently being staged:

These facts matter not only because contagion from Greek debt defaults may ripple in dangerous ways through the financial system, but because they are also true for many other members of the Eurozone.

As I predicted in my first article for Peak Prosperity four years ago, the Euro is a fatally-flawed monetary concept and what we now seeing playing out was eminently predictable from the start.

Many other countries are teetering on the same brink Greece is now falling off of. When they fail, the ripple effect their debt defaults will debilitate their creditor nations, causing a massive shrinking of the world economy.

The key takeaway is this: even if the countries we live in can’t live sensibly and within their means, we as individuals have the power to do so. But we need to seize that power now, before the next crisis arrives, for it to matter.

Uncle Sam is Coming For Your IRA

One of the advantages of 401(k)s and traditional IRAs is tax deferral. But eventually Uncle Sam will come calling for you. RMDs can be a real hassle and take a significant chunk of your hard earned funds, but there are ways to limit the impact of RMDs without arousing the ire of the IRS.