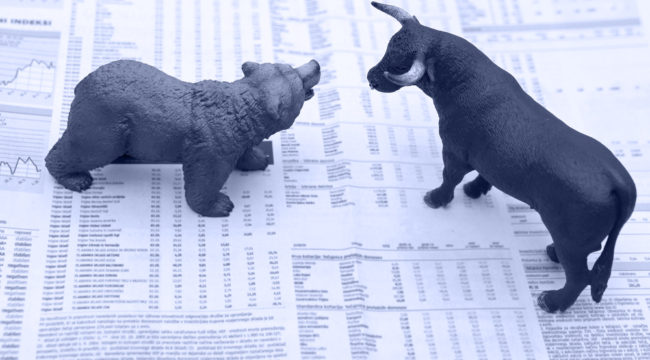 The “most-watched data point in history” came out yesterday.

January’s Consumer Price Index (CPI) would inform markets if inflation was at last slipping its leash.

Inflationary murmurs — and the aggressive rate hikes they might portend — were at least partly responsible for last week’s “correction.”

Further inflation omens meant the Fed could tug hard on the leash… and choke off the stock market in the process.

“It would be impossible,” says blogger The Heisenberg, “to overstate how laser-focused traders were on that number.”

Yesterday morning at 8:30… the Labor Department released the number.

Consensus was that January CPI would rise 0.3%.

What was the actual figure?

0.5% — a substantial beat — and its strongest showing in five months.

The market odds of three rate hikes this year immediately leapt from a coin-tossed 50% — to 62%.

And sure as sugar, Dow futures plunged 500 points on the news: 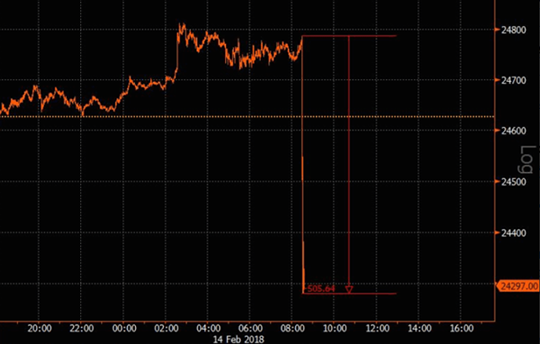 The bears had landed the day’s opening licks.

Meantime, the inflationary news set 10-year Treasury yields marching for the 3% Maginot Line many believe could trigger a market capitulation.

How much more territory could the bears lose before another taking another trouncing?

But around 10 a.m. yesterday, the battle tide suddenly turned in favor of the bulls…

As Shakespeare’s Henry V counseled his men, they stiffened their sinews… summoned their blood… and took to the offense.

The Dow Jones, the S&P, the Nasdaq, all began to surge.

By midday, they broke the bearish center.

The ensuing rout continued all afternoon.

Strangely — and this is what staggered us — stocks roared even as 10-year yields eclipsed the mark that supposedly triggered last week’s sell-off.

How could this be?

On the day when inflation came in hotter than expected…

Analyses at One Bank were likewise stumped:

“On a day when inflation beats in the U.S… stocks are up, yields are up… [it] does not add up.”

“The market’s celebrating like there’s something good about higher inflation and interest rates.”

Ah, but we fail to mention another actor in yesterday’s drama…

VIX — the barometer of market volatility.

Stocks sold off massively on the volatility, resulting in the Dow’s largest one-day point drop ever.

But yesterday, something like the reverse occurred — if on a scale less grand.

VIX fell on the day.

It shrugged its shoulders at the inflationary news that initially sent Dow futures plunging 500 points.

From over 25 the afternoon before, VIX broke below 20 by midmorning.

It ended the day around 19.

Did markets rise because falling volatility overpowered the bear of rising bond yields?

And are traders once again betting on lower volatility?

The VIX has been a leading indicator for the past two weeks. When it spiked, stocks came under pressure. When the VIX was down [yesterday] morning and futures were down, it was signaling the market could rally.

Let us solicit the opinion of the “salmon-colored rag” known otherwise as the Financial Times:

Some traders are also diving back into the “short-volatility” bet that unraveled in spectacular fashion last week… That money would also be helping to quell the volatility index.

It now appears a tug of war is upon us — between VIX and the bond market.

We don’t wish to exaggerate — or exaggerate much — but it appears the winner could decide the market’s fortunes this year.

But why would investors wager against volatility right now?

Perhaps they believe new Fed Chairman Jerome Powell will declare for stability next month… and keep interest rates where they are.

That is, they assume Mr. Powell is nothing other than a whiskered Janet Yellen.

Powell did say Tuesday that the central bank “will remain alert” to financial risks.

Since markets are pricing in a rate increase, a non-hike would almost be as good as a cut.

But if this is their wager, Jim Rickards says have another guess:

[Powell] will want to raise rates in March to show that he is not a pushover for market forces.

All eyes thus turn to Mr. Jerome Powell next month.