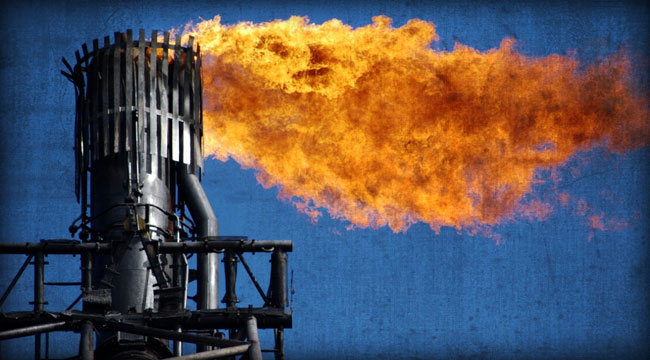 For weeks now, I’ve been waiting for the price of oil to face a modest pullback. Point being the current price of crude ($100-plus) is higher than the simple supply-and-demand fundamentals are leading on. Supply and demand be damned — the price of crude keeps inching higher!

Alas, it turns out we’ve been dealt a healthy dose of the oil market’s most sinister force: the “Middle East Effect”…

Since mid-April, the price of crude is up nearly $20 per barrel, recently hitting a short-term high over $105 a barrel. Of late, the market is feeding off the news of flare-ups in Syria, and more recently Egypt.

Of course, as you doubtlessly know, in mid-June, about 14 million angry Egyptians took to their local streets. Poor and hopeless beyond most outsiders’ ability to comprehend — and really, you’ve got to visit Egypt to see how bad off the people are! — the (literally) starving, jobless masses protested the year-old government run by elected ideologues of the Islamist Muslim Brotherhood.

In response to evident repudiation of a “democratically elected” government (long story there…), the well-fed Egyptian military guys answered the call by removing the clerical fascists who were and are, by most metrics, utterly incompetent to govern. Judge not, lest ye be judged, I suppose.

Here’s a look at just how this “Middle East Effect” has played out (including the most recent rally): 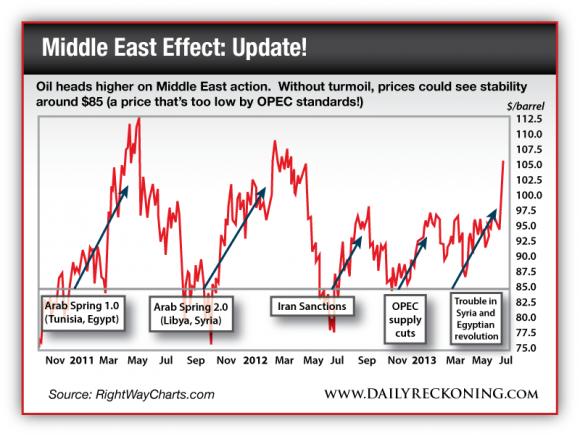 Each time the market heads lower toward the $85 threshold, a Middle East event spurs prices higher. I won’t get into conspiracy theory in this write-up — but believe me, OPEC has all the incentive in the world to keep the threat of volatility alive and well. After all, the $10-20 bump in prices since mid-April is nothing but money in the bank for OPEC producers.

Besides conspiracy, there’s plenty to cover…

Fact is, I’m still waiting for the straw that breaks this five-hump camel’s back. Indeed, sooner or later, we’re going to see oil prices drop below that $85 threshold — a move that will likely happen quickly once it begins.

The reason for a coming break in oil prices is simple: There’s simply too much supply coming online — in the form of U.S. shale and Iraq postwar production — and not enough latent demand to keep the price of oil supported.

So far, the straws are starting to pile up on the camel’s back. Just as we’ve predicted…

Add the two together and we’re seeing more than 1.25 million bpd from these two formations. And remember, that U.S. godsend, shale production, sprouted from just about nothing in 2008!

The next straw to add on the camel’s back is more akin to a bale of hay! I’m talking about the coming wave of production from Iraq.

This war-entangled region is quickly gaining barrels and expects to boost production by 29% in 2014, according to a senior official — year over year, that represents an extra million bpd. Looking ahead, Iraq could see production growth of another 4 million barrels per day by 2020.

A solid example of how this is happening comes to us from yesterday’s Wall Street Journal, “First production from Iraq’s Majnoon field is expected in July.” The Majnoon field, according to operator Shell Oil Co., is set to reach 175,000 bpd by the end of 2013. A ramp-up like that is no small potato — and that’s just one field!

So you see, there’s plenty of oil set to come online in the next few years — and with prices still buoyed over $90, production in the North American shale patch is going to keep steaming ahead.

In the meantime, this is all gravy for U.S. producers. The one silver lining to the Middle East Effect is that domestic producers will enjoy selling their crude at higher global prices.

So you see, a social revolution in the Middle East isn’t all bad news. America’s oil boom is moving ahead full steam — if anything, Middle East action is spurring growth even more!

Grabbing a handful of domestic oil producers is your best way to play this situation.
You see, just as OPEC gains when the price of oil shoots above $100, so do domestic oil producers. Each day over $100 or in the high-$90s allows domestic producers to increase their margins. Increased margins and cash flow, as we’ve seen so far this year, will increase share price and allow companies to continue paying substantial dividends.

And here’s the kicker…

Two years since the first Egyptian revolt, U.S. oil producers have truly hit their stride. North America’s shale gale is in full swing. There’s more and more new oil coming to market. This trend will continue. Enjoy it while it lasts, although beware political pressure on fracking technology and oil transport. Opponents of oil and fracking still hate pipelines.

As I’ve stated before in other issues and essays, the traditional concept of onshore well drilling has transformed into a manufacturing model. That is, the savviest operators have turned drilling and fracking new wells into an assembly line process. You build a drill pad and then use the same staging site, machinery, drilling rig, etc., to drive multiple holes out into the hydrocarbon-bearing resource.

Efficiencies are kicking in, and break-even prices for U.S. oil are headed lower — places like North Dakota’s Bakken and Texas’ Eagle Ford and Permian Basin are booming! That is, while in 2011 the verdict was still out for the profitability of U.S. shale oil, today we know that efficient producers can make a killing.