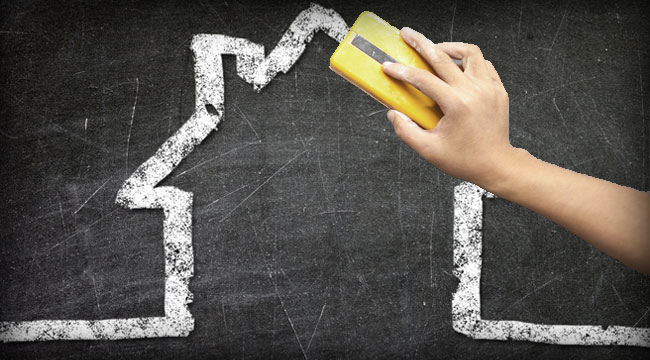 Fannie Mae and Freddie Mac, the massive mortgage giants that own or guarantee over half of all mortgage loans in the U.S., may finally be headed for that great by-and-by.

In an unexpected display of bipartisan lucidity, senators from both parties are drafting a bill to liquidate the mortgage agencies within five years and privatize the loans they hold, replacing them with a new agency that will act as an insurer of private mortgages, reports Bloomberg News.

With their recent profit surge amid rising home prices, hedge funds such as Paulson & Co. Inc. and Claren Road Asset Management LLC “have been buying shares of the companies’ junior preferred stock and urging lawmakers to forget about abolishing them,” Bloomberg writes. Proceeds from the liquidation would go to the Treasury Department, according to the bill, since the U.S. government is the senior preferred shareholder in both companies, followed by holders of the common shares.

“We hope to find something that materially improves from the past system, where gains were privatized, losses were left for the taxpayer to clean up and the system was way too thinly capitalized against downturns,” said Laura Herzog, a spokeswoman for Sen. Bob Corker (R-Tenn.), who, along with Virginia Democrat Mark Warner, is drafting the bill.

We’ll believe it when we see it, but it is nonetheless encouraging.

The Daily Reckoning has a long history of sounding warnings about the mortgage mess that eventually blew up, calling the “Great Mortgage Finance Bubble” back in January 2003. Back then, we noted:

“In the past, a weakening housing market and rising inventory would rattle the nerves of local bankers; financing for new construction would quickly run dry. But this New Age housing cycle has evolved into something quite different. For one, it is dominated by large national builders with close ties to Wall Street and the mortgage-backed securities marketplace. Importantly, these builders today have unlimited access to cheap finance to pursue their aggressive growth strategies.

“Not dissimilar to the telecom sector during 1999, The Street, bankers and Washington are today content to cheer along the construction boom and disregard the consequences.”

As The New York Times noted just yesterday, big Wall Street firms are again behind the current run-up, with “large investment firms [spending] billions of dollars over the last year buying homes in some of the nation’s most depressed markets. The influx has been so great, and the resulting price gains so big, that ordinary buyers are feeling squeezed out. Some are already wondering if prices will slump anew if the big money stops flowing.”

Amazing how little things change. One wonders whether we have another five years before history repeats itself.

You Take the Risk, Billionaires Collect the Profits

As president elect Trump continues to fill out his cabinet, it is the billionaire class that has escalated its profits, at your expense. Here’s why…