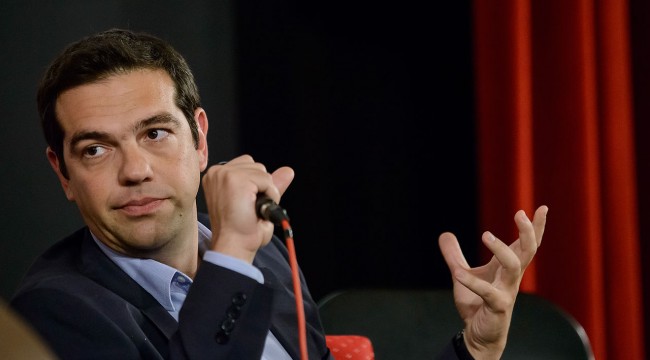 Good on You, Alexis Tsipras (Part I)

Late Friday night a solid blow was struck for sound money, free markets and limited government by a most unlikely force.

Namely, the hard core statist and crypto-Marxist prime minister of Greece, Alexis Tsipras, set in motion a cascade of disruption that will shake the corrupt status quo to its very foundations. And just in the nick of time, too.

After 15 years of rampant money printing, falsification of financial market prices and usurpation of democratic rule, his antagonists — the ECB, the EU superstate and the IMF — have become a terminal threat to the very survival of the kind of liberal society of which these values are part and parcel.

Keynesian central banking and the Brussels and IMF style bailout regime — which has become nearly universal — eventually fosters a form of soft-core economic totalitarianism. That’s because the former destroys honest financial markets by falsifying the price of debt.

So doing, Keynesian central bankers enable governments to issue far more debt than their taxpayers and national economies can shoulder. At the same time they force investors and savers to desperately chase yield in a marketplace where the so-called risk free interest rate has been pegged at ridiculously low levels.

That means, in turn, that banks, bond funds and fast money traders alike take on increasing levels of unacknowledged and uncompensated risk, and that the natural checks and balances of honest financial markets are stymied and disabled.

Short sellers are soon destroyed because the purpose of Keynesian central banking is to drive the price of securities to artificially high and unnatural levels. At the same time, hedge fund gamblers are able to engage in highly leveraged carry trades based on state subsidized (free) overnight money, and to purchase downside market risk insurance (“puts”) for a pittance.

When an unexpected shock or “black swan” event threatens to shatter confidence and trigger a sell-off of these drastically over-priced securities, the bailout state swings into action indiscriminately propping up the gamblers.

That’s what the Fed and TARP did in behalf of Morgan Stanley and Goldman back in September 2008. And it’s what the troika did in behalf of the French, German, Dutch, Italian and other European banks, which were stuffed with unpayable Greek and PIIGS debt, beginning in 2010.

Needless to say, repeated and predictable bailouts create enormous moral hazard and extirpate all remnants of financial discipline in financial markets and legislative chambers alike. Since 2010, the Greeks have done little more than pretend to restructure their state finances and private economy, and the Italians, Portuguese, Spanish and Irish have done virtually nothing at all.

The modest uptick in the reported GDP of the latter two hopeless debt serfs are just unsustainable rounding errors. The numbers are flattered by the phony speculative boom in their debt securities that was temporarily fueled by Mario Draghi’s money printing ukase that is presently in drastic retreat.

This Monday morning push has come to shove; Angela Merkel and her posse of politicians and policy apparatchiks were not able to kick the can one more time after all.

Instead, the troika’s authoritarian bailout regime has stimulated political revolt throughout the continent. Tsipras’ defiance is only the leading indicator and initial actualization — the match that is lighting the fire of revolt.

But what it means is that there is now doubt, confusion and fear in the gambling halls. The punters who have grown rich on the one-way trades enabled by the money printing central banks and their fiscal bailout adjutants are being suddenly struck by the realization that the game might not be rigged after all.

So let the price discovery begin. In the days ahead, we will catalogue the desperate efforts of the regime to reassert its authority and control and to stabilize the suddenly turbulent casino.

In riding the central bank bubbles to unconscionable riches the big axes in the casino have falsely claimed to be doing “God’s work”.

As they are now being forced to liquidate these inflated assets, they actually are.

Last fall one of the most detestable members of the regime, Jean-Claude Juncker, arrogantly issued the following boast:

“I say to all those who bet against Greece and against Europe: You lost and Greece won. You lost and Europe won.”

This morning that smug proclamation is in complete tatters. Good on you, Alexis Tsipras.

I originally posted this article, right here, at my Contra Corner blog.

The Financial Road Map for 2018

Economist and best-selling author Nomi Prins reveals a Financial Road Map for 2018. Here’s what to expect with the markets and your money…