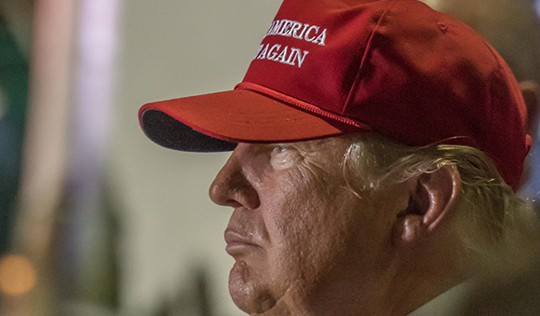 Good for Donald, These Clowns Need to Be “Rattled”

Bully for The Donald!

These clowns need to be rattled — right to their very bones. And we might as well start with our own snake oil salesman in chief.

It seems that Obama can’t stop taking bows for the awesome recovery he claims to have presided over and the 14 million new jobs he claims to have created. Yet those claims are as exaggerated as anything that Trump has ever let fly.

>> At the February 2008 peak, prior to the crisis, the U.S. Bureau of Labor Statistics (BLS) reported 138.5 million nonfarm payroll jobs in existence

This means one thing: Nearly 9 million, or 61%, of the 14 million “new” jobs Obama has been crowing about are not new at all.

These other 9 million jobs are actually what are called “born again” jobs. They consist of lower-paying and lesser-quality jobs than the ones eliminated during the crash and so-called Great Recession.

For instance, there has been a loss of 2.3 million goods-producing jobs in manufacturing, mining/energy and construction. Those jobs paid an average of $58,000 per year. Now, they’ve been swapped out for 1.9 million jobs in leisure and hospitality that pay less than $20,000 per year.

The White House may have somehow buried this in its awesome economy fibs, but flyover America has surely noticed. And that’s where Trump has been striking a deep nerve of justifiable discontent.

Behind all the White House bombast about jobs and recovery, there is a stinging rebuke embedded in even the BLS’ highly medicated and surely exaggerated jobs counts.

The U.S. economy has been creating net new jobs at the paltry rate of 56,000 per monthover the last eight years. During this time, the growth rate of the adult population has been 200,000 per month. This means jobs are being created for only one-fourth of the adult U.S. population.

That actually represents a worsening of the trend that has been underway since the turn of the century. There are still fewer prime age workers between 25 and 54 years holding full-time jobs than there were 16 years ago. It is not surprising, therefore, that the employment-to-population rate, one of the most vulnerable elements of the labor force, remains in the sub-basement of modern history.

As shown below, the employment rate for workers with only high school diplomas dropped from 60.5% before the crisis to 54.5% during the Great Recession. And it has not recovered one bit. That is, $800 billion worth of un-shovel ready fiscal stimulus and $3.5 trillion worth of Fed bond buying has had no impact, at all.

This is not because of the aging demographics of the baby-boom generation, as per the standard Keynesian meme. For want of doubt, the graph also shows that the participation rate of workers over 65 years has been rising sharply since 2008. 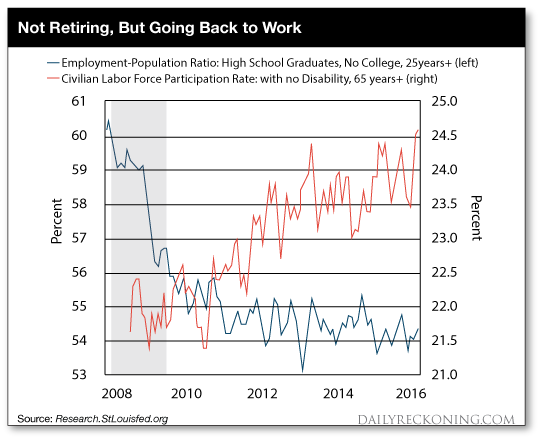 The truth is, there are fewer full-time, full-pay breadwinner jobs in the U.S. economy today than there were in December 2007. A snarkfest from the White House podium can’t change that reality in the slightest. But it does explain why the mainstream U.S. press and world leaders alike have apparently been “surprised” by the fact that Trump has suddenly become the GOP’s presumptive nominee.

Indeed, the Trumpster has spooked the establishment at home and abroad. His improbable rise amounts to a repudiation of the whole era of Bubble Finance. That era has been orchestrated by the world’s Keynesian central bankers and their governments. They have concocted a forgery of prosperity with debt, stock market bubbles and soaring transfer payments.

That phony prosperity is palpably unsustainable, and even the unwashed voters of the flyover zones are figuring it out quickly. The truth is, Trump’s economic plan may be only semi-coherent at best and surely destabilizing to the extent that he would actually trigger a full frontal trade war…

But here’s the thing. The status quo policies now grinding toward the cliff are no more viable. Is it not unsurprising, therefore, that flyover zone workers actually do wonder how government welfare and transfer payments can continue to grow twice as fast as the gains in wages and salaries without ultimately impaling the country in debt and taxes? 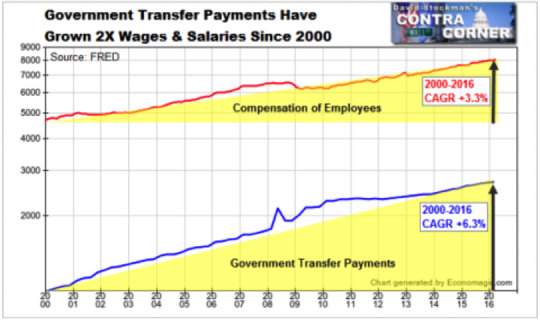 Year after year, the G-7 jabber about stimulating growth and energizing the consumer, as they did again this time. Yet not once has the obvious been mentioned in a post-meeting communique: How can main street households be expected to shop until they drop when they are already buried in Peak Debt?

In fact, all the momentary gumming about too much debt that accompanied the immediate months after the crisis has long since faded from the narrative entirely. After a 30-year borrowing binge, deleveraging was needed more than anything else. Yet, not a dime of the $14.3 trillion of net debt taken on by the household sector through 2007 has been alleviated. 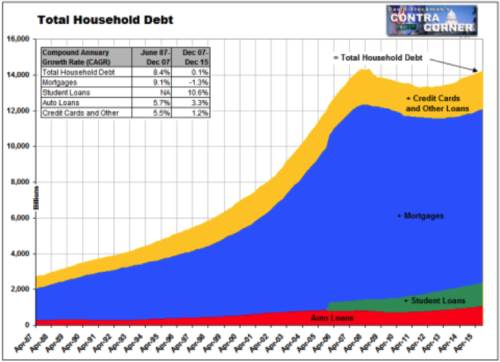 The story is even worse on the corporate side. Bloomberg posted a chart today which reminds us that it is the G-7 leaders who are out of touch with reality, not the GOP nominee who is decidedly unschooled in the double-talk and delusions of the leaders who gathered in Japan.

At $6.7 trillion, corporate debt is now more than double the level it was on the eve of the last crisis, but that’s not the half of it. On the margin, virtually all of that gain has gone into financial engineering — that is, stock buybacks, unproductive and vastly over-valued merger and acquisition deals, and various forms of leveraged buyouts and recapitalizations.

Indeed, rather than crowing about a non-existent recovery in the flyover zones of the nation, the White House should be downright alarmed about what is happening to capital spending — the very wellspring of capitalist growth. Since they peaked in mid-2014, nondefense CapEx orders (excluding aircraft) are down by nearly 12%, which is well below even their pre-recession levels.

The financial and economic condition of the remainder of the G-7 nations is even more rickety than that of the U.S. So perhaps the purportedly “rattled” leaders who gathered in Japan could rattle us this: Why do they continue to pretend that Japan is not run by madmen who are a clear and present danger to the entire global economy?

In a moment of exceedingly rich irony, the government of Japan actually requested a statement regarding the self-evident crisis brewing in the world financial system. But it was turned down by the balance of the G-7 on the grounds that acknowledging reality might cause the global bubble to burst. As was clinically explained by the mainstream media,

… Hence it is not entirely surprising that a coordinated response to an unevenly felt dynamic could not be reached at the G-7 negotiating table,” Maguire said. “Moreover, the G-7 is obviously aware of the ‘announcement effect’ the official communique has,” he said. “In such a situation, warning of negative risks and sentiment can become self-fulfilling.

Indeed, Prime Minister Abe had actually gone through a show of presenting documents to the G-7 indicating there was a danger of the world economy careening into a crisis on the scale of the 2008 Lehman shock.

So was one of the clowns actually fessing up?

Not at all. To the contrary, Abe has frequently said he would proceed with a planned increase in Japan’s sales tax in April 2017 unless there is an event on the scale of Lehman or a major earthquake. So he was simply looking for world leaders to confirm the basis for his intention to announce still another deferral of Japan’s absolutely unavoidable need to get its fiscal house in order:

Japanese Prime Minister Shinzo Abe plans to delay an increase in sales tax by two and a half years, a government official said on Sunday, as the economy sputters and Abe prepares for a national election.

Abe told Finance Minister Taro Aso and the secretary general of his ruling Liberal Democratic Party, Sadakazu Tanigaki, on Saturday of his plan to propose delaying the tax hike for a second time, until October 2019, said the official, who was briefed on the meeting.

The prime minister, who has promised to announce steps on Tuesday to spur economic growth and promote structural reform, is also expected to order an extra budget to fund stimulus measures, just two months into the fiscal year and on the heels of a supplementary budget to pay for recovery from recent earthquakes in southern Japan.

That’s right. Japan is still spending nearly double what it collects in taxes, and its public debt is heading for a catastrophic 250% of GDP. But these lunatics want to kick the can into the next decade, even as Japan Inc. races toward becoming a bankrupt retirement colony.

No wonder they are rattled by The Donald. Were he to be elected President, he just might show up at a G-7 summit calling a spade a spade.