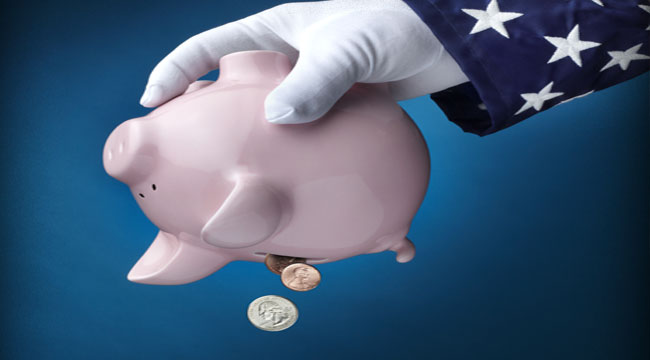 People will be paying more and getting less from their governments as health costs and pension obligations will force state and local governments to adjust their budgets over the next 50 years, according to a new report.

The new report from the Government Accountability Office, a nonpartisan congressional agency that audits federal programs, paints a dreary picture of the future of municipal finances in the United States.

The report released Thursday, May 9, measures the so-called “fiscal gap,” which the GAO says is a measure of the action necessary to achieve fiscal balance over the next 50 years. With expenditures set to rise as a percentage of GDP over the next few decades and revenues projected to remain mostly flat, the gap will grow year over year unless significant action is taken.

Closing the fiscal gap solely with spending cuts or tax increases would require either a 14.2% reduction in state and local government expenditures or an equal increase in taxes, the GAO found.

“More likely, closing the fiscal gap would involve some combination of both expenditure reductions and revenue increases,” the report states.

The report points to the fact that growth in the costs of Medicaid and other health compensation and retirement payments will drive those cost increases that push local governments off the cliff. Meanwhile, the GAO model suggests that wages for state and local workers will decline as a percentage of GDP.

Rick Dreyfuss, a senior fellow on public pension issues with the Manhattan Institute, a national free-market think tank, said the debt facing many states and municipalities in the nation is not a very optimistic scenario.

“I think it is all but inevitable that the next generation will have a reduced standard of living, because their tax dollars will be paying off the promises made by the current generation of workers,” Dreyfuss said.

Since the report looks at state and local budgets in aggregate, the GAO warns against using the conclusions as a forecast for any specific locality.

But there is no shortage of specific examples from which to choose.

Start with California, something of a poster child for public pension recklessness.

Three cities in the state — Mammoth Lakes, Stockton and San Bernardino — are going through municipal bankruptcy, largely because of unsustainable pension costs. An ongoing court challenge will determine if those obligations can be reduced to help those cities, or others in the future, climb out of the hole.

And a recent report from Stanford University says California’s retirement fund for teachers and state workers is more than $300 billion in debt, even if it achieves expected levels of investment returns for the next several decades.

If the returns come up short of that amount, the deficit could exceed $500 billion, according to the Stanford study.

A January report from the Illinois auditor general revealed the depth of the pension crisis in that state, where the five public pension systems are facing a combined unfunded liability of more than $130 billion.

Worse, the funds are paying out more in benefits than they are taking in each year in contributions from employees and taxpayers.

“We have long said that lawmakers’ approaches to drafting state budgets only put states closer to the financial cliff, and the recent GAO report illustrates just how close states are to going over the edge,” Williams said.

But for a variety of reasons, states and municipalities have dug themselves deep pension deficits.

In some places, lawmakers redirected tax dollars meant for pensions contributions to other purposes for political reasons. Elsewhere, benefits were increased for public-sector workers without the necessary increases in taxes and contributions to pay for them.

Finally, investment returns that were generally pegged too high caused pain everywhere when the market crashed twice during the first decade of the 2000s.

The GAO report indicates in the abstract what most cities and states will be feeling in terms of raw dollars for decades to come.

In Pennsylvania, the state budget will have to expand by about $500 million each year for the next decade to cover increasing pension obligations after a decade-long “pension holiday,” during which funds were redirected elsewhere.

Since revenue is not expected to grow at anywhere near that same clip, other parts of the budget will face the ax — or tax increases will be required — to pay the pension bills.

In Florida, where one report indicates more than 30% of municipalities have less than half the necessary funds to meet their pension obligations, the average municipality can expect to see their pension costs double in the next three decades, according to the Center for Retirement Research at Boston College.

Dreyfuss questioned whether the political will exists to address the pension funding crisis, since any meaningful changes will likely mean a combination of higher taxes and spending cuts — something few politicians are likely to support.