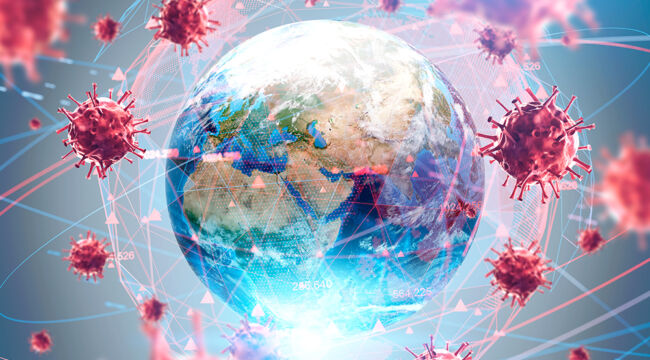 I’m now looking again at the polls of Biden’s popularity. They are shocking, even devastating.

We are looking at nearly a 12-point split between approval and disapproval. I’m assuming that the reality is much worse, given that everyone knows what one is supposed to tell the pollsters. They are not looking for disapproval. They are looking for compliance. That so many are willing just to say what they think is striking.

To me, these numbers represent far more than the unpopularity of one guy. They are but a sign — a slight one but one we can see — of something far more fundamental going on.

What we see here is a deeply dangerous loss of trust not only in government, but in everything, including tech, media, experts in general, and a growing cultural perception that truth is no longer accessible to us.

We are living amidst the rising of information chaos, the late stages of what Robert Malone has called mass formation psychosis. Where it ends up cannot be known in advance, but that something is coming and will hit us very hard is no longer in doubt.

I’m still astonished that all of this happened in a mere two years. We went from the feel of peace, prosperity and contentment to absolutism and chaos so quickly. Every time it has seemed like it was ending, there has been another round of awful.

And as I’m writing now, the nation is awash in sickness, despite all the measures, the vaccinations, the obsessions, the mitigations with masks and you name it. It has all failed.

The pandemic will end as they always do: with the arrival of herd immunity. That stage becomes the point at which the virus is a normal part of life, breeding with other viruses and becoming normal and seasonal like any sickness.

My experts tell me that we are about a month away from that point in the Northeast, but that it has yet to make the rounds in the South, which could be facing a tough spring and summer.

Regardless, it comes to an end, with or without vaccination. What does not end so easily is the statism, the monitoring, the despotism, the urge to control, the rules, the threat that it could all happen again.

The answer is likely to be bound up with noncompliance. Many people are already there. They are done obeying. Many people have quit their jobs. They have moved. They have upended their lives in shocking ways. They have completely rethought their relationships to civic institutions and leaders. And they are ready for something entirely new.

The psychologist who is the world’s leading scholar on mass formation psychosis said something interesting in a recent interview. He is Dr. Mattias Desmet of the University of Ghent. He says that the answer is not merely to go back to the previous normal we used to enjoy. It was that old normal that set the stage for the upheaval. We cannot go back because then we risk repeating what we just lived through.

I will say it, however.

It must be rooted in the traditions of freedom. We need to learn to find happiness in human choice, tolerance and peace with our neighbors. We need to again find joy in work and fulfillment in prosperity and health.

That is a rebuilding exercise that will consume the dominant part of the rest of our lives.

It will likely have to take place in the midst of a growing economic crisis. Inflation might calm down a bit in the first quarter, but the money sloshing around the country and the world has to end up somewhere.

It will eventually convert to a much different price level that we have right now. All our savings are at risk. All the things we took for granted in the past could come into question as people look desperately for a way out.

What Can We Trust?

People masked up. They distanced. They curbed their social activities. They complied with the shots, one, then two, then the booster. They did everything right. And they got the virus anyway.

It is impossible to underestimate the implications of this for millions of people. They trusted the experts. The experts were wrong. Now people have to ask themselves what is next.

Above all else, this is going to be about regaining health. Eat right. Exercise. Get sun. Stop the junk food. Focus on fundamentals. Eat fresh things. Stay as stress-free as possible. Stop playing games with substances that are unhealthy. If we really do all intend to live past the age of 80, we are going to have to rethink many aspects of our lives.

In addition, some of the most astute cultural observers out there are predicting a widespread return to religious faith. Sadly, many of the religious institutions of our past acquiesced to the tyranny. They did not resist. They even preached compliance with practices pushed by Fauci and others, surrendering their leadership in the spiritual realm.

The ones that did not were the oddballs out there, the Amish, the Orthodox Jews and the independent evangelicals. They kept their integrity. They are likely to thrive in the future.

Other institutions that sailed through this crisis will thrive as well. It is impossible not to notice that Bitcoin and associated cryptos paid almost no attention at all to the pandemic, to the shutdowns, to the crackdowns and controls. Blockchain applications continued to function beautifully, without a hitch.

Friends of mine are careful these days to put away as much as 20% of their paycheck into Bitcoin and other cryptos. They leave them there, not spending them unless absolutely necessary. They keep them in cold wallets, holding them and guarding them for the days ahead. This makes sense.

We once imagined that cryptocurrency would become the hand-to-hand currency that would replace fiat money. That day may be coming, but it is a very long way off.

The economic function of crypto has been in fact to serve as the safe haven in a world gone mad, an uncorrupted and incorruptible source of value that ignores the nation-state and the madness of political culture.

I never wanted to live in a world with mass loss of trust in everything that so many generations worked so hard for so long to build. But that is where we are. Now is the time for resilience and fortitude, and all the other virtues taught to us by the ancients.

Despite all our modern technologies and conveniences, in the end what will save us are not our gadgets, but our values.