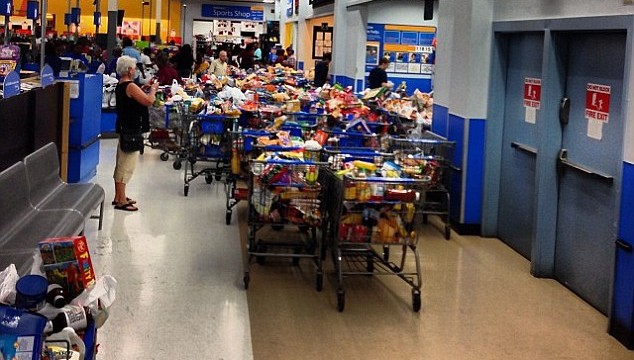 Free Food for All at Wal-Mart!

This past Saturday, tens of millions of welfare recipients across 17 states found themselves in a tough spot: A computer glitch rendered their EBT cards unusable due to a glitch that left them with no discernible spending limit. Most sensible stores refused to honor them until the glitch was fixed.

Some customers in Louisiana, however, had a very early Christmas present. Several Wal-Mart stores decided do the selfless thing and honor the no-limit cards anyway.

The shoppers did what any rational people would do: They went on a spending spree that would make a congressman blush.

As CBS reported: “Wal-Mart and local police in Springhill and Mansfield… were called into the stores to help maintain order Saturday as shoppers swept through the aisles at two stores and bought as much as they could carry.”

Springhill, La., police chief Will Lynd declared it was “worse than any Black Friday” he’d ever seen.

A Wal-Mart representative told the media that they honored the cards so that recipients “could get food for their families.” No word on how much fiat the stores raked in that day, courtesy of taxpayers.

The pandemonium ended at 9 p.m., when a voice thundered the end of the spree over a loudspeaker at the Springhill Wal-Mart, declaring the glitch had been fixed. Shoppers abandoned heaping carts in the aisles like cars on a freeway during a zombie apocalypse.

Zero Hedge opined: “Perhaps it was all just a test run for what will happen when the Fed finally waves a white flag and gives every American an unlimited-spending debt card in a desperate, last-ditch effort to finally enact Bernanke’s monetary helicopter paradrop wet dream.”

As if unlimited credit could possibly be a bad thing.

P.S. The Wal-Mart glitch serves as a great reminder for what people do when they have access to unlimited credit. As the Fed switches leadership in the coming months, readers of The Daily Reckoning email edition are briefed on the need-to-know points behind the media stories… and learn how they can protect their wealth from the masters of fiat inflation. Click here to subscribe.

Today we I talk about cutting the parental welfare cord… PNC’s Millennials & Investing survey discovered that only 81% of millennials have full-time jobs. And the amount of expenses parents are paying for adult children isn’t exactly pocket change… An average of $7,000 a year.