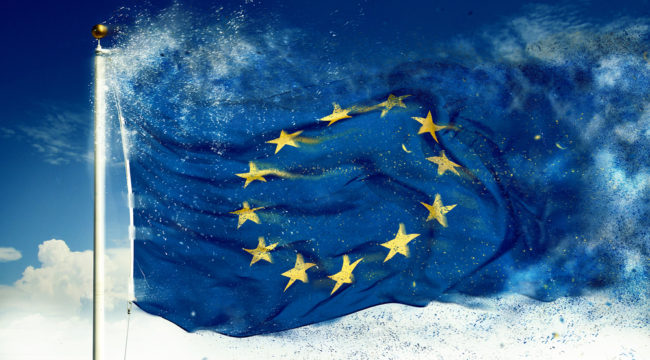 How France Could End the European Union

Major elections will soon be held in the Netherlands, France and Germany – what some have argued will be the most divided and diabolical political environment Europe has had in decades.

Since the major wars that divided the continent, the cosmopolitanism that brought divisions in Europe together are now under considerable opposition. Europe continues to face escalating influences from the Russian government, rampant economic inequality, unequal responsibilities of refugee influx and growing threats of terrorism.

Nomi Prins, a former Managing Director on Wall Street and economic historian, says what all this means is that we should expect, “More QE manifestations from the European Central Bank, a weaker euro, more bubbles in major European stock markets and greater presence from conservative, protectionist politicians.”

The conservative, protectionist politicians that she highlights are making great strides currently in France ahead of April elections. While Brexit might chip away at the European experiment, France offers a petri dish of Euro-divisions between the far left and the surging right.

European Commissioner for Economic and Financial Affairs Pierre Moscovici told CNBC, “I’m confident. I know my citizens and my compatriots well and know they are not going to elect a candidate who is proposing France exiting (Europe). That would be the end of the European project.”

If that sounds familiar, it could ring true to the type of narrative that was being heard in the U.S on various talk shows during the weeks and months leading up to Trump’s victory.

During the CNBC interview with Moscovic, who is considered the EU’s tax chief, he held reluctance and outright opposition to the idea that France could elect Le Pen.  However, he did offer up what that election would cast for the future of the European Union.

“If Marine Le Pen comes in office, if she asks for a referendum on Frexit, what would Europe be about? Europe was founded precisely in order that France and Germany and others work together in a common project.”

But the reality is, these are uncertain times.

In a recent French poll, the first-round in the election would have Le Pen, the anti-euro candidate, ahead with 27% of the vote, where she has risen in poling lately.  The next two candidates follow with 20% each and remain stagnant in polling.

The poll also shows that in the second round Le Pen would currently lose 58% to 42%. However, there is still considerable time and opportunity between now and then.

In February 2017, Europeans celebrated the 25th anniversary of the Maastricht Treaty being signed. Prior to that 12 nation major Treaty signing, Europe was in turmoil.

The wounds of the Cold War were still fresh. The Berlin Wall had just fallen, Germany was still navigating reunification. Eastern European states were questionably shifting toward democratic governments.

The reality is that the left wing French opposition candidates’ lead over Le Pen has been cut in half over the past two weeks. Security fears and surging euro-skepticism, core issues attributed to the far-right party, are pushing the polls in France to much tighter margins.

The unification of Europe, through the Maastricht Treaty, brought those economic and political divisions away from further conflict.

If Le Pen, the National Front leader of the French right party, was to claim victory it could bring mass political and economic instability.  Speculation is that the EU as it is known today would become extinct. 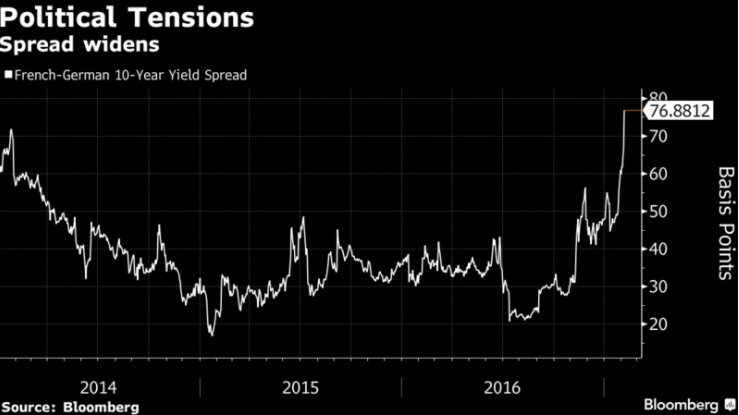 One major European investor penned that, in the face of a French exit from the EU:

“A financial system that already suffers from weak net income margins and more than 160 billion euros in non-performing loans, would collapse as these bad loans escalate and the losses in the banks’ bond portfolios eat away their core capital.”

“This would inevitably lead to Greek-style capital controls and bank runs as the entities would lose liquidity support from the ECB.”

Under these outcomes, France leaving the euro currency could bring about the biggest sovereign securities default ever seen.

This economic and banking turmoil could be the biggest negative impact and cause a global spillover. If France was to elect Le Pen and push for an exit of the EU, there would be no clean separation from the union and the U.K is attempting.

Turning to Jim Rickards, author of the Road to Ruin, who continues to update his macroeconomic analysis on the situation noted that “Le Pen won’t win, but she’ll drive markets and media mad in the meantime.”

Rickards goes on, “I don’t think Marine Le Pen will win in France. Because we’ve had so many shocks, people are getting set up for more shocks such as a potential victory of Marine Le Pen or a loss by Angela Merkel.”

Applying his forecasts and analysis Rickards’ remarked he is taking the other side of the equation. “The shock will be that there won’t be a shock, namely that mainstream parties will win in France and Germany.” He warned cautiously that, “there are always other shocks on the horizon to pay attention to.”

Rickards’ could not be more spot on in the media madness. But will he be right again after correctly seeing through polls and forecasting the Brexit vote and the Trump victory?

While the Trump election and French politics are very different, the similarity in media messaging and skeptical polling cannot be ignored.

Could France surprise the world? Could this be the end to the European Union as we know it?