September could prove to be a catalyst for a major market shock. The trigger signs are there and the economic climate is ripe for a major shake up.

As early as April 2016 GOP presidential candidate Donald Trump was belting out that the country is headed for “a very massive recession.”

While Trump is known for the extremes, even some bankers are keeping a nervous eye on the possibility of a recession in the future.  Deutsche Bank officials point toward a yield curve that identifies a 60% chance of recession in the coming months.  Even a Wall Street Journal survey of economists put the probability at 21% (double from last year).

We are in the midst of a historically critical month for markets. As Brian Maher has already noted, “history shows September, not October, is the month to circle.”

The apex of the 2008 financial crisis hit its darkest month in September.  That was when the major home mortgage lenders began to tank and the top Wall Street banks ran to the government for bailouts.

History has a funny way of shining light on where we have been, and guiding where we are headed. For the market, this is especially true.

Here are four indicators to watch on the economic horizon:

With discussion swirling over interest rate hikes in December, something more damming has been let out.

In August, 2016 a report was distributed that noted the Fed’s (FOMC) ability to respond in the event of future recessions that the U.S might face.  The paper was set to be a reassurance of the world’s most powerful bank… It triggered quite the opposite.

The author was David Reifschneider. David is deputy director of research and statistics at the Board of Governors of the Federal Reserve System. As someone who has worked at the Board since in 1982, he has seen his share of bubbles, booms and busts.

Within his pressing analysis the Director wrote, “One cannot rule out the possibility that there could be circumstances in the future in which the ability of the FOMC to provide the desired degree of accommodation using these tools would be strained.”

Translation: They are running out of bullets.

If a rate hike by the Fed is showing confidence in the economy, consider the trigger warning we saw today as an immediate indicator.

A Fed official hinted today in language showing preference toward raising interest rates this month. The market immediately went into panic mode.  The Dow Jones fell more than 250 points and the Nasdaq dropped about 1.5 percent.

Regardless of whether the Fed or the economy is set for an interest rate change, this shows that markets are still on edge.  While interest rates might not change the state of the market, they could prove to be an impetus marker.

As one chief market analyst noted on CNBC, “Voting member Eric Rosengren, historically a dove, repeated his desire (was hawkish two weeks ago) for a rate hike notwithstanding the soft data over the past week.”

He expanded that, “Bottom line, this is important because here we have is a voting member, a dove and someone that is calling for a rate hike even after the recent string of weak economic data.”

Blood is in the water…

Too Big To Fail.

Political voices from both the left and right in U.S politics identified that the “too big to fail” structure was a major threat to our economic system. In 2013, Senators Elizabeth Warren and John McCain were making strides for a bill to break up these colossal banking institutions. Instead of fixing the problem, as is so often the case in Congress, the bill went nowhere.

Since then, the size of these banking institutions has only increased concentration of risk.

Before the 2008 crisis, the five largest banks held 35 percent of all bank assets.  As of now, that figure has jumped in size to 44 percent. It’s all time high.

This is concerning in 2016, and in particular September, because over the past year the US commercial bankruptcy filings jumped from 3% last year to 29%.  This according to the American Bankruptcy Institute, in partnership with Eqip systems. 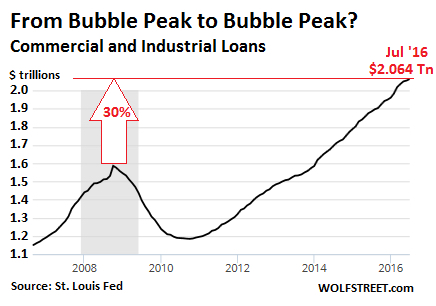 September is also a vital month for Wall Street because it is historically slow month for markets.

It’s not any better across the pond.

Europe is quite literally paying investors to lend their money to companies on behalf of European Central Bank (ECB) monetary policy.

Today, September 9, the Eurogroup (Eurozone finance ministers) assembled in Brussels to discuss the governing of bailouts, financial “haircuts” and deadline criteria that the Greek government must continue to meet.

If this goes par for the course, expect theatrics.  While Greece has conditionally met its prior agreements, the country is in a continued recession.  The unemployment rate in Greece is officially on record at 23.5% as of May – more than double the average in Europe.

With its GDP growth faltering, the Greek government is facing a steep challenge in paying its debts, its European creditors and the range of pensioners on payroll.

Though it is easy to point out Greece as a government that had flawed policy in place, it is not the act of one single country that has put a black cloud over Europe.  The structure of the Eurozone experiment itself was, and continues to be, the core problem.

Europe was once the darling economic and social project of the world. Now, even the likes of Nobel Prize winning economist Joseph Stiglitz is calling it a failure.

While at the London School of Economics in September 2016 he concluded that ““The cost of keeping the Eurozone together probably exceeds the cost of breaking it up.”

At some point, it all will come to an end. As the meetings by the Eurozone continue this September, any sense of quarrel amongst the European leaders could show cracks in the system.  Keeping a firm eye on Greece could give way to what direction the region, collectively, will go.

In presidential election years, the term “October surprise” has been colloquially tossed around.  It references events that are the “silver bullet” in making one campaign and breaking another.

This election, the October surprise might come early. Say hello to September…

David Stockman notes, “September 26th could be a major turning point in this shock. That date is important because it is the first presidential debate. While I don’t know how the debate will turn out, I do think that the outcome could be surprisingly favorable to Trump. If this is the result, the polls could tighten dramatically.”

The markets appear to have bet the house on a Clinton victory in November.  If the first debate receives as many viewers as expected and things veer away from market expectations, expect a negative reaction.  There is one thing markets dislike above all else and that is being wrong.

“If the election gets close and uncertainty is high, the path over the last 30 years in policy could comes into question,” says Stockman.

This debate could send triggers to not only the U.S economy, but the global one as well.

The economy could be pushed toward a crisis by a combination of these factors, or by something else all together.

The future is not unknown, but unknowable — But it is clear this is no typical September. This is no average market.  This is not a usual election.