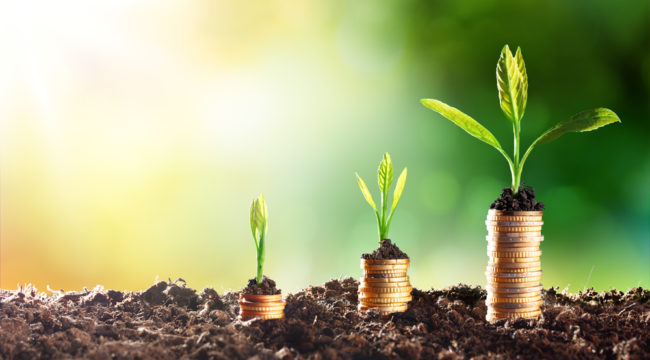 That gain of 4.3% per annumcompounded over 43 years is the highest real GDP growth on record for a continuous equivalent period of time. But here’s the wonder of it…

During that golden age of growth and prosperity, the U.S. had no central bank and not even one episode of fiscal stimulus!

If you allow for population growth from 39 million in 1870 to 97 million by 1913 and look at the U.S. economy on a per capita basis, the gains in those dark days before the invention of “stimulus” were pretty robust.

Real GDP rose from $480 to $1,350 per capita, or at a 2.5% annual rate. That, too, was never again exceeded over a continuous four decade interval. During the most recent 43-year period, for instance, the growth rate of real per capita GDP was only1.6%.And since the eve of the financial crisis at the end of 2007, it has dropped to just 0.3%per annum.

If you aren’t drinking the Wall Street/Washington Cool-Aid that latter figure might cause you to scratch your noggin. Compared to the last 9 years when we have had a tsunami of monetary stimulus, how did we get 8X more per capita growth in real GDP during the 43-year period ending in 1913?

After all, the almighty Fed did not even open its doors for business until the fall of 1914.

Moreover, when you turn to the fiscal front the head-scratching only gets more intense. Uncle Sam actually ran surpluses during 32 of those years, or 75% of the time. And the cumulative surpluses were far greater than the deficits. In fact, the public debt was $2.4 billion in 1870 and only $1.2 billionby 1913.

And sustained inflation was nonexistent during this golden era — it was virtually the same in 1913 as it was in 1870.

Needless to say, the very idea of a 50% cut in the national debt during this Keynesian day and age sounds like it’s from Mars or at least tin foil hat land. When Donald Trump even broached the possibility of sharply reducing today’s crushing public debt, they laughed him out of court.

Still, the numbers cited above, including that dramatic shrinkage of the public debt, come from the Census Bureau’s official Historical Statistics of the United States. So it presumably did happen, but even then there’s more.

When you factor in all those immigrants and the robust growth of the American economy during that period the resulting fiscal metrics are even more stunning.

The public debt dropped from its civil war legacy level of 40% of GDPin 1870 to a mere 3% of GDP by 1913. That’s right. On the eve of obtaining the blessings of a central bank, the public debt of the U.S. relative to GDP was essentially a rounding error of zero.

Likewise, relative to population, the public debt plunged from $62 per capita in 1870 to just $12 for every man, woman and child in the nation in 1913.

Those numbers are so dramatic that they almost seem unreal. But there it is — a 43-year trend during which the central government’s fiscal burden on the U.S. economy was virtually extinguished at the very time that American capitalism was setting an all-time growth record.

I got to thinking about that after my guest appearance Saturday morning on Neil Cavuto’s Fox News show. The topic at hand had been why neither candidate has addressed the nation’s towering $20 trillion debt. Other than the fact that Cavuto is one of the few main street journalists who appreciates the gravity of our debt problem, the main reason I got this opportunity is that the Donald kept delaying his Gettysburg Address — so Fox needed some air time filler.

I pointed out that the public debt stood at $10.6 trillion in January 2009 and that by the time Obama’s successor is sworn in it will total $20 trillion. What that means, of course, is that Barack Obama will have added nearly $10 trillion to the national debt during his tenure.

That nearly matches the total amount of public debt incurred during the first 220 years of the Republic under Obama’s 43 predecessors in the Oval Office.

You would think that fact would be striking enough to trigger a rip-roaring debate during this election season. Back in 1980, for example, a relentless attack on Jimmy Carter’s “out of control” public debt — then approaching a mere $1 trillion — was a daily staple of Ronald Reagan’s campaign speeches.

By 2016, however, we have ended up in such a Bizarro World that Obama is taking bows for taming the Federal deficit and Hillary harrumphs loudly that her plan will not add a single dime to the national debt. At least Neil Cavuto gave me the time eviscerate those giant lies — and it didn’t take much.

The deficit came in a $587 billionin FY 2106 which ended in September, and that was up by 35% from the $439 billionof prior year. But actually the case is far worse because the Obama deficits are being subjected to the same “BleachBit” treatment as Hillary’s emails.

That is, hundreds of billions are being added to the public debt each year which are being erased from the official deficit number due to the peculiarities of government accounting.

For instance, during the last two years nearly $200 billion was borrowed by Uncle Sam to fund student loans, but that didn’t count in the official deficit because these outlays are considered “investments”, not spending. You would think Washington was still selling swampland on the Potomac, but that’s already all occupied — especially by the Pentagon.

In any event, when you add more than a dozen like and similar gimmicks and the inherent accounting double-shuffle of borrowing from the social security trust funds — which are actually already insolvent on both an actuarial basis and cash basis — the full extend of the beltway fiscal scam becomes apparent.

The combined official deficit for FY 2015 and 2016 was $1.025 trillion. But the public debt rose by $1.7 trillionduring that period, meaning that upwards of $700 billion of red ink didn’t get counted in the deficit.  So Obama sounded like he was crowing about taming the deficit monster, when, in fact, he was just lying as per usual.

After all, by the end of the current quarter we will have hit month #90 of this so-called business expansion — compared to a post-1950 average of just 61 months. So when the average level of red ink at this late stage of the business cycle is $850 billion annually — as it was in FY 2015-16 — you have tamed nothing at all.

Still, Hillary’s claims are even more risible. During the last debate she attempted to posture herself as the fiscally prudent one of the two candidates, claiming that all of her new “free stuff” such as no tuition for most college students, social security increases for lower income retirees and Medicare at 50 years of age would not “add a dime to the debt” because it will all be funded by new taxes on the rich.

But. she neglected to say — conveniently — that the dime she won’t add is on top of themassive debt increases that are already built-inunder current entitlements, debt service and Washington’s hawkish defense policy, which she fully embraces.

In fact, even by the lights of CBO’s “rosy scenario” economic assumptions, current law budget policy will add $10 trillion to the public debt over the next decade. And that assumes we go 207 monthswithout a recession or nearly twice the longest on record!

The truth is, under a real world economic forecast — that is, simply a replay of the growth and jobs performance of the last 10 years — the built in Federal deficit will total $15 trillionduring the next 10 years. That means the public debt will reach$35 trillion by the middle of the next decade, or 145% of GDP.

So, when Hillary claims she will not add a dime to the public debt, she is apparently blaming the $35 trillion now in the pipeline on her 44 predecessors.