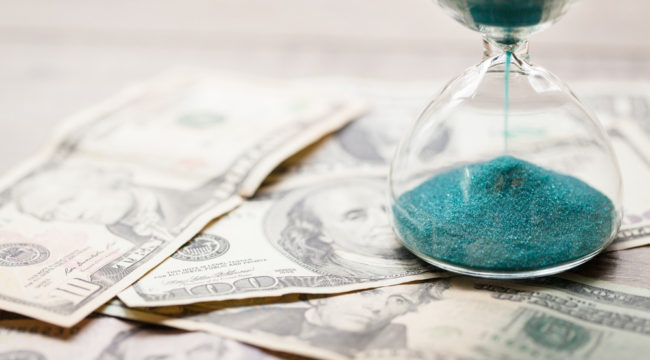 The Fed’s Race Against Time

The Federal Reserve races against time…

Since its first halting step off the zero bound in December 2015, the Fed has lifted the fed funds rate to a “so far so good” 1.25%.

Historically, it takes 300–400 basis points of rate cuts (3–4%) to steer the U.S. economy out of recession. Fed policy today can be understood as a desperate race to get the fed funds rate to 3.5% before the next recession hits without actually causing a recession in the process.

Assuming the usual 0.25% bump per hike, that means nine additional rate hikes before the business is done.

But will recession arrive first?

But inflation was running at only 0.65% in December 2015 when the Fed began its rate hike cycle.

And since nicking 2.80% this February, the consumer price index (CPI) has plummeted to a sparkless 1.73% at last reading (July).

After peaking at 2.26% in January, core CPI — CPI minus the more variable food and gas components — has also dimmed to a faint 1.70%.

Only a supreme effort of the imagination — likely a madman’s or a central banker’s imagination — could construe the foregoing as “inflation.”

The Fed has constantly cited 2% inflation as its target for increasing interest rates. However, it is very clear that inflation is not only below 2% on headline CPI and core CPI but is sharply moving in the wrong direction.

Meantime, yield on the bellwether 10-year Treasury note has fallen to 2.13% — its lowest handle since Nov. 9.

Nor does it spot the thrusting green shoots of growth — unlike the Fed-drunk stock market.

The 10-year Treasury bond yield has fallen from 2.4% in mid-May to 2.13% today. Falling yields suggest weakening growth or possibly recession ahead…

Here we have a sketch of slackened growth and falling prices… of an economy in danger of slipping into recession.

We thus find Janet Yellen hung on the hooks of a giant dilemma.

Any more tightening could easily tip the economy into recession — if the Fed’s previous tightening hasn’t already.

Consider that 10 of the last 13 tightening cycles have ended in recession.

But how can the Fed stock up for recession if it can’t get past 1.25%?

Meantime, the U.S. economy enters its 99th consecutive month without a recession — the third-longest stretch in history.

How long can Lady Fortune smile?

By digging the foundations of negative interest rates:

Enabling effective negative rate policy is also much cleaner and more elegant than the second-best policy of raising inflation targets.

Translation: Negative interest rates are the royal road to recovery. But they’re not possible as long as people can withdraw their cash from banks.

Bitter medicine, by our lights. No — wrong medicine.

But it is nonetheless the medicine on offer.

So… when the inevitable recession arrives, will America be next?