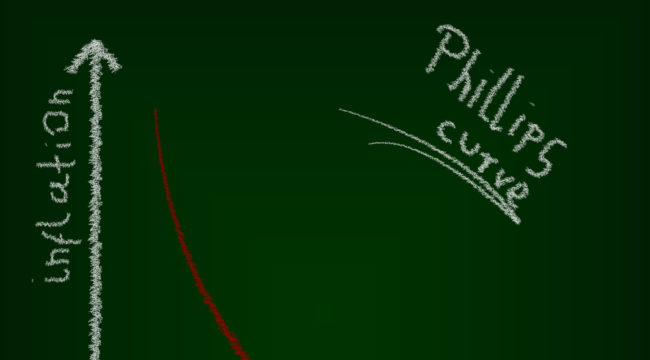 Why the Fed Will Fail Once Again

[Ed. Note: Jim Rickards’ latest New York Times bestseller, The Road to Ruin: The Global Elites’ Secret Plan for the Next Financial Crisis, is out now. Learn how to get your free copy – HERE. This vital book transcends rhetoric from the Federal Reserve to prepare you for what you should be watching now.]

John Maynard Keynes once wrote, “Practical men who believe themselves to be quite exempt from any intellectual influence, are usually the slaves of some defunct economist.”

Truer words were never spoken, although if you updated Keynes today, the quote would begin with “practical women” to take account of Fed Chair Janet Yellen. The “defunct economist” in question would be William Phillips, inventor of the Phillips curve, who died in 1975.

In its simplest form, the Phillips curve is a single-equation model that describes an inverse relationship between inflation and unemployment. As unemployment declines, inflation goes up, and vice versa. The equation was put forward in an academic paper in 1958 and was considered a useful guide to policy in the 1960s and early 1970s.

By the mid-1970s the Phillips curve broke down. The U.S. had high unemployment and high inflation at the same time, something called “stagflation.” Milton Friedman advanced the idea that the Phillips curve could only be valid in the short run because inflation in the long run is always determined by money supply.

Economists began to tweak the original equation to add factors — some of which were not empirical at all but model-based. It became a mess of models based on models, none of which bore any particular relationship to reality. By the early 1980s, the Phillips curve was no longer taken seriously even by academics and seemed buried once and for all. RIP.

But like a zombie from The Walking Dead, the Phillips curve is baaaack!

And the person who has done the most to revive it is none other than Janet Yellen, the 70-year-old liberal labor economist who also happens to be chair of the Federal Reserve.

Unemployment in the U.S. today is 4.3%, the lowest rate since the early 2000s. Yellen assumes this must result in inflation as scarce labor demands a pay raise and the economy pushes up against the limits of real growth. Yellen also agrees with Friedman that monetary policy works with a lag.

If you believe that inflation is coming soon and that policy works with a lag, you better raise interest rates now to keep the inflation from getting out of control. That’s exactly what Yellen and her colleagues have been doing.

Meanwhile, back in the real world, all signs point not to inflation but to deflation. Oil prices are declining, intermediate-term interest rates are falling, labor force participation is falling, demographics favor saving over spending and logistics and supply-chain giants like Wal-Mart and Amazon are relentlessly squashing price increases wherever they appear.

Even traditional high-price sectors like college tuition and health care have been cooling off lately.

Yellen and a small group of Fed insiders, including Bill Dudley and Stan Fischer, are keeping up the drumbeat for more rate hikes later this year. Opposition to more rate hikes among Fed officials is growing, including from Neel Kashkari, Lael Brainard and Charles Evans.

This intellectual tug of war is coming to a head.

First, bonds are rallying because the bond market expects a recession or slowdown due to unnecessary tightening by the Fed. Which brings me to Bill Gross…

Practically every investor has heard of Bill Gross. For decades he was the head of PIMCO and ran the world’s largest bond fund. His specialty was U.S. Treasury debt..

PIMCO was always a “bigfoot” in the bond marketplace. In the 1980s and 1990s, I was chief credit officer at a major U.S. Treasury bond dealer, one of the so-called “primary dealers” who get to trade directly with the Federal Reserve open market operations trading desk.

PIMCO had dedicated lines and a dedicated sales team at our firm. When they called to buy or sell, it would move markets. Every primary dealer wanted to be the first firm to get the call.

Gross is famous for outperforming major bond indices by a wide margin. The way to do that is market timing. If you sell bonds just ahead of a rising rate environment, and buy them back when the Fed is ready to reverse course you not only capture most of the coupon and par value at maturity, you can book huge capital gains besides.

Now Gross has issued one of his most stark warnings yet. He says that market risk levels today are higher than any time since just before the 2008 panic. We all know what happened then. Gross says it could happen again, and soon.

No one reads the market better than Bill Gross. So, when he issues a warning, investors are wise to pay attention.

The stock market is giving a different signal. Stocks are rallying because markets interpret Fed rate hikes as a signal that the economy is getting stronger.

Both markets cannot be right. Either stocks or bonds will crash in the weeks ahead.

Gold is watching and waiting, moving down on deflation fears and then up again on the view that the Fed will have to reverse course once the economy cools down.

My models show that bonds, Bill Gross and gold have it right and that stocks are heading for a fall.

The stock market correction won’t come right away, because the Fed is still in a mode to talk up rate hikes and strong growth and to dismiss disinflation as “transitory.”

Today it released its latest growth forecast, which remains unchanged from its June 15 reading — 2.9%.

Something is slowing down the economy, and that something is Fed rate hikes.

That’s even weaker than the historically weak 2.0% growth of the current expansion since June 2009. This is not the stuff of which inflation is made.

The Fed’s bungling should come as no surprise.

The Federal Reserve has done almost nothing right for at least the past twenty years, if not longer. The Fed organized a bailout of Long-Term Capital Management in 1998, which arguably should have been allowed to fail (with a Lehman failure right behind) as a cautionary tale for Wall Street.

Instead the bubbles got bigger, leading to a more catastrophic collapse in 2008. Greenspan kept rates too low for too long from 2002-2006, which led to the housing bubble and collapse.

Bernanke conducted an “experiment” (his word) in quantitative easing from 2008-2013, which did not produce expected growth, but did produce new asset bubbles in stocks and emerging markets debt.

Yellen is now raising rates in a weak economy, which should produce the same recessionary reaction as 1937, the last time the Fed raised into weakness.

Why this trail of blunders?

The answer is that the Fed is using obsolete and defective models such as the Phillips Curve and the so-called “wealth effect” to guide policy. None of this is new; I’ve been saying it for years in books, interviews and speeches.

What is new is that even the mainstream media is beginning to see things the same way. Fed leaders have been exposed as charlatans, like the Professor in the Wizard of Oz.

The Fed’s latest failure will cause policy to shift to ease before September in the form of forward guidance on no further rate hikes this year. Just one more failure in a long list.

It’s time to load up on Treasury notes, gold and cash and lighten up on stocks. The Fed may be the last to learn about deflation, but when they do, the policy response could be instantaneous and markets could suffer whiplash.

That’s what happens when zombies are on the loose.