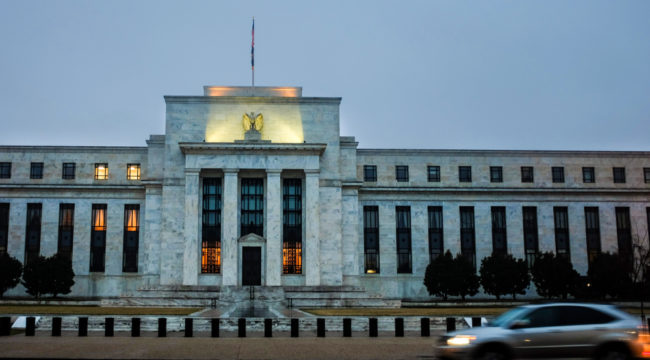 The Fed Has Robbed the Future

Has the future finally arrived?

The Federal Reserve intervened massively to cage the menace of depression after the 2008 financial crisis.

The crisis has passed. And the economy is presently in its 108th month of recovery.

Yes, the central bank may have saved the present with its emergency medicine.

But it may have robbed the future along the way…

Interest rates would have likely soared following the financial crisis.

Many businesses dependent on cheap debt and low interest rates would have died the death.

But the pain — though acute — would have likely been brief.

Sound business would have survived.

Higher interest rates would have encouraged savings… and gradually rebuilt the capital stock.

From this capital stock the green shoots of future growth would have come thrusting.

But it wasn’t to be.

Rather than letting the fire clear the underbrush… the Federal Reserve intervened to save the deadwood.

The Bank for International Settlements estimates that 10% of current American corporations are “zombies.”

That is, they could not endure without ultra-low interest rates and cheap financing.

How many future redwoods never came into being because these zombies robbed their nutrients?

They bring tomorrow’s consumption ahead to today, that is.

And they rob the saplings that promise tomorrow’s growth.

Despite the Fed’s lovely fling at the printing press, GDP has only grown an average 2.16% since 2010.

Meantime, Bloomberg informs us that labor productivity has averaged a mere 0.7% annual growth since 2011.

Is this a picture of health?

“There’s nothing to suggest a dramatic pickup in output per worker (hence, limited upside for GDP growth).”

Then we come to the financial shell games corporations play to goose short-term stock prices.

Twenty years ago, companies invested $4 to expand their businesses to every $1 on dividends and buybacks.

Bloomberg reports that 56% of corporate profits are presently put in the service of buybacks.

And encouraged by tax cuts, this year’s pace of buybacks may be 50% greater than last year’s.

Apple, for example, has recently announced a vast $100 billion buyback to prop its shares.

If companies do indeed start investing more, then maybe productivity will rise and we can break out of these doldrums for good. But right now, it just isn’t happening.

For the larger perspective, we turn once again to Mr. Smith:

The reality nobody dares acknowledge is that a “recovery” based not on improving productivity and innovation but on cheap credit and an artificially stimulated “wealth effect” was inherently weak, for the stimulus effectively hollowed out the productive economy in favor of the financialized, speculative economy and created perverse incentives to overborrow and overspend, stripping future demand to create the illusion of growth in a stagnating economy…

Meantime, years of nearly zero interest rates have reduced the U.S. personal saving rate to 3.1% — miles below the 8.2% average since 1959. 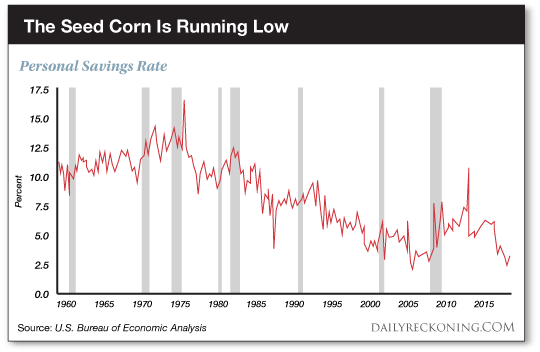 But growth is just around the next bend, the experts continually assure us.

Once this policy kicks in, once that condition is in place, all will be rosy.

But they’ve been caroling the same sweet tune for years… and it’s always turned sour in the end.

How many times have the wiseacres had to revise their GDP forecasts lower once fresh data rolled in?

Why should it change now… especially when history says the economic recovery is so “long in the tooth”?

“A funny thing happens when you borrow from the future to spend more today,” Smith concludes…

The future arrives, and we find the pool has been drained to serve the absurd policy goal of “no recession now, or ever again.”

Maybe the simple reality is this:

After years of borrowing from the future to spend more today, that future has finally arrived…

And the pool is empty.