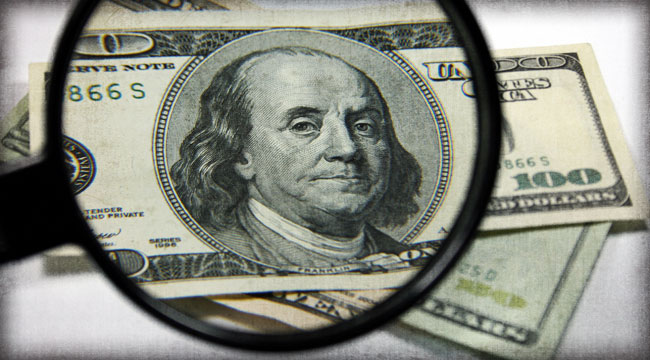 The game of speculation is the most uniformly fascinating game in the world. But it is not a game for the stupid, the mentally lazy, the person of inferior emotional balance or the get-rich-quick adventurer. They will die poor. – Jesse Livermore, How to Trade in Stocks

The trouble with capitalism’s guardians is that they have no respect for it.

Markets have been around for at least 2,000 years. Since then they have evolved in many directions, with fancy and sophisticated techniques… and elaborate systems and complicated instruments that take a PhD to understand.

There is still no formula for predicting market movements. And even the smartest and most experienced traders often wash up.

But despite all the brain power put into trying to figure them out, markets still surprise, confound and puzzle everyone. There is still no formula for predicting market movements. And even the smartest and most experienced traders often wash up.

You’d think Janet Yellen and other central bankers would take a step back and stand in awe. Like astronomers looking at the heavens, they should be studying its black holes and its exploding supernovae. Or at least looking for signs of intelligent life.

Instead, Yellen et al ignore the intricate mechanisms that balance supply and demand; they want to force people to demand more. They have no interest in discovering prices; they want to impose their own prices. And they could care less what Mr. Market has to say; they only hear their own voices.

More guards than guardians, they believe they can improve the markets… control them… whip them into shape… and force them to do their bidding.

The gods must be rolling in the aisles.

“No need to lift rates to curb risk, says Yellen” is how the Financial Times reported her position last week.

Someone must have told her that prices of houses, art, bonds, stocks and other assets are all getting closer to bubbledom.

At the top end, mansions are once again setting records. Paintings of no obvious interest are fetching millions of dollars at auction. And U.S. stocks are at levels never before seen.

Meanwhile, debt levels are higher than in 2007, with U.S. corporations borrowing record amounts — far in excess of profit growth.

Alan Greenspan claimed he wouldn’t know a bubble if it exploded in his face. Instead, once the damage was done, he and his colleagues would get to work performing their customary miracles.

Yellen is not even looking for bubbles. She thinks she and the other guards can implement some “macro-prudential policies” that will take the risk out of them. So bubbles won’t matter.

This is the same woman who was on the job as president of the San Francisco Fed when the last bubble blew up six years ago.

She saw nothing coming. She heard nothing. She learned nothing. She has no idea how markets operate. But she is sure she can manage them and make them more “resilient.”

Heaven and hell are full of people who thought they could take the risk out of markets. Some went broke. Some blew their brains out. Some, such as Jesse Livermore, did both.

Livermore made fortunes… and lost them. He lost his first fortune to cotton trading in 1907. In 1929, he breezed through the panic, apparently without losses. Later, his money slipped through his hands, in a way that has never been fully understood.

Whatever your weakness, Mr. Market will find it. He will encourage you to dig yourself in deeper and deeper… Then he will fill the hole!

Investors still have confidence in Madam Yellen… But they will turn against her, sooner or later.

Investors will take the other side of your trade. They will find the frailty… the flaw… the fine little fracture in your theory.

Now, the Wall Street Journal reports that traders are doing well by trading Fed policy announcements. They buy stocks the day before an announcement and sell them a week later, buying them again the following week.

The system is crazy from a fundamentals point of view. Companies do not become more and less valuable because of Fed announcements.

But it works! A portfolio managed this way would have returned 650% since 1994. The S&P 500 returned only about half that.

Investors still have confidence in Madam Yellen. They buy stocks and bonds, sure she will push them higher.

But they will turn against her, sooner or later. They will begin selling her favorite assets… and, if she is still at her post, they will ruin her.

Ed. Note: No matter who’s in charge, the Fed will always try to “save the economy”… and end up making things worse in the process. And if you don’t take steps to preserve your wealth, you could have nothing left by the time it’s all over. Don’t let that happen. Sign up for the FREE Laissez Faire Today email edition for your chance to discover actionable ways to protect and even grow your wealth no matter what the idiots in Washington do to “fix” the economy.