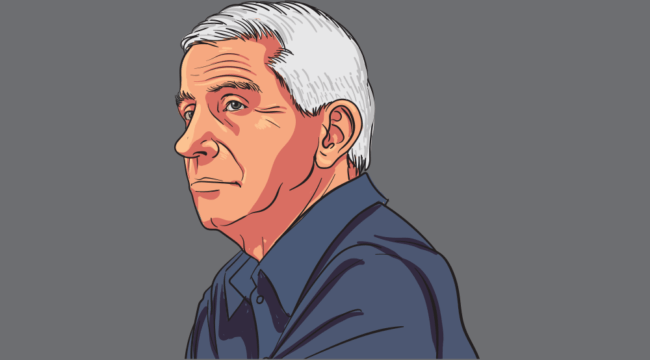 Tomorrow, Joe Biden is expected to address the nation about the new Omicron variant of the virus.

An aide claims the administration is “prepared for the rising case levels” and that Biden will explain how it “will respond to this challenge.”

The good news is that it doesn’t appear to be particularly dangerous. Symptoms are generally described as those of a mild cold. But you can expect Biden to dial up the fear tomorrow.

He’s probably going to try to shame the unvaccinated and warn about a “dark winter” ahead because of their refusal to take the jabs. For the fully vaccinated, he’s going to tell them to get the booster.

We’ll have to see what else he has in store, but you can be sure it won’t involve telling everyone to take hydroxychloroquine or ivermectin if they start showing symptoms.

It was always expected that the Pfizer, Moderna and AstraZeneca COVID vaccines would be two-dose treatments. (That’s not true of Johnson & Johnson’s Janssen vaccine, which was always a one-dose regimen. Janssen’s is the only vaccine that relies on a more traditional adenovirus rather than mRNA technology to instruct your cells to create the toxic spike protein.)

The vaccines were initially reported to be highly effective at reducing severe symptoms and deaths. This was despite some serious side effects that have not been fully reported and are still being evaluated.

The likely number of vaccine-induced deaths exceeds 20,000, based on the VAERS reporting system. We don’t know the true number because there’s no definitive evidence that the vaccine caused the death, but the spike in reported deaths since the vaccines came out is off the charts. It’s not proof of a fire, but there’s lots of smoke.

Meanwhile, all of the vaccines were falsely presented to the public as preventing infection. But that was untrue. The vaccines do not prevent infection or spread of the virus.

Still, public health officials went on a full-court press to achieve 100% vaccination rates regardless of side effects, religious objections, medical objections based on asthma and other conditions and regardless of the natural immunity already acquired by over 50 million Americans who have had the disease and recovered.

Besides, the vaccines do not appear to be effective at preventing infections from the Omicron variant. The fully vaccinated and the boosted can still get sick.

Vaccine mandates were enforced through a large number of drastic outcomes for the unvaccinated. You could lose your job; lose a government contract; be denied international travel; be discharged from the military; and be denied access to restaurants, sports venues and concerts among other activities if you did not get vaccinated.

The unvaccinated were treated like lepers with the result that many got vaccinated against their better judgment solely to avoid the harsh treatment otherwise reserved for them. The only consolation was that once you were vaccinated and had your paperwork in order (and ready to present to the vax enforcers), you could go about your business when it came to work, travel or leisure.

But wait, not so fast. The petty government dictators who invented these rules in the first place are now moving the goalposts. Not only do the vaccines not stop infection, but they don’t even do their job of reducing symptoms after about six months.

Naturally, Dr. Anthony Fauci is saying that it’s just a matter of time before the definition of “fully vaccinated” is changed to require three shots instead of two (or two for Janssen instead of one).

The implications of this are enormous. It means that those who thought they had put the vaccination issue behind them will have to get in line for another shot if they want to go about their business without discrimination. The supposedly vaccinated will find themselves back in the leper colony with the unvaccinated if they don’t get the new booster.

Of course, the booster will wear off after six months also. (It’s called a “booster” but it’s the same vaccine as the first shot.) And that means you will have to get boosters for the rest of your life to comply with Dr. Fauci’s dictatorship.

Vaccines should be allowed as a matter of choice but vaccine mandates are mostly illegal (per recent court rulings) and counterproductive in the sense that they encourage resistance, not compliance.

Though it’s not proven, mass vaccination could also be causing new variants because it forces the virus to evolve. A better strategy would likely involve targeted vaccination for the most vulnerable, with therapeutics for everyone else.

That would reduce the pressure on the virus to mutate while giving natural immunity to the people who were treated early and recovered. And studies indicate natural immunity is up to 27 times more powerful than vaccine-induced immunity.

Back to the Same Failed Playbook

In the meantime, expect more damage to the economy as resources are wasted in a vain attempt to achieve Zero COVID. Politicians and the bureaucrats who guide them keep reaching for the same playbook, even though the plays didn’t work the first time.

Mask mandates, lockdowns, school closings, vaccine mandates and other dictates did nothing to help.

The evidence is clear that masks don’t work. Lockdowns turned homes into COVID incubators. The better approach was to encourage people to be outside without masks, getting exercise and fresh air.

School closures deprived children of a year of education and the socialization skills that come with it.

Will this end anytime soon? In some free states like Florida and New Hampshire (where I live), most of the madness has ended already. But in neo-fascist states like Michigan, Oregon and Washington, the madness continues.

For example, the state of Oregon already had a mask mandate. However, it was issued under rules that make it temporary. This means that the deadline had to be extended from time to time, which requires public notice and possibly hearings.

In order to avoid these requirements, Oregon began a process to make the mask mandate permanent. When asked to explain the new policy, the medical director for communicable diseases of the Oregon Health Authority, Dr. Paul Cieslak, defended the decision by saying, “Permanent … doesn’t necessarily mean permanent.”

George Orwell must be smiling somewhere at that perfect illustration of Newspeak. It’s amazing how supposedly temporary measures can become permanent.

Meanwhile, Fauci was asked on a weekend talk show if we’re ever going to reach a point where we won’t need to wear masks on airplanes. Fauci replied, “I don’t think so.” So you’re always going to need to wear a mask on a plane regardless of the circumstances if Fauci has his way.

Here’s another bit of madness: Three months ago an FDA advisory committee voted overwhelmingly, 16–2, against booster shots for the general public. But three months later, colleges are actually mandating boosters for the upcoming spring semester.

What happened to “the science”?

Americans Are Fighting Back

The American people are increasingly fed up with these contradictory, destructive and non-scientific mandates from the neo-fascist bureaucrats who are mainly pursuing their own agendas.

The real solution to the pandemic consists of mutations that attenuate the virus, herd immunity, better treatments, fresh air and exercise. Fauci’s dream of making everyone a vax slave will not last. His failure will require resistance by the general population.

That resistance is already taking place. Fauci is conflicted, incompetent and insecure. Moving the goalposts on vaccination is making that clear to the public. He will be deposed and vaccination will be made voluntary, but not yet.

In the meantime, expect the madness to continue.