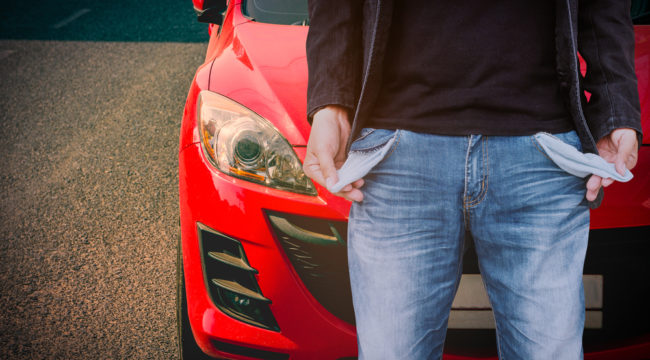 The Fast Track to “Carmageddon”

Back in the 1950s when GM had 50% of the auto market they always said that, “As General Motors goes, so goes the nation.”

That was obviously a tribute to GM’s economic muscle and its role as the driver of growth and rising living standards in post-war America’s booming economy. Those days are long gone for both GM and the nation. GM’s drastically reduced 20% market share of U.S. light vehicle sales in June was still an economic harbinger, albeit of a different sort.

GM offered a record $4,361 of cash incentives during June. That was up 7% from last year and represented 12% of its average selling price of $35,650 per vehicle, also a record. But what it had to show for this muscular marketing effort was a 5% decline in year-over-year sales and soaring inventories. The latter was up 46% from last June.

My purpose is not to lament GM’s ragged estate, but to note that it — along with the entire auto industry — has become a ward of the Fed’s debt-fueled false prosperity. The June auto sales reports make that absolutely clear.

In a word, consumers spent the month “renting” new rides on more favorable terms than ever before. But that couldn’t stop the slide of vehicle “sales” from its 2016 peak.

In fact, June represented the 6th straight month of year-over-year decline. And the fall-off was nearly universal — with FiatChrysler down 7.4%, Ford and GM off about 5% and Hyundai down by 19.3%.

The evident rollover of U.S. auto sales is a very big deal because the exuberant auto rebound from the Great Recession lows during the last six years has been a major contributor to the weak recovery of overall GDP.

In fact, overall industrial production is actually no higher today than it was in the fall of 2007. That means there has been zero growth in the aggregate industrial economy for a full decade.

Real production in most sectors of the U.S. economy has actually shrunk considerably, but has been partially offset by a 15% gain in auto production from the prior peak, and a 130% gain from the early 2010 bottom.

By comparison, the index for consumer goods excluding autos is still 7% below its late 2007 level.

So if the so-called “recovery” loses its automotive turbo-charger, where will the growth come from?

These industrial production figures powerfully underscore the extent to which the weak expansion of real sales and GDP over the past seven years has been artificially supported by an energetic but unsustainable snapback in the auto sector. The soft June auto sales report further underscores that this happy booster shot is now over. Its opposite — Carmageddon — is metastasizing rapidly.

Still, booming economic growth is exactly what is priced into the still soaring stock market averages. But the Carmageddon story is evidence of the rot which lies beneath today’s mutant economy and lunatic financial bubbles.

So how did U.S. households afford to buy their new rides when their incomes have lagged the purchase price of a new car by nearly one-third over the last two decades? They didn’t. Financing for the average new vehicle during June amounted to $30,945 or 97.6% of the average purchase price.

That’s up 29% from the great recession lows and shows quite dramatically how the Fed’s Bubble Finance actually works. Namely, it has permitted the U.S. economy to borrow its way into an auto boom based on the rising collateral value of autos, not a commensurate gain in earned income and sustainable purchasing power of U.S. households. 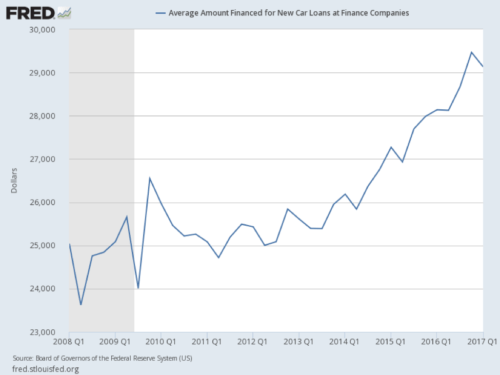 In fact, since about 85% of new cars are financed, means households are taking out cash to finance transaction fees, pay-off underwater loans on trade-ins or take a joy-trip in their new ride.

Needless to say, borrowing more than the price tag of a new car and financing it over a record 69.3 months amounts to still another version of Ponzi finance. That’s especially true in this instance because unlike homes during the subprime mortgage mania, it is evident even now — before the real car loan bust — that autos depreciate rapidly, and far more rapidly than debt is reduced under current typical loans.

So the repo man will be immensely busy in the years ahead, and that will have its own harmful economic effects. And it also needs be pointed out that auto loans are essentially supported by the collateral value of the vehicle rather than the income and credit worthiness of the borrower.

As the tide of soured auto loans rises, there will be more and more horror stories about wages being garnished and other court-imposed extractions from the hard-pressed households which were sucked into the auto finance Ponzi, and at length defaulted.

So the Fed may crow about a recovery that has been the weakest in modern history, but it is only a statistical paint-by-the-numbers upturn. It was purchased at the cost of burying U.S. households in levels of auto debt that were heretofore inconceivable, and which, in any event, are surely unsustainable.

The truth of the matter is that the Fed has just caused the pea to be shuffled under a different shell. Thus, Yellen and her posse continue to dismiss the threat of bad debt based on the purported success of “prudential regulation” and the improvement of bank balance sheets and the home mortgage market.

In fact, household debt has just been shoved into the auto file. At the peak of the mortgage boom in 2008 there were 98 million mortgage loans (including second mortgages and home equity lines) outstanding compared to 88 million auto loans.

The latter has now soared to 108 million car loans — an off-the-charts record level that now exceeds the number of mortgage loans outstanding by 35%. 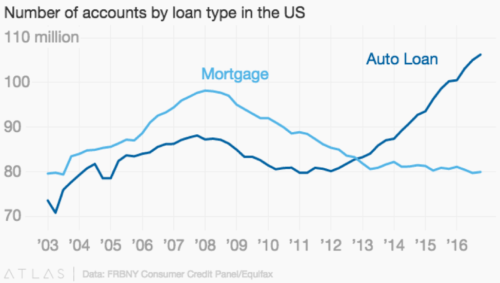 It goes without saying that to generate 108 million auto loans, any consumer who could fog a rearview mirror had to be admitted into the auto finance game. Accordingly, subprime auto debt is now at an all-time high — notwithstanding the overwhelming evidence from the financial crisis that much of this debt will become delinquent or default when either payroll checks falter or used car prices tumble — leaving car loans hopelessly underwater.

The latter point is crucial and underscores why this time the auto debt contraction cycle will be far worse than 2008-2009. That’s because nearly one-third of vehicle trade-ins are now carrying negative equity.

This means, in turn, that prospective new-car buyers are having to stump-up increasing amounts of cash to pay off old loans, thereby pressuring volume-hungry lenders and dealers to extend loan-to-value ratios to even more absurd heights than the 120% level now prevalent.

That’s kicking the metal down the road with a vengeance!

At the end of the day, the precarious nature of the debt pyramid that underlies the auto market cannot be gainsaid. It belies the illusory debt-fueled prosperity of the auto sector, and, instead, underscores how consumers are being led even deeper into the Fed’s colossal debt trap.

That’s why GM’s June results were truly a harbinger. Even the Fed’s own surveys show that the household sector is tapped out on the auto credit front, and that auto loan demand has turned negative for the first time since the 2008-2009 collapse.

Current paychecks are still barely keeping up with inflation — especially as reflected in the cost of food, energy, medical and housing. Needless to say, if employment growth falters during the inexorable recession just ahead, the Fed’s debt-o-topia will come full circle.

After rebounding during the past two years at a rate between 5% and 6.8% year-over-year, even credit cards are again tapped out.

With balances now exceeding $1 trillion, they are back to the unsustainable level of May 2008 just before they blew up during the Great Recession.

So why are the casino gamblers still buying the dips?

Because that’s “what’s working”… until it doesn’t.