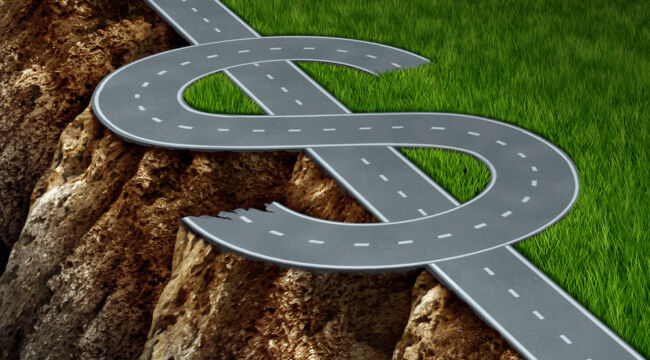 What matters is that the nation is falling into the abyss that’s opened between Wall Street and Main Street.

And nothing will stave off the collapse of the social order other than a fundamental re-ordering of the way we create and distribute money and political power, as money buys political influence.

The last economic tide with widespread benefits to Main Street was 30 years ago. Since then, the Federal Reserve and other central banks have incentivized globalization and financialization, two dynamics that favor mobile capital and financier skims and scams.

There are a number of factors behind the widening canyon of economic inequality, but the primary driver is financialization.

Financialization has given those with access to central bank credit ways to skim great wealth from the system without creating any value whatsoever.

Leveraging phantom collateral is another feature of financialization. Commoners were allowed a taste of this when subprime lenders were offering no-document, no-down payment mortgages back in 2004-2007.

Phantom income was posted as collateral for the nothing-but-leverage loan.

Financialization is not about investing in productive enterprises; it’s all about skimming wealth while providing no value to the real economy or society.

The hidden toxin in financialization is the resulting concentration of wealth can buy concentrations of political power.

Financialization is thus self-perpetuating: once the skimming operations generate billions of dollars in profit, it only takes a relatively small piece of these profits to buy/influence the political class.

Once the politicos are in your pocket, the regulators and judiciary fall into line or are marginalized by new statutes or gutted budgets.

Financialization is the disease eating away what’s left of democracy.

Financialization is the exploitation of assets/income that were previously safe from predation by central bank funded financiers. While definitions vary, mine is:

Financialization is the commoditization of debt collaterized by previously unsecuritized assets, a pyramiding of risk and speculation that is only possible in a massive expansion of low-cost credit and leverage for those at the top of the wealth-power pyramid: financiers, banks and corporations.

One example is the student loan “industry,” which prior to financialization did not exist. A previously safe from predation asset/source of income — college degrees — has been securitized so that loans issued to students for largely worthless diplomas can be sold globally as “secure assets with guaranteed yields.”

That the unknowing class of students have little to no income and no guarantee of income doesn’t matter. What matters is a previously unexploited asset can be turned into debt that can be sold at an immense profit.

And so student loan debt has skyrocketed from near-zero to $1.6 trillion in less than a generation.

This rapacious, ruthless exploitation would not have been possible without the central bank (Federal Reserve) and federal government enabling and enforcing the supremacy of the higher-education cartel. 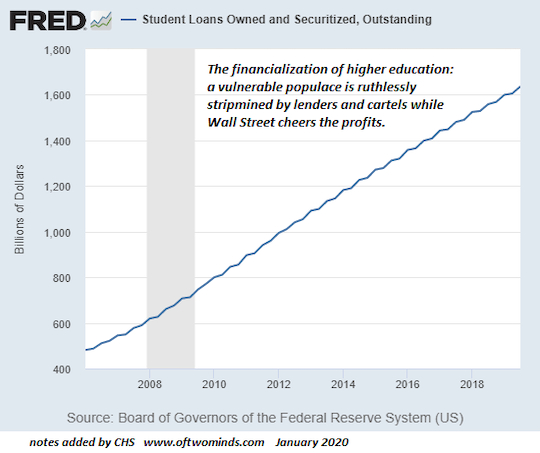 Globalization and financialization have been the two engines of soaring wealth inequality.

Globalization can mean many things, but its beating heart is taking advantage of cheap overseas labor and skirting the environmental and tax costs of doing business in the developed nations.

In other words, globalization is the result of those at the top of the wealth-power pyramid shifting borrowed capital around the world to exploit lower costs of labor, commodities, environmental regulations and taxes.

This manifests as offshoring of jobs, the stripmining of forests, minerals, etc., the degradation of local ecosystems, the decline of tax revenues derived from capital and the explosive rise in stock market valuations as wages stagnate or decline.

A key element in globalization is the transfer of risk from the owners of capital to the workers and public resources.

Examples of this transfer of risk abound: rather than pay workers benefits, corporations game part-time/full-time labor laws so workers’ health insurance is paid by taxpayers (Medicaid).

Corporations pay wages too low to survive so workers depend on public-sector assistance (food stamps, etc.).

Alas, all good predations end when the prey has been dragged to the ground and consumed.

All the fruit of financialization and globalization have been plucked by the powerful, and now both the engines of “growth” are sputtering as the hollowed-out Main Street economy implodes.

Central bank free money for financiers doesn’t create collateral or creditworthy borrowers, and without those foundations, the decayed, rotted shack of debt will collapse.

If we set aside the proximate causes of social disorder, we discern the salient cause: the socio-economic political system no longer works for anyone but those skimming wealth from globalization and financialization.

Main Street has been in slow-motion collapse for a generation. But this terminal decay was masked by hyper-financialization and debt-fueled spending by consumers who became accustomed to filling the widening gap between their income (stagnant) and the costs of their lifestyle (rising), as they chased the top 5% who benefited from globalization and financialization.

Debt creates the warm and fuzzy illusion of wealth, but at a cost: debt payments never disappear, but income and profits can slide effortlessly to zero.

The relentless rise of Wall Street is constantly presented as “proof” the status quo is “creating wealth” and is enormously successful.

It’s impossible to reconcile this claim with the decay and collapse visible in Main Street, and so people lash out at whatever they can identify as the proximate cause of their suffering and poor prospects.

Ask yourself these questions: What kind of system will we get if the vast majority of the trillions created out of thin air by central banks goes to financiers and corporations?

What kind of system will we get if these financiers and corporations use some of this free money to buy political influence?

What kind of system will we get if the really big money is skimmed by financial games that generate no goods or services, no jobs, and no productivity — in essence, they are completely worthless to the real economy and society?

What kind of system will we get if the stock market bubble is touted as “proof” the system is working splendidly and wealth is bubbling up without any limit thanks to the Fed’s magic money machine?

The answer is a system that’s crazy-making and doomed by its internal contradictions.

The Fed can create dollars out of thin air and sluice it to the super-wealthy to feed their skims and scams, but it can’t create jobs, oil, tools, collateral or productivity out of thin air.

The abyss between the Fed’s illusion of phantom wealth for Wall Street and the collapse of Main Street is bottomless, and our descent into the abyss is accelerating.